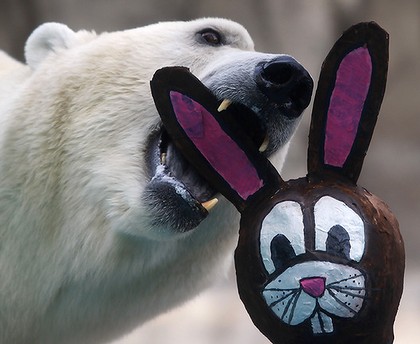 Wednesday update... we came close enough to the 118.55 SPY FP I believe, and should roll over tomorrow.  I made a mistake in yesterday's video about the Initial Claims and Continuing Claims numbers, as they aren't released until tomorrow morning.  Since we have already went up and got the short term charts all oversold, I now expect the numbers to disappoint and be blamed for the selloff.

The charts say we roll over tomorrow, with or without the claims numbers... but the media will likely blame it on them, as they have too report something I guess?  Anyway, I'm looking for selling in the morning at least.  How deep it goes will be based on the data released.  If they aren't too bad, then we shouldn't fall too far.  We got many downside FP's toward the last hour of the day, and most are in the upper 116 level on the spy.  I do think we will hit them tomorrow.  As for Friday... I don't yet?

And they look pretty hungry to me...  (Is this really an Easter Bunny, or a Bull hiding in a bunny costume?)

Finally, the market had a nice sell off... but will it continue?  Stay tuned for next weeks episode of "As The World Turns"... Ugggh, sorry!  I got side tracked on that last sentence.  Sometimes my mind just takes me off on another trail.  LOL.

So, to finish the last sentence in my video... "under normal circumstances, I'm looking for a pause day tomorrow".  But, (and there's always a "but" it seems... wonder why?), since the Fed's are so hell bent on stopping the market from a natural sell off, I'd say we are going to rally tomorrow on better then expected Initial Claims and Continuing Claims numbers, as well as the Fed's Beige Book report.

Now, it's going to be more of a "gut feeling" about going short about that Noon time period, as we need to see how the market is acting.  If it's trading mostly sideways, with only a small rally, then we will likely fall into the close and/or Thursday as well.

But if it moves up hard and fast, going higher then anyone expects, then the shorts are getting squeezed badly and we might have too wait until Thursday for the 30 and 60 minute charts to get really overbought again.  That might take the market up to that 118.55 spy FP we got today?

I don't know for sure of course, but those intraday print are usually hit within 1-3 days.  It's going to be more on just a feel for the market tomorrow, as predicting it solely based on the charts is not working in a heavily manipulated market... like the one we live in!

Just remember, sideways trading during the POMO time period equals a "bear flag", and the market should fall in the afternoon, when the short term charts reset themselves and get top heavy again.

But, a sharp move up during the morning session could set up the market for a continued move up on Thursday too... which would allow it to reach that 118.55 spy FP, should they plan on hitting it this week?  Maybe it is meant for another time period?  Hard too say at this point.

Just hang out on the blog and read the comments as usual, and I'll let you know my thoughts when the market gives me some clues.  For now, I'd expect a flat to up day tomorrow.  But more selling is coming, so don't buy into any bullish ideas that this "one day" correction reset the larger time frame charts, and we are going to rally up to new highs now... they are all still very overbought!