The recent mini-crash we had on August 24th, 2015, as forecasted in the movie Lucy on Scarlett Johansson's passport expiration date, and told here in the previous post 2 months before the event will be just a blip when compared to what is coming in 2016.

While I'm not positive on whether we have already topped already this year in 2015, or if we have one more slightly higher high coming in 2016, I will say with 100% confidence that we are in for another crash next year.

This coming week we have the Evil Reptilian Pope coming to visit the White House on September 22, 2015 (http://www.popefrancisvisit.com/schedule/arrival-in-washington-d-c/)... which I can't see as anything positive.  This satan worshiping snake is surely making some kind of evil deal with our gangster run government leaders.  What it is, I don't know?  But it's clear to me that we are nearing the ending period for this stock market as when these people meet it's never good for us sheep.  I'm not saying we are going to crash right after he meets but it's coming soon thereafter... like within a few months.

Over in China we have their government banning shorting their stock market back in July of this year (http://www.theguardian.com/world/2015/jul/09/china-bans-major-shareholders-from-selling-their-stakes-for-next-six-months), which spells disaster in my mind.  When you don't let traders short the market you don't have any bears to squeeze, and that means you don't have any way to rally a market up from a sell off except for tricking the sheep into buying, and that's probably not possible after you scare them with a big drop.

Next to the sheep buying you have the big institutions buying the sell off, but they aren't dumb either and won't buy it without seeing some trapped shorts to squeeze... which of course gets the market going up big time as they all have to cover at a loss.  This is exactly how over here in America our government has keep they market up as high as it's at now.  Without shorts in the market to squeeze you will go "no bid" and just crash... and that is precisely what's been happening in China.  And I don't think it's over with yet.  When America crashes next year China will go down again.

There's your clues in the news that tell you the stage is set to crash in 2016!

Looking at the technical picture we have the monthly chart now looking a lot like it did in 2000 and 2007 before it crashed the following year.  The rising channel lines drawn on that chart point to about the 1820 area for the lower rising blue trendline to be support if this month of September were to go down further.  So, we should expect that level to hold on a monthly close on it's first hit of that trendline. 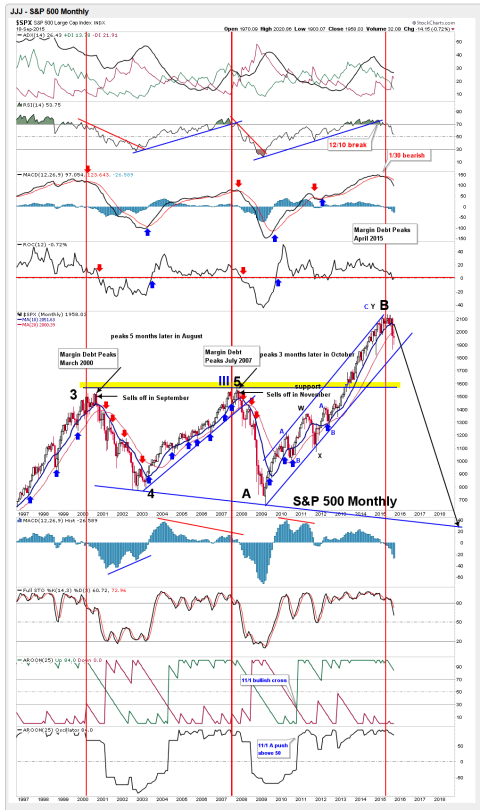 With the current down trendline being labeled Primary Wave 4 down by Tony Caldaro I'll continue to refer to it that way as well since his Elliotwave count seems to be the most accurate I've found.  Not that I trade off of it on a day to day basis as I find it mostly helpful in seeing what's behind us and not too predictive for the futures due to it's many alternative wave counts.

Since I focus mostly on the technical analysis side of charting and not so much on the Elliotwave side I will say that from a TA side I don't see any new high coming and instead think we'll make a lower high on this Primary Wave 5 rally.  In fact, I would not be surprised if they don't have some tricky big squeeze up for the month of October, peaking in early November for this final wave up.

Of course we'll find support a the 2009 low of 666 first before it finally breaks and drops to the low 400's on the SPX, but that's too far out to predict right now.  We only know that the evil gangsters who run the world want to create their insane New World Order where we sheep are even bigger slaves (and much poorer) then we already all.  They want full control of every aspect of our lives, and crashing to the 1050-1100 SPX area doesn't seem too me to be deep enough to get the sheep into putting chips in their head or hands for the "Mark of the Beast" as foretold in the Bible.

It would scare the sheep into giving up all their last freedoms to be saved from the severe poverty state that Satan's minions would put them into with a stock market wipeout like that!  Naturally I don't want to see that happen, but I can't control it... I can only warn people that it is possible.  It's possible from not only a charting point of view using technical analysis, but also from an "end times" model that we appear to be in right now... or at least those that rule the world think we are in.

Moving back to the short term I think we'll have a low in the market in the first week of October of this year.  It should be a lower low then the recent 1867 SPX low on August 24th, but I'm not expecting something crazy like 1700 or so... like many others are forecasting due to the Shemitah September 28th date and the Blood Moon that happens too.  I'm thinking in the low 1800 area for that bottom into early October.

Then we rally into mid to late October, topping out early November and dropping again the rest of that month with some bottom near the end of it and then the December Santa Claus rally starts until the first of 2016.

How low we go in November is not known yet?

Since Primary Wave 5 up should take 2-6 months I'd think we don't take out the expected Primary Wave 4 low around the low 1800's, but some massive squeeze up to 2100 SPX in October could change my mind?  I'd rather see some steady 3 wave (ABC) pattern up to 2100 by the end of this year instead, because that would line up more inside the 2-6 months window for Primary Wave 5 up.

Doing the entire move in one month (October) would be very unusual and should then lead to a drop in November well below 1800 with the 1700's being the target zone.  I personally don't think that will happen though, but I did want to point it out as "possible".  Just visit this blog post daily to see new updated comments to stay up to date.

While it's possible to make a new "higher high" for Primary Wave 5 up I just don't see it in the charts... from a technical point of view of course.  The only thing that would make me believe we could see a "higher high" for Primary Wave 5 up is for the month of September to close above 2000 SPX, and I just don't think that will happen with the next 2 weeks being so bearish as seen in this chart below. 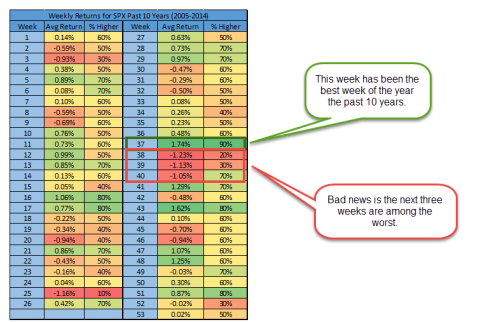 We just had the Fed's big September FOMC meeting where everyone expected them to raise interest rates and they announced that they wouldn't be doing that just yet.  We sold off from that positive news, and that's not a good sign.  If there was anything that should have been used to rally the market up to above 2100 by the end of September it would have been that good news.

Instead they did the announcement in the middle of September knowing very ware that the market would sell off after the news and drop lower into the end of the month.  If they planned to extend this stock market higher into next year they would have made sure to give out some positive news near the end of this month to close it above it's 20 Month Moving Average... which is currently at 2000 SPX.

Here's a post done by Amateur Investor showing what happened in the past when the market makes 2 closes below the 20 Month MA.

As I talked about last weekend there have only be "5" times since 1900 when the following conditions have been met.

Prior to the most recent event these conditions were met in January of 2008, April of 2000, August of 1998 and October of 1929.  This month will be pivotal for the S&P 500 depending on whether it closes a 2nd Month in a row below its 20 Month Moving Average or not.

Let's see what happened with the prior "4" events and the 20 Month Moving Average.  Starting with the last event in late 2007/early 2008 there were "2" monthly closes below the 20 Month MA in January and February of 2008.  In this case the S&P 500 rallied back to its 20 Month MA which was then followed by another significant drop (points A to B).

Meanwhile in the Fall of 1998 notice the S&P 500 failed to close below its 20 Month MA in September and October although it did briefly drop below it two months in a row (point E).   This was then followed by another significant rally through the Spring of 1999 (points E to F).

Finally the last event was in the Fall of 1929 as the S&P closed below its 20 Month MA in October and November.  In this case the S&P rallied back to its 20 Month MA before another sharp sell off occurred (points F to G).

Currently the 20 Month MA in the S&P 500 is at 1999 sp this value won't change much over the next three weeks.  Thus this will be a key level to watch by the end of the month and may have significant implications for the market in the future depending on whether the S&P 500 closes above or below it.

Clearly you can see that odds are very low that we'll make a higher high with Primary Wave 5 up when you have 2 monthly closes below the 20 Month MA... which I think we'll see by the end of this month.

To summarize, I'm looking for this week and next week to go down to make a lower low (then the 1867 SPX August 24th low) to complete Primary Wave 4 down.  Then a rally into mid-late October for the first wave A up of Primary Wave 5... which should be somewhere in the 1950-2000 range I suspect.  After that we should see a B wave down (inside Primary Wave 5 up) to lure in some more bears and scare the bulls out.  This should NOT break the low of Primary Wave 4 down.  Possible targets are 1850-1900 area.  This should end in mid-late November.  Finally we should have a C wave up (inside Primary Wave 5 up) that I suspect will reach around 2100 by the end of this year.