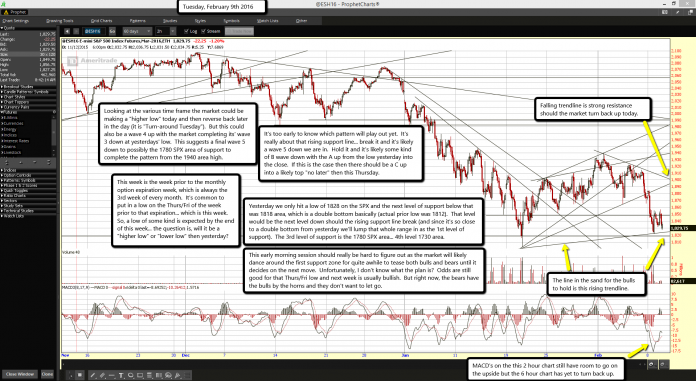 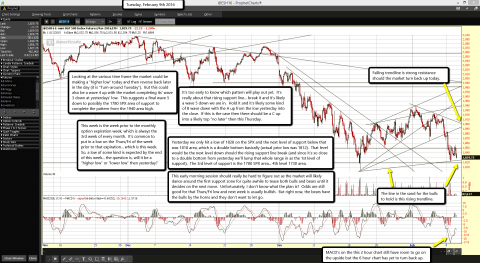 Falling trendline is strong resistance should the market turn back up today.

The line in the sand for the bulls to hold is this rising trendline.

MACD's on the this 2 hour chart still have room to go on the upside but the 6 hour chart has yet to turn back up.

Looking at the various time frame the market could be making a "higher low" today and then reverse back later in the day (it is "Turn-around Tuesday").  But this could also be a wave 4 up with the market completing its' wave 3 down at yesterdays' low.  This suggests a final wave 5 down to possibly the 1780 SPX area of support to complete the pattern from the 1940 area high.

It's too early to know which pattern will play out yet.  It's really about that rising support line... break it and it's likely a wave 5 down we are in.  Hold it and it's likely some kind of B wave down with the A up from the low yesterday into the close.  If this is the case then there should be a C up into a likely top "no later" then this Thursday.

This week is the week prior to the monthly option expiration week, which is always the 3rd week of every month.  It's common to put in a low on the Thurs/Fri of the week prior to that expiration... which is this week.  So, a low of some kind is expected by the end of this week... the question is, will it be a "higher low" or "lower low" then yesterday?

This early morning session should really be hard to figure out as the market will likely dance around the first support zone for quite awhile to tease both bulls and bears until it decides on the next move.  Unfortunately, I don't know what the plan is?  Odds are still good for that Thurs/Fri low and next week is usually bullish.  But right now, the bears have the bulls by the horns and they don't want to let go.