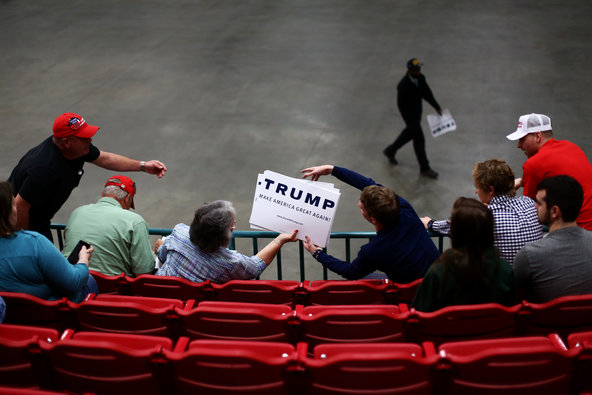 Signs were passed around Monday before a Trump rally in Concord, N.C.Credit Travis Dove for The New York Times

Donald J. Trump has been boasting that his contentious Trump University educational program earned an “A” rating from the Better Business Bureau, but the bureau says it has no rating at all.

Mr. Trump, who holds the lead in delegates for the Republican presidential nomination, is facing a civil fraud lawsuit over Trump University, which was renamed the Trump Entrepreneur Initiative in 2010. Customers have complained that the course was a hoax.

Mr. Trump’s Republican opponents have pounced on the issue as an example of Mr. Trump employing shady business practices. During a debate last week. Mr. Trump insisted that after receiving a “D-minus” from the Better Business Bureau, the program’s rating improved to an “A” once it supplied the necessary paperwork.

He released a three-minute video on YoutTube on Monday explaining the situation.

“We have an ‘A’ rating, not a ‘D-minus’ rating,” Mr. Trump said, holding up a document that showed the Better Business Bureau giving his business an “A.”

But the bureau, a nonprofit organization, said on Tuesday that Trump University had had “no rating” since September and that the document that was circulating on social media appeared to be old. Meanwhile, it suggested that the improvement in Trump University’s rating was because the program was winding down, not because customers were happier with the product.

Trump University’s rating improved to an “A” in 2014 because reviews roll off of its system after three years.

Hope Hicks, a spokeswoman for the Trump campaign, disputed the notion that there had been any problems with Mr. Trump’s education initiative.

“They gave the program a rating, and they admit that the rating was an ‘A+,'” Ms. Hicks said. “Any lower ratings were given prior to the submission of documentation and other applicable paperwork. Once submitted, the program was awarded an even higher rating than previously shared.”

The Trump campaign did not comment on whether the Trump Entrepreneur Initiative was still operating. The organization’s sparse website offers a login for existing members. The telephone number supplied by Mr. Trump in his “Trump University Truth” video was not in service on Tuesday.