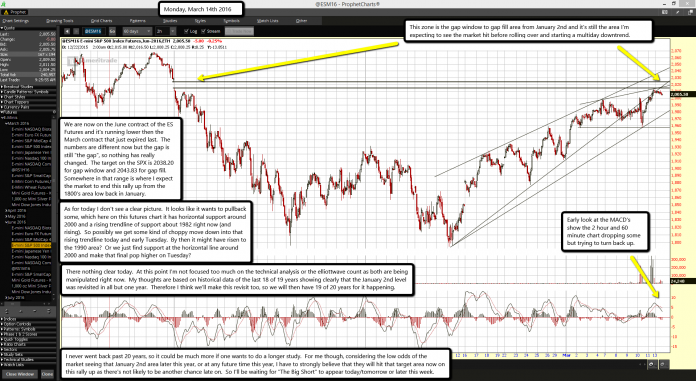 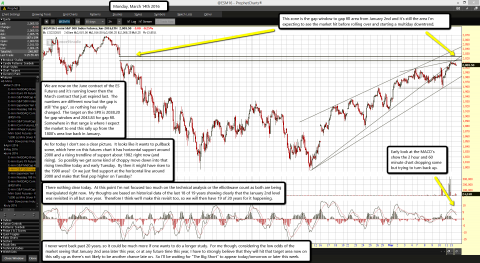 This zone is the gap window to gap fill area from January 2nd and it's still the area I'm expecting to see the market hit before rolling over and starting a multiday downtrend.

Early look at the MACD's show the 2 hour and 60 minute chart dropping some but trying to turn back up.

We are now on the June contract of the ES Futures and it's running lower then the March contract that just expired last.  The numbers are different now but the gap is still "the gap", so nothing has really changed.  The target on the SPX is 2038.20 for gap window and 2043.83 for gap fill.  Somewhere in that range is where I expect the market to end this rally up from the 1800's area low back in January.

As for today I don't see a clear picture.  It looks like it wants to pullback some, which here on this futures chart it has horizontal support around 2000 and a rising trendline of support about 1982 right now (and rising).  So possibly we get some kind of choppy move down into that rising trendline today and early Tuesday.  By then it might have risen to the 1990 area?  Or we just find support at the horizontal line around 2000 and make that final pop higher on Tuesday?

There nothing clear today.  At this point I'm not focused too much on the technical analysis or the elliottwave count as both are being manipulated right now.  My thoughts are based on historical data of the last 18 of 19 years showing clearly that the January 2nd level was revisited in all but one year.  Therefore I think we'll make this revisit too, so we will then have 19 of 20 years for it happening.

I never went back past 20 years, so it could be much more if one wants to do a longer study.  For me though, considering the low odds of the market seeing that January 2nd area later this year, or at any future time this year, I have to strongly believe that they will hit that target area now on this rally up as there's not likely to be another chance late on.  So I'll be waiting for "The Big Short" to appear today/tomorrow or later this week.