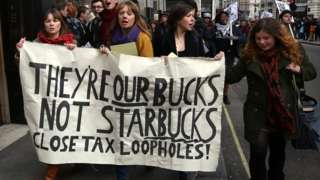 "Tax-dodging" has become a catch-all term for a range of different practices by individuals and companies.

The "Panama Papers" have focused attention on individuals' use of low-tax, low-regulation jurisdictions. But even before that, the public mood was shifting against the strategies that companies use to minimise their tax bills.

The European Commission has now announced its plans to clamp down on corporate practices that are reducing tax bills, as has the OECD. So what reforms are currently in train to tackle the issue?

What is the problem?

Several multinational companies have been in the headlines over tax. In Europe, Starbucks, Amazon, Apple and Fiat have all been investigated by the European Commission, as have many other companies.

Critics accuse the wealthy global elite of playing by different rules.  For example, last October it was revealed that in the UK Facebook paid £4,327 ($6,165) in corporation tax in 2014, less than the average tax bill for a UK worker.

Other countries have also expressed concerns.

What is being done about it?

Sally Jones, tax director at Deloitte, says "astonishing" progress has been made over the last few years.

The Organization for Economic Co-operation and Development (OECD) - a leading economic think-tank - has led the way.

The first is transfer pricing. New guidelines produced by the OECD make sure that there is a connection between a company's business operations, the amount of value it creates and where it books its profits.

These are not new rules but clarify and improve existing ones and they are considered to be a big step forward. The UK's tax law now refers directly to the OECD guidelines to define transfer pricing.

The second change is country-by-country reporting. This requires companies to report the tax they pay, profits, number of employees and some other key pieces of financial information to the tax authority where they are headquartered.

This information is not released to the public, but tax authorities from other countries can ask to see it. Country-by-country reporting came in for UK-based multi-national companies from January this year.

Thirdly, in order to tackle so-called "sweetheart deals" (arranged on a case-by-case basis between a tax authority and a company) any individually arranged deals will be available to other tax authorities for scrutiny.

What exactly is transfer pricing?

For example the European Commission argues that Starbucks was buying coffee beans from its own Swiss subsidiary at an inflated price. That meant Starbucks in Switzerland (a relatively low-tax country) was making more profits, Starbucks in other European countries were making less.

Do the EU rules go further?

The EU Commission says its proposals - not yet approved by EU governments - build on the OECD reforms.

Big multinationals with annual global revenues above €750m (£599m; $853m) would have to open their accounts to public scrutiny - not just to the tax authorities. That would include giants like Google and Starbucks.

They would have to report their EU profits country-by-country. And for those operating in tax havens - in the Commission's phrase, "jurisdictions that don't abide by international good governance standards on tax" - the same detailed reporting rules would apply.

Some business groups complain that such measures will force companies to reveal commercially sensitive information.

And the EU does not yet have an agreed blacklist of tax havens - though it has pledged to put one in place.

The EU says its proposals would cover about 6,500 businesses and 90% of multinational revenues. The European Network on Debt and Development - campaigning for tax justice - disputes that 90% figure, however.

Transparency International said the proposals fell short of true tax transparency and companies would still be able to avoid public scrutiny outside the EU.

There is significant political will behind the changes, with 31 countries signing up to share country-by-country reports in January.

The G20 leaders and finance ministers have all agreed to the OECD's 15-point plan in principle, including China and the United States.

One international tax expert said it seemed China "fully intends to implement" the proposals, but added they seemed to be "about six months off the pace".  The OECD has been working on new tax rules for over two years

US President Barack Obama's administration and US tax authorities are locked in a battle with Congress over who has the right to implement the changes, with the Republican-dominated legislature resisting as the Obama administration tries to push them through.

But progress is certainly being made.  There has been a change in the way the global tax system works and companies are responding. One tax expert who advises some of Britain's biggest companies said: "It's going to change things massively. I talk to these companies on a daily basis about what they need to do to meet this new standard and they are really taking it seriously.

"They know this is the landscape now. This is the way things are and none of them wants to be the company that ends up on the front page of a newspaper for failing to comply with the rules."

What exactly is "tax-dodging"?

Companies and individuals minimise the amount of tax they pay in numerous ways, some are legal, some are not.

Tax planning: Using rules set by government to do things we're supposed to do is tax planning. It is not just ok, but positively encouraged. That ranges from incentives to save for your retirement, to tax breaks that entice companies to invest.

Tax avoidance is legal but means using tax laws in a way that was not intended when they were written. You're ok by the letter of the law if you're avoiding tax, but you're not playing fair. This casts tax planning as a battle of wits and your own conscience.

Tax evasion Tax evasion is illegal. Evading tax is breaking the law to reduce your tax bill and it is a criminal offense. The UK tax authority - HMRC - says it has taken on an extra 200 investigators since 2010 and it prosecuted 1,165 people for tax evasion in 2014/15, up from just 165 in 2010/11. Tax evasion by companies is quite rare.