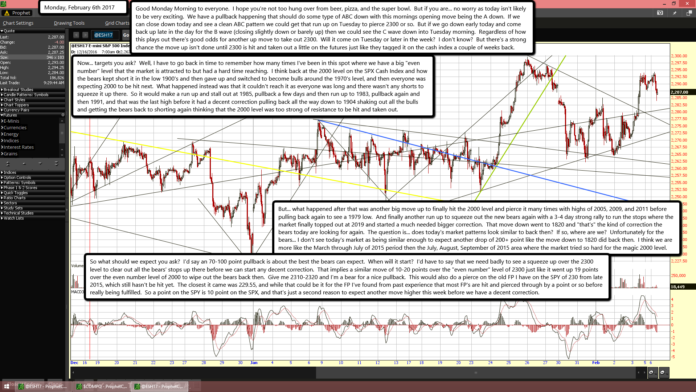 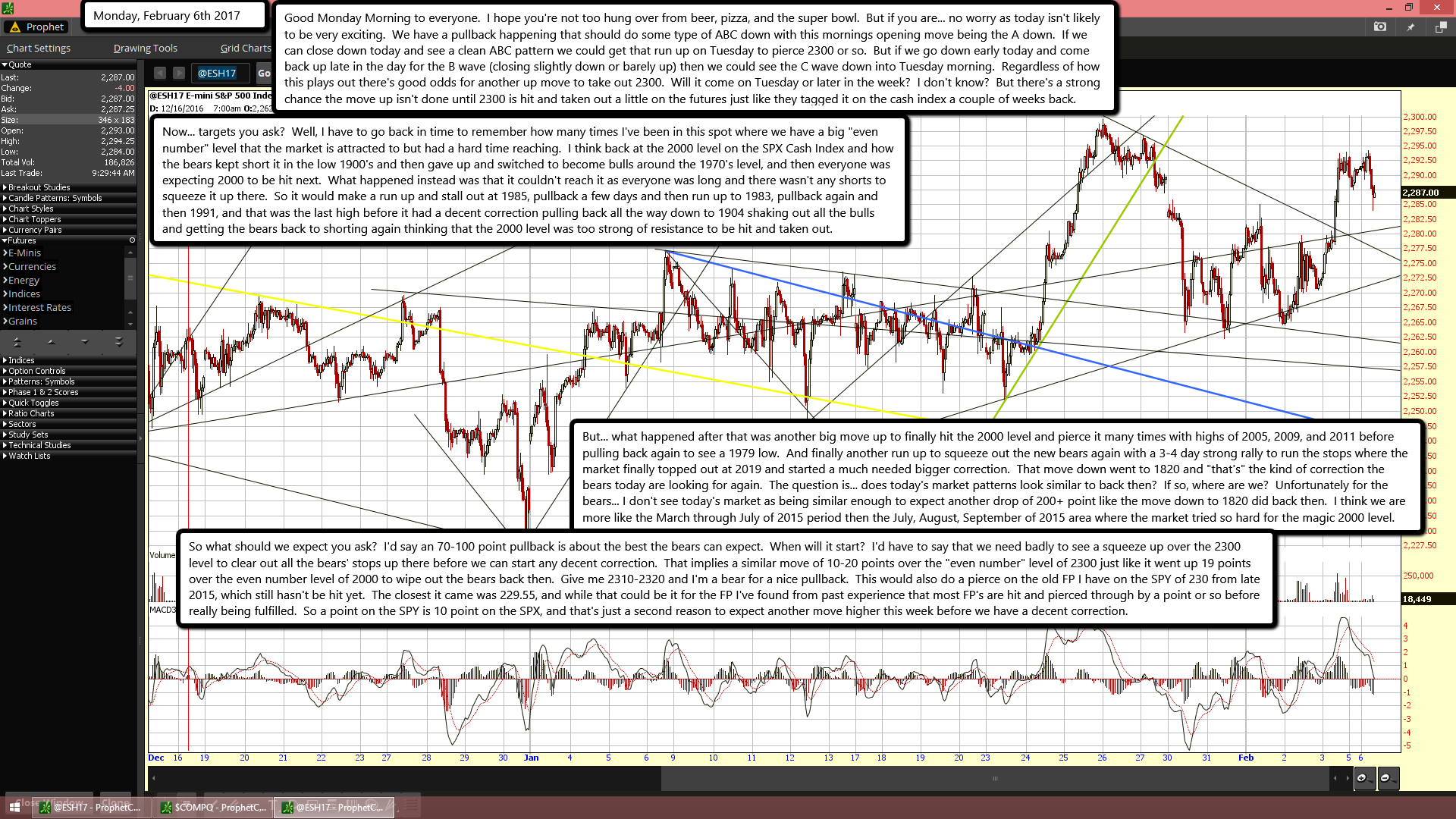 Good Monday Morning to everyone.  I hope you're not too hung over from beer, pizza, and the super bowl.  But if you are... no worry as today isn't likely to be very exciting.  We have a pullback happening that should do some type of ABC down with this mornings opening move being the A down.  If we can close down today and see a clean ABC pattern we could get that run up on Tuesday to pierce 2300 or so.  But if we go down early today and come back up late in the day for the B wave (closing slightly down or barely up) then we could see the C wave down into Tuesday morning.  Regardless of how this plays out there's good odds for another up move to take out 2300.  Will it come on Tuesday or later in the week?  I don't know?  But there's a strong chance the move up isn't done until 2300 is hit and taken out a little on the futures just like they tagged it on the cash index a couple of weeks back.

Now... targets you ask?  Well, I have to go back in time to remember how many times I've been in this spot where we have a big "even number" level that the market is attracted to but had a hard time reaching.  I think back at the 2000 level on the SPX Cash Index and how the bears kept short it in the low 1900's and then gave up and switched to become bulls around the 1970's level, and then everyone was expecting 2000 to be hit next.  What happened instead was that it couldn't reach it as everyone was long and there wasn't any shorts to squeeze it up there.  So it would make a run up and stall out at 1985, pullback a few days and then run up to 1983, pullback again and then 1991, and that was the last high before it had a decent correction pulling back all the way down to 1904 shaking out all the bulls and getting the bears back to shorting again thinking that the 2000 level was too strong of resistance to be hit and taken out.

But... what happened after that was another big move up to finally hit the 2000 level and pierce it many times with highs of 2005, 2009, and 2011 before pulling back again to see a 1979 low.  And finally another run up to squeeze out the new bears again with a 3-4 day strong rally to run the stops where the market finally topped out at 2019 and started a much needed bigger correction.  That move down went to 1820 and "that's" the kind of correction the bears today are looking for again.  The question is... does today's market patterns look similar to back then?  If so, where are we?  Unfortunately for the bears... I don't see today's market as being similar enough to expect another drop of 200+ point like the move down to 1820 did back then.  I think we are more like the March through July of 2015 period then the July, August, September of 2015 area where the market tried so hard for the magic 2000 level.

So what should we expect you ask?  I'd say an 70-100 point pullback is about the best the bears can expect.  When will it start?  I'd have to say that we need badly to see a squeeze up over the 2300 level to clear out all the bears' stops up there before we can start any decent correction.  That implies a similar move of 10-20 points over the "even number" level of 2300 just like it went up 19 points over the even number level of 2000 to wipe out the bears back then.  Give me 2310-2320 and I'm a bear for a nice pullback.  This would also do a pierce on the old FP I have on the SPY of 230 from late 2015, which still hasn't be hit yet.  The closest it came was 229.55, and while that could be it for the FP I've found from past experience that most FP's are hit and pierced through by a point or so before really being fulfilled.  So a point on the SPY is 10 point on the SPX, and that's just a second reason to expect another move higher this week before we have a decent correction.