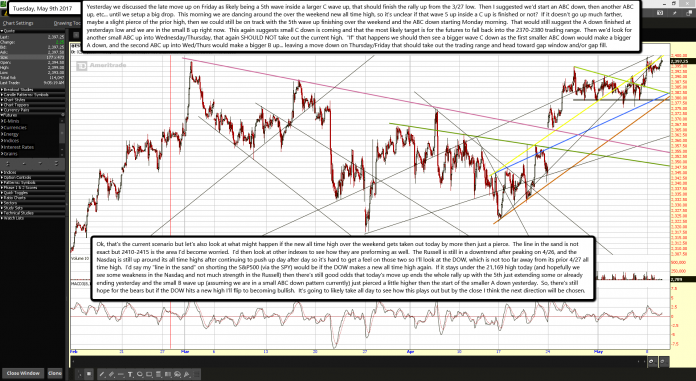 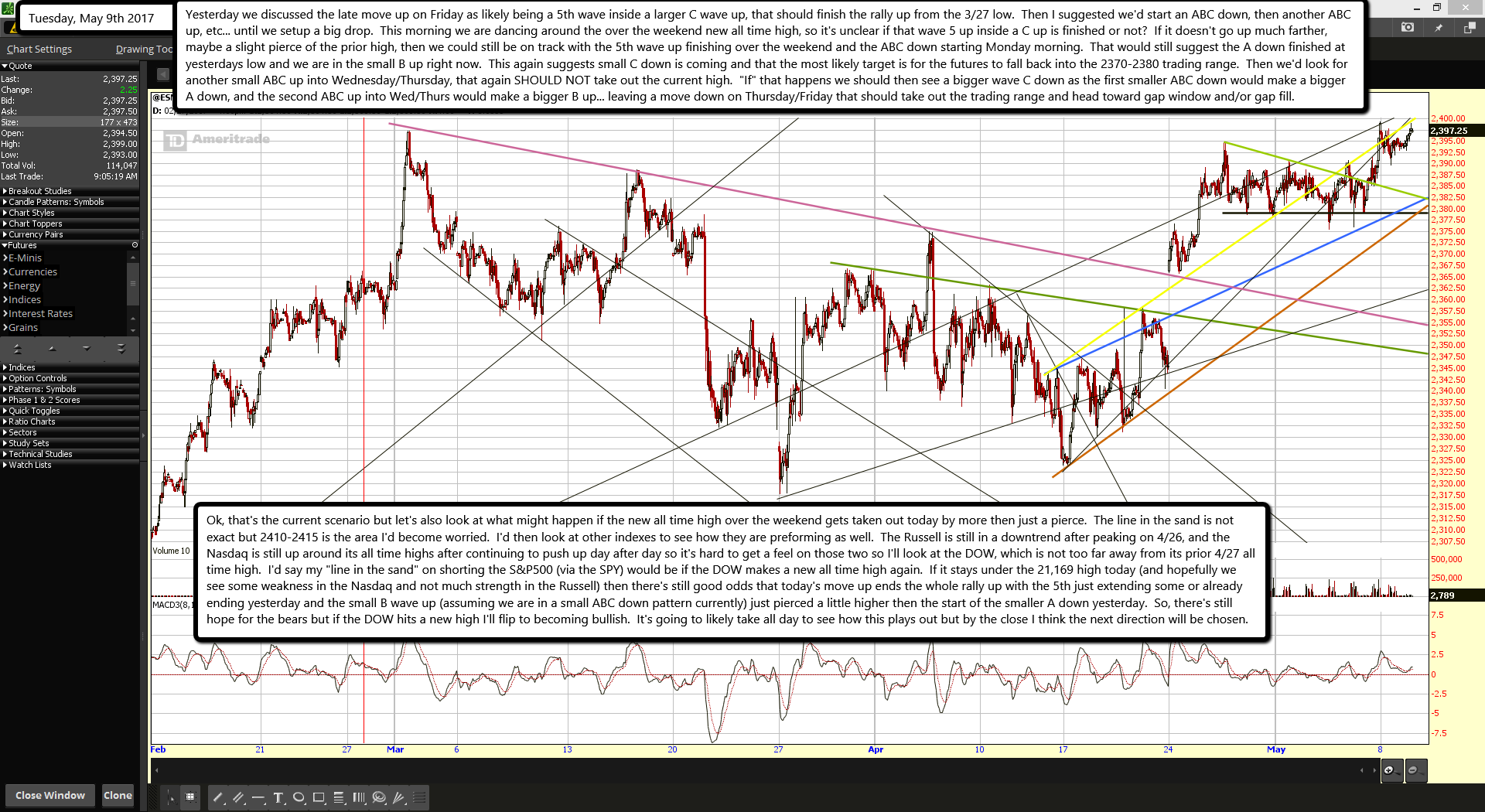 Yesterday we discussed the late move up on Friday as likely being a 5th wave inside a larger C wave up, that should finish the rally up from the 3/27 low.  Then I suggested we'd start an ABC down, then another ABC up, etc... until we setup a big drop.  This morning we are dancing around the over the weekend new all time high, so it's unclear if that wave 5 up inside a C up is finished or not?  If it doesn't go up much farther, maybe a slight pierce of the prior high, then we could still be on track with the 5th wave up finishing over the weekend and the ABC down starting Monday morning.  That would still suggest the A down finished at yesterdays low and we are in the small B up right now.  This again suggests small C down is coming and that the most likely target is for the futures to fall back into the 2370-2380 trading range.  Then we'd look for another small ABC up into Wednesday/Thursday, that again SHOULD NOT take out the current high.  "If" that happens we should then see a bigger wave C down as the first smaller ABC down would make a bigger A down, and the second ABC up into Wed/Thurs would make a bigger B up... leaving a move down on Thursday/Friday that should take out the trading range and head toward gap window and/or gap fill.

Ok, that's the current scenario but let's also look at what might happen if the new all time high over the weekend gets taken out today by more then just a pierce.  The line in the sand is not exact but 2410-2415 is the area I'd become worried.  I'd then look at other indexes to see how they are preforming as well.  The Russell is still in a downtrend after peaking on 4/26, and the Nasdaq is still up around its all time highs after continuing to push up day after day so it's hard to get a feel on those two so I'll look at the DOW, which is not too far away from its prior 4/27 all time high.  I'd say my "line in the sand" on shorting the S&P500 (via the SPY) would be if the DOW makes a new all time high again.  If it stays under the 21,169 high today (and hopefully we see some weakness in the Nasdaq and not much strength in the Russell) then there's still good odds that today's move up ends the whole rally up with the 5th just extending some or already ending yesterday and the small B wave up (assuming we are in a small ABC down pattern currently) just pierced a little higher then the start of the smaller A down yesterday.  So, there's still hope for the bears but if the DOW hits a new high I'll flip to becoming bullish.  It's going to likely take all day to see how this plays out but by the close I think the next direction will be chosen.