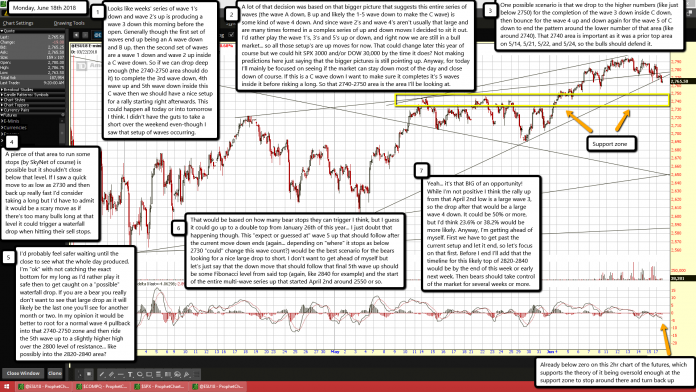 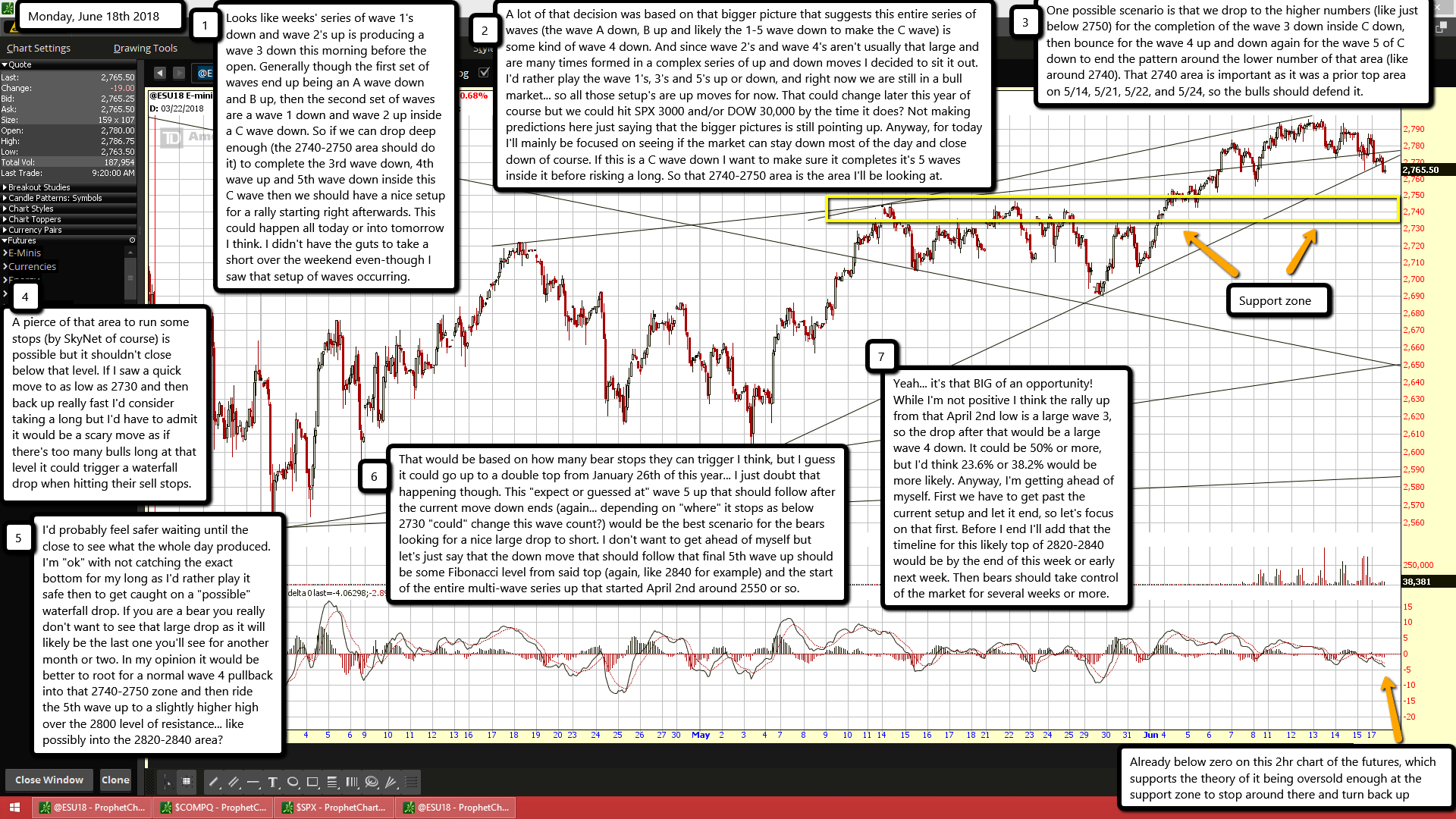 Looks like weeks' series of wave 1's down and wave 2's up is producing a wave 3 down this morning before the open. Generally though the first set of waves end up being an A wave down and B up, then the second set of waves are a wave 1 down and wave 2 up inside a C wave down. So if we can drop deep enough (the 2740-2750 area should do it) to complete the 3rd wave down, 4th wave up and 5th wave down inside this C wave then we should have a nice setup for a rally starting right afterwards. This could happen all today or into tomorrow I think. I didn't have the guts to take a short over the weekend even-though I saw that setup of waves occurring.

A lot of that decision was based on that bigger picture that suggests this entire series of waves (the wave A down, B up and likely the 1-5 wave down to make the C wave) is some kind of wave 4 down. And since wave 2's and wave 4's aren't usually that large and are many times formed in a complex series of up and down moves I decided to sit it out. I'd rather play the wave 1's, 3's and 5's up or down, and right now we are still in a bull market... so all those setup's are up moves for now. That could change later this year of course but we could hit SPX 3000 and/or DOW 30,000 by the time it does? Not making predictions here just saying that the bigger pictures is still pointing up. Anyway, for today I'll mainly be focused on seeing if the market can stay down most of the day and close down of course. If this is a C wave down I want to make sure it completes it's 5 waves inside it before risking a long. So that 2740-2750 area is the area I'll be looking at.

A pierce of that area to run some stops (by SkyNet of course) is possible but it shouldn't close below that level. If I saw a quick move to as low as 2730 and then back up really fast I'd consider taking a long but I'd have to admit it would be a scary move as if there's too many bulls long at that level it could trigger a waterfall drop when hitting their sell stops.

I'd probably feel safer waiting until the close to see what the whole day produced. I'm "ok" with not catching the exact bottom for my long as I'd rather play it safe then to get caught on a "possible" waterfall drop. If you are a bear you really don't want to see that large drop as it will likely be the last one you'll see for another month or two. In my opinion it would be better to root for a normal wave 4 pullback into that 2740-2750 zone and then ride the 5th wave up to a slightly higher high over the 2800 level of resistance... like possibly into the 2820-2840 area?

That would be based on how many bear stops they can trigger I think, but I guess it could go up to a double top from January 26th of this year... I just doubt that happening though. This "expect or guessed at" wave 5 up that should follow after the current move down ends (again... depending on "where" it stops as below 2730 "could" change this wave count?) would be the best scenario for the bears looking for a nice large drop to short. I don't want to get ahead of myself but let's just say that the down move that should follow that final 5th wave up should be some Fibonacci level from said top (again, like 2840 for example) and the start of the entire multi-wave series up that started April 2nd around 2550 or so.

Yeah... it's that BIG of an opportunity! While I'm not positive I think the rally up from that April 2nd low is a large wave 3, so the drop after that would be a large wave 4 down. It could be 50% or more, but I'd think 23.6% or 38.2% would be more likely. Anyway, I'm getting ahead of myself. First we have to get past the current setup and let it end, so let's focus on that first. Before I end I'll add that the timeline for this likely top of 2820-2840 would be by the end of this week or early next week. Then bears should take control of the market for several weeks or more.