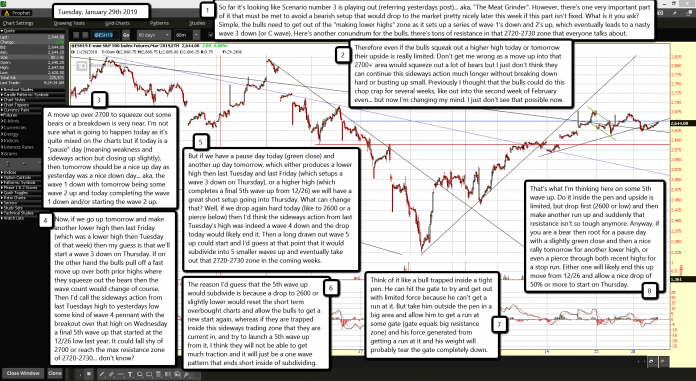 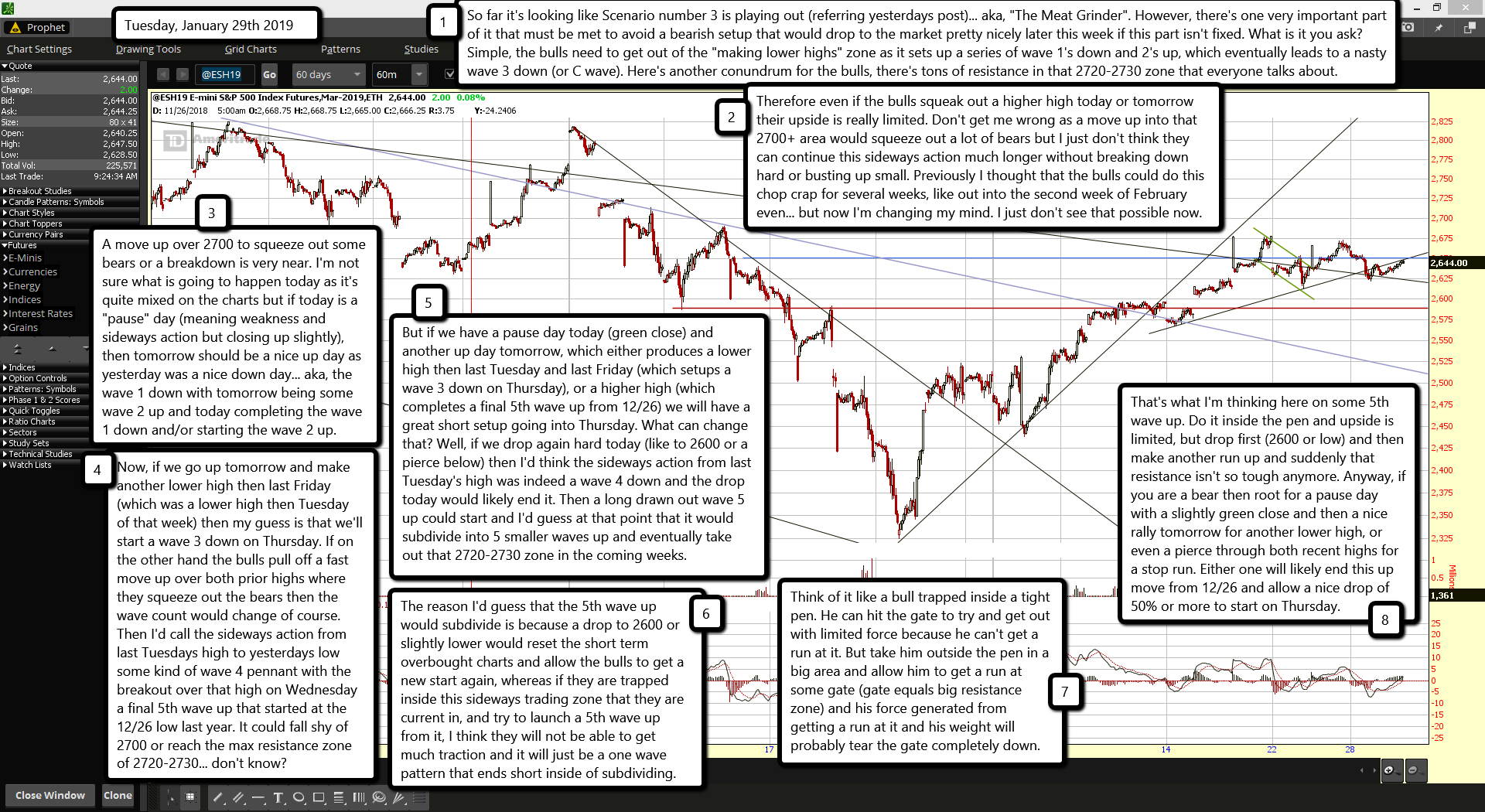 So far it's looking like Scenario number 3 is playing out (referring yesterdays post)... aka, "The Meat Grinder". However, there's one very important part of it that must be met to avoid a bearish setup that would drop to the market pretty nicely later this week if this part isn't fixed. What is it you ask? Simple, the bulls need to get out of the "making lower highs" zone as it sets up a series of wave 1's down and 2's up, which eventually leads to a nasty wave 3 down (or C wave). Here's another conundrum for the bulls, there's tons of resistance in that 2720-2730 zone that everyone talks about.

Therefore even if the bulls squeak out a higher high today or tomorrow their upside is really limited. Don't get me wrong as a move up into that 2700+ area would squeeze out a lot of bears but I just don't think they can continue this sideways action much longer without breaking down hard or busting up small. Previously I thought that the bulls could do this chop crap for several weeks, like out into the second week of February even... but now I'm changing my mind. I just don't see that possible now.

A move up over 2700 to squeeze out some bears or a breakdown is very near. I'm not sure what is going to happen today as it's quite mixed on the charts but if today is a "pause" day (meaning weakness and sideways action but closing up slightly), then tomorrow should be a nice up day as yesterday was a nice down day... aka, the wave 1 down with tomorrow being some wave 2 up and today completing the wave 1 down and/or starting the wave 2 up.

Now, if we go up tomorrow and make another lower high then last Friday (which was a lower high then Tuesday of that week) then my guess is that we'll start a wave 3 down on Thursday. If on the other hand the bulls pull off a fast move up over both prior highs where they squeeze out the bears then the wave count would change of course. Then I'd call the sideways action from last Tuesdays high to yesterdays low some kind of wave 4 pennant with the breakout over that high on Wednesday a final 5th wave up that started at the 12/26 low last year. It could fall shy of 2700 or reach the max resistance zone of 2720-2730... don't know?

But if we have a pause day today (green close) and another up day tomorrow, which either produces a lower high then last Tuesday and last Friday (which setups a wave 3 down on Thursday), or a higher high (which completes a final 5th wave up from 12/26) we will have a great short setup going into Thursday. What can change that? Well, if we drop again hard today (like to 2600 or a pierce below) then I'd think the sideways action from last Tuesday's high was indeed a wave 4 down and the drop today would likely end it. Then a long drawn out wave 5 up could start and I'd guess at that point that it would subdivide into 5 smaller waves up and eventually take out that 2720-2730 zone in the coming weeks.

The reason I'd guess that the 5th wave up would subdivide is because a drop to 2600 or slightly lower would reset the short term overbought charts and allow the bulls to get a new start again, whereas if they are trapped inside this sideways trading zone that they are current in, and try to launch a 5th wave up from it, I think they will not be able to get much traction and it will just be a one wave pattern that ends short inside of subdividing.

Think of it like a bull trapped inside a tight pen. He can hit the gate to try and get out with limited force because he can't get a run at it. But take him outside the pen in a big area and allow him to get a run at some gate (gate equals big resistance zone) and his force generated from getting a run at it and his weight will probably tear the gate completely down.

That's what I'm thinking here on some 5th wave up. Do it inside the pen and upside is limited, but drop first (2600 or low) and then make another run up and suddenly that resistance isn't so tough anymore. Anyway, if you are a bear then root for a pause day with a slightly green close and then a nice rally tomorrow for another lower high, or even a pierce through both recent highs for a stop run. Either one will likely end this up move from 12/26 and allow a nice drop of 50% or more to start on Thursday.