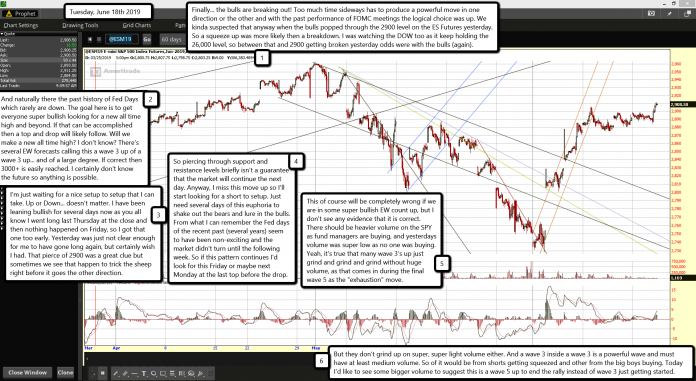 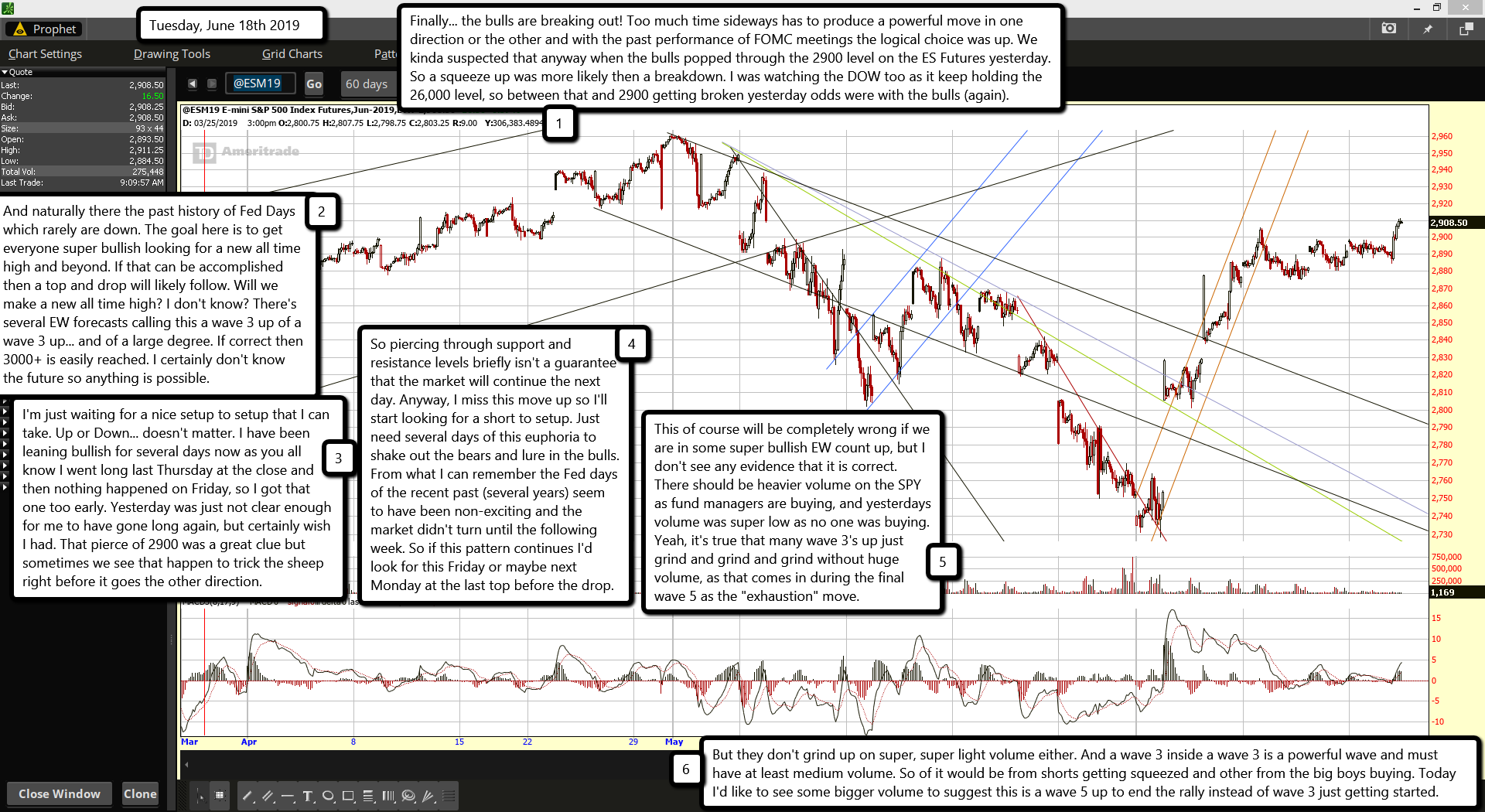 Finally... the bulls are breaking out! Too much time sideways has to produce a powerful move in one direction or the other and with the past performance of FOMC meetings the logical choice was up. We kinda suspected that anyway when the bulls popped through the 2900 level on the ES Futures yesterday. So a squeeze up was more likely then a breakdown. I was watching the DOW too as it keep holding the 26,000 level, so between that and 2900 getting broken yesterday odds were with the bulls (again).

And naturally there the past history of Fed Days which rarely are down. The goal here is to get everyone super bullish looking for a new all time high and beyond. If that can be accomplished then a top and drop will likely follow. Will we make a new all time high? I don't know? There's several EW forecasts calling this a wave 3 up of a wave 3 up... and of a large degree. If correct then 3000+ is easily reached. I certainly don't know the future so anything is possible.

I'm just waiting for a nice setup to setup that I can take. Up or Down... doesn't matter. I have been leaning bullish for several days now as you all know I went long last Thursday at the close and then nothing happened on Friday, so I got that one too early. Yesterday was just not clear enough for me to have gone long again, but certainly wish I had. That pierce of 2900 was a great clue but sometimes we see that happen to trick the sheep right before it goes the other direction.

So piercing through support and resistance levels briefly isn't a guarantee that the market will continue the next day. Anyway, I miss this move up so I'll start looking for a short to setup. Just need several days of this euphoria to shake out the bears and lure in the bulls. From what I can remember the Fed days of the recent past (several years) seem to have been non-exciting and the market didn't turn until the following week. So if this pattern continues I'd look for this Friday or maybe next Monday at the last top before the drop.

This of course will be completely wrong if we are in some super bullish EW count up, but I don't see any evidence that it is correct. There should be heavier volume on the SPY as fund managers are buying, and yesterdays volume was super low as no one was buying. Yeah, it's true that many wave 3's up just grind and grind and grind without huge volume, as that comes in during the final wave 5 as the "exhaustion" move.

But they don't grind up on super, super light volume either. And a wave 3 inside a wave 3 is a powerful wave and must have at least medium volume. So of it would be from shorts getting squeezed and other from the big boys buying. Today I'd like to see some bigger volume to suggest this is a wave 5 up to end the rally instead of wave 3 just getting started.

Basically I just want to see today's volume as shorts getting squeezed, so higher then yesterday, but not high enough to make me think the institutions are buying. It's more of a gut feel thing I guess. Anyway, that's all I have for today. Basically I'm looking for this move up to tire out by tomorrow and chop around into Friday to setup a sell and shake out the bears.