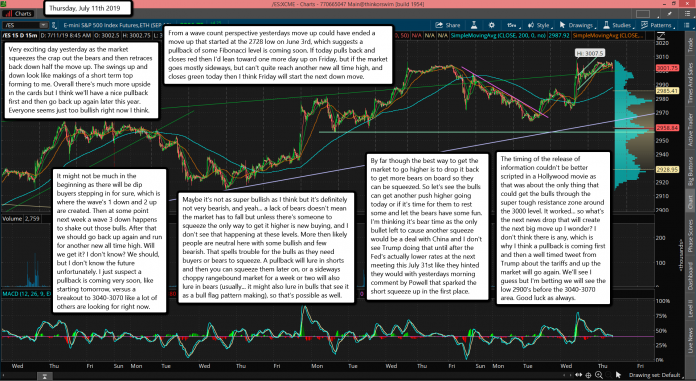 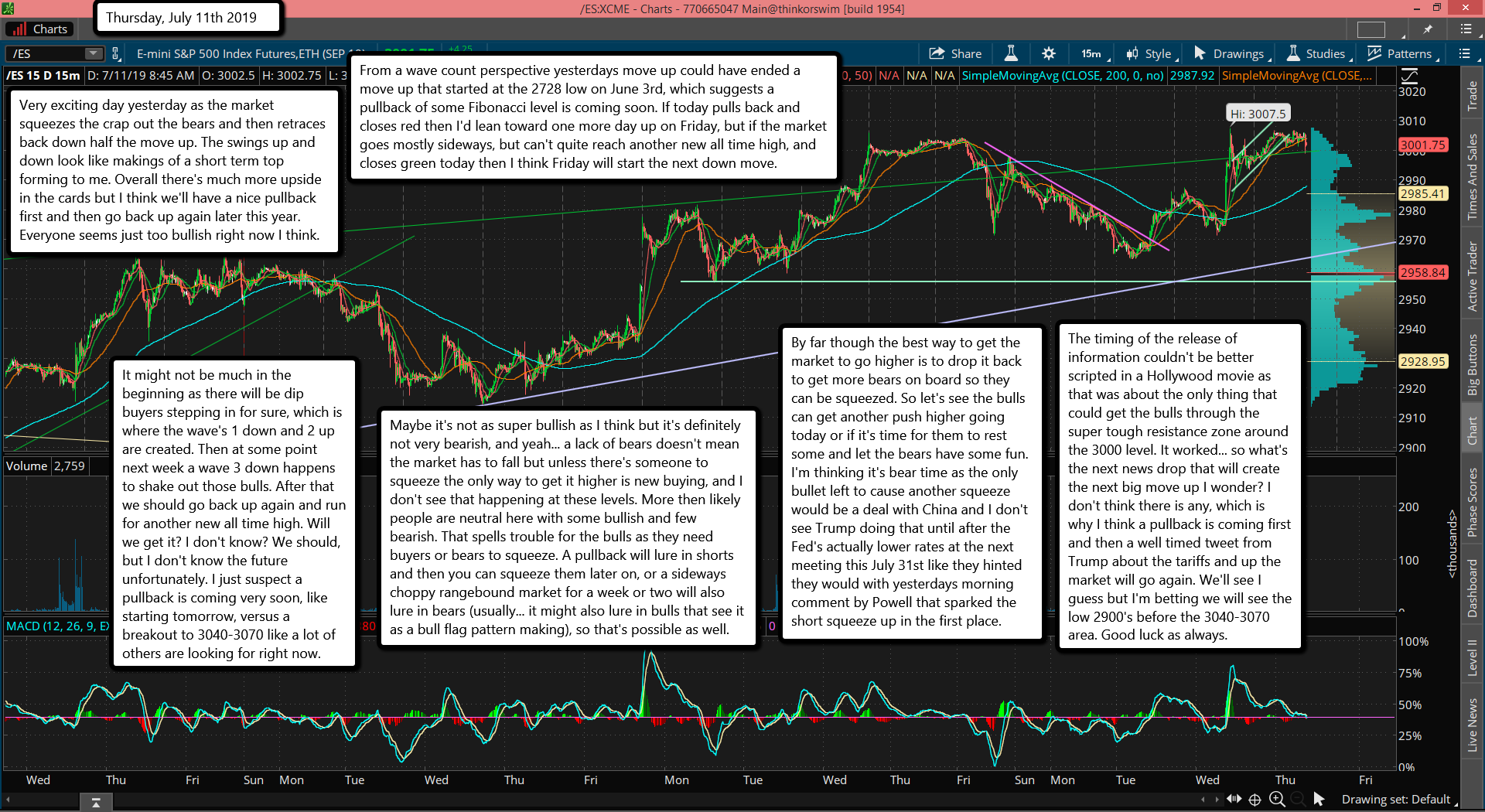 Very exciting day yesterday as the market squeezes the crap out the bears and then retraces back down half the move up. The swings up and down look like makings of a short term top forming to me. Overall there's much more upside in the cards but I think we'll have a nice pullback first and then go back up again later this year. Everyone seems just too bullish right now I think.

From a wave count perspective yesterdays move up could have ended a move up that started at the 2728 low on June 3rd, which suggests a pullback of some Fibonacci level is coming soon. If today pulls back and closes red then I'd lean toward one more day up on Friday, but if the market goes mostly sideways, but can't quite reach another new all time high, and closes green today then I think Friday will start the next down move.

It might not be much in the beginning as there will be dip buyers stepping in for sure, which is where the wave's 1 down and 2 up are created. Then at some point next week a wave 3 down happens to shake out those bulls. After that we should go back up again and run for another new all time high. Will we get it? I don't know? We should, but I don't know the future unfortunately. I just suspect a pullback is coming very soon, like starting tomorrow, versus a breakout to 3040-3070 like a lot of others are looking for right now.

Maybe it's not as super bullish as I think but it's definitely not very bearish, and yeah... a lack of bears doesn't mean the market has to fall but unless there's someone to squeeze the only way to get it higher is new buying, and I don't see that happening at these levels. More then likely people are neutral here with some bullish and few bearish. That spells trouble for the bulls as they need buyers or bears to squeeze. A pullback will lure in shorts and then you can squeeze them later on, or a sideways choppy rangebound market for a week or two will also lure in bears (usually... it might also lure in bulls that see it as a bull flag pattern making), so that's possible as well.

By far though the best way to get the market to go higher is to drop it back to get more bears on board so they can be squeezed. So let's see the bulls can get another push higher going today or if it's time for them to rest some and let the bears have some fun. I'm thinking it's bear time as the only bullet left to cause another squeeze would be a deal with China and I don't see Trump doing that until after the Fed's actually lower rates at the next meeting this July 31st like they hinted they would with yesterdays morning comment by Powell that sparked the short squeeze up in the first place.

The timing of the release of information couldn't be better scripted in a Hollywood movie as that was about the only thing that could get the bulls through the super tough resistance zone around the 3000 level. It worked... so what's the next news drop that will create the next big move up I wonder? I don't think there is any, which is why I think a pullback is coming first and then a well timed tweet from Trump about the tariffs and up the market will go again. We'll see I guess but I'm betting we will see the low 2900's before the 3040-3070 area. Good luck as always.