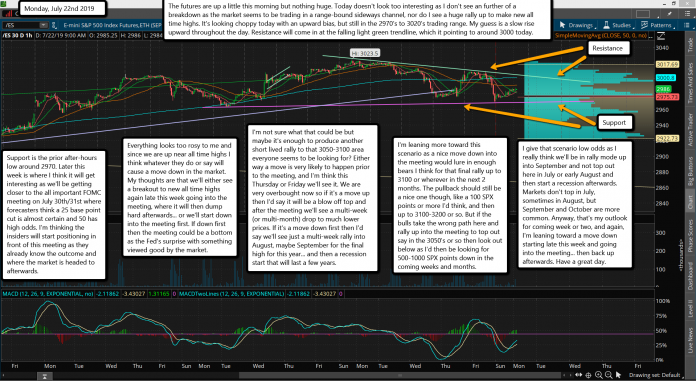 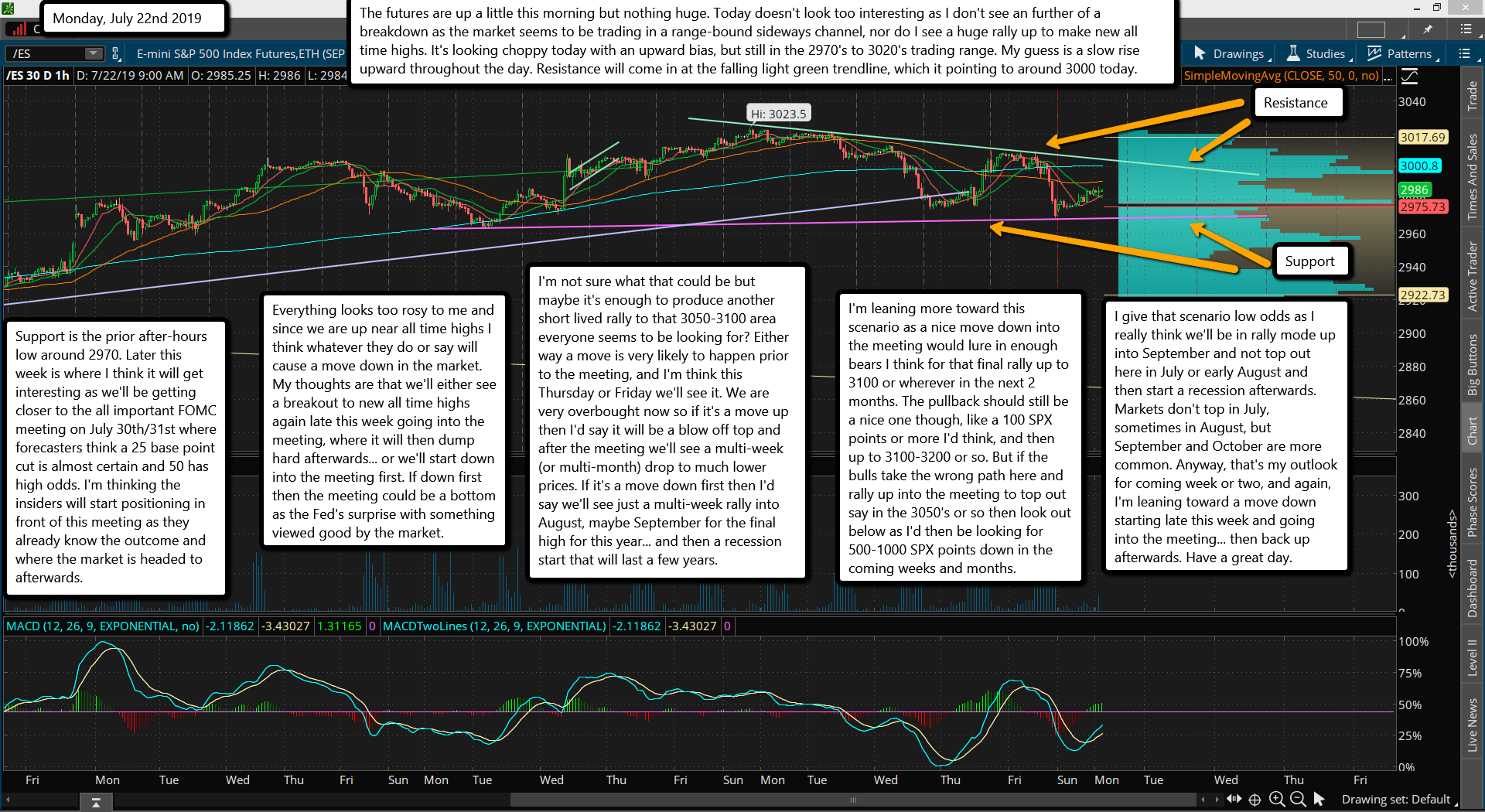 The futures are up a little this morning but nothing huge. Today doesn't look too interesting as I don't see an further of a breakdown as the market seems to be trading in a range-bound sideways channel, nor do I see a huge rally up to make new all time highs. It's looking choppy today with an upward bias, but still in the 2970's to 3020's trading range. My guess is a slow rise upward throughout the day. Resistance will come in at the falling light green trendline, which it pointing to around 3000 today.

Support is the prior after-hours low around 2970. Later this week is where I think it will get interesting as we'll be getting closer to the all important FOMC meeting on July 30th/31st where forecasters think a 25 base point cut is almost certain and 50 has high odds. I'm thinking the insiders will start positioning in front of this meeting as they already know the outcome and where the market is headed to afterwards.

Everything looks too rosy to me and since we are up near all time highs I think whatever they do or say will cause a move down in the market. My thoughts are that we'll either see a breakout to new all time highs again late this week going into the meeting, where it will then dump hard afterwards... or we'll start down into the meeting first. If down first then the meeting could be a bottom as the Fed's surprise with something viewed good by the market.

I'm not sure what that could be but maybe it's enough to produce another short lived rally to that 3050-3100 area everyone seems to be looking for? Either way a move is very likely to happen prior to the meeting, and I'm think this Thursday or Friday we'll see it. We are very overbought now so if it's a move up then I'd say it will be a blow off top and after the meeting we'll see a multi-week (or multi-month) drop to much lower prices. If it's a move down first then I'd say we'll see just a multi-week rally into August, maybe September for the final high for this year... and then a recession start that will last a few years.

I'm leaning more toward this scenario as a nice move down into the meeting would lure in enough bears I think for that final rally up to 3100 or wherever in the next 2 months. The pullback should still be a nice one though, like a 100 SPX points or more I'd think, and then up to 3100-3200 or so. But if the bulls take the wrong path here and rally up into the meeting to top out say in the 3050's or so then look out below as I'd then be looking for 500-1000 SPX points down in the coming weeks and months.

I give that scenario low odds as I really think we'll be in rally mode up into September and not top out here in July or early August and then start a recession afterwards. Markets don't top in July, sometimes in August, but September and October are more common. Anyway, that's my outlook for coming week or two, and again, I'm leaning toward a move down starting late this week and going into the meeting... then back up afterwards. Have a great day.