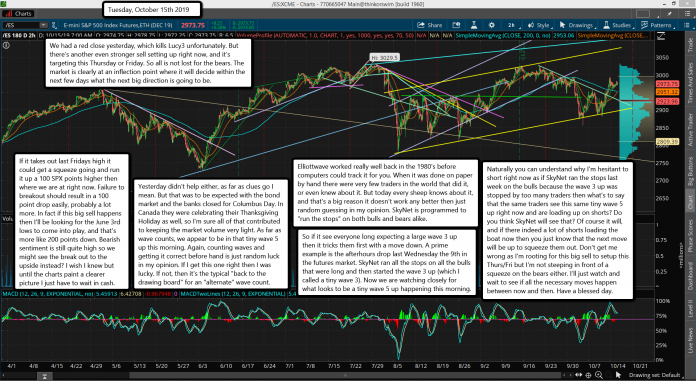 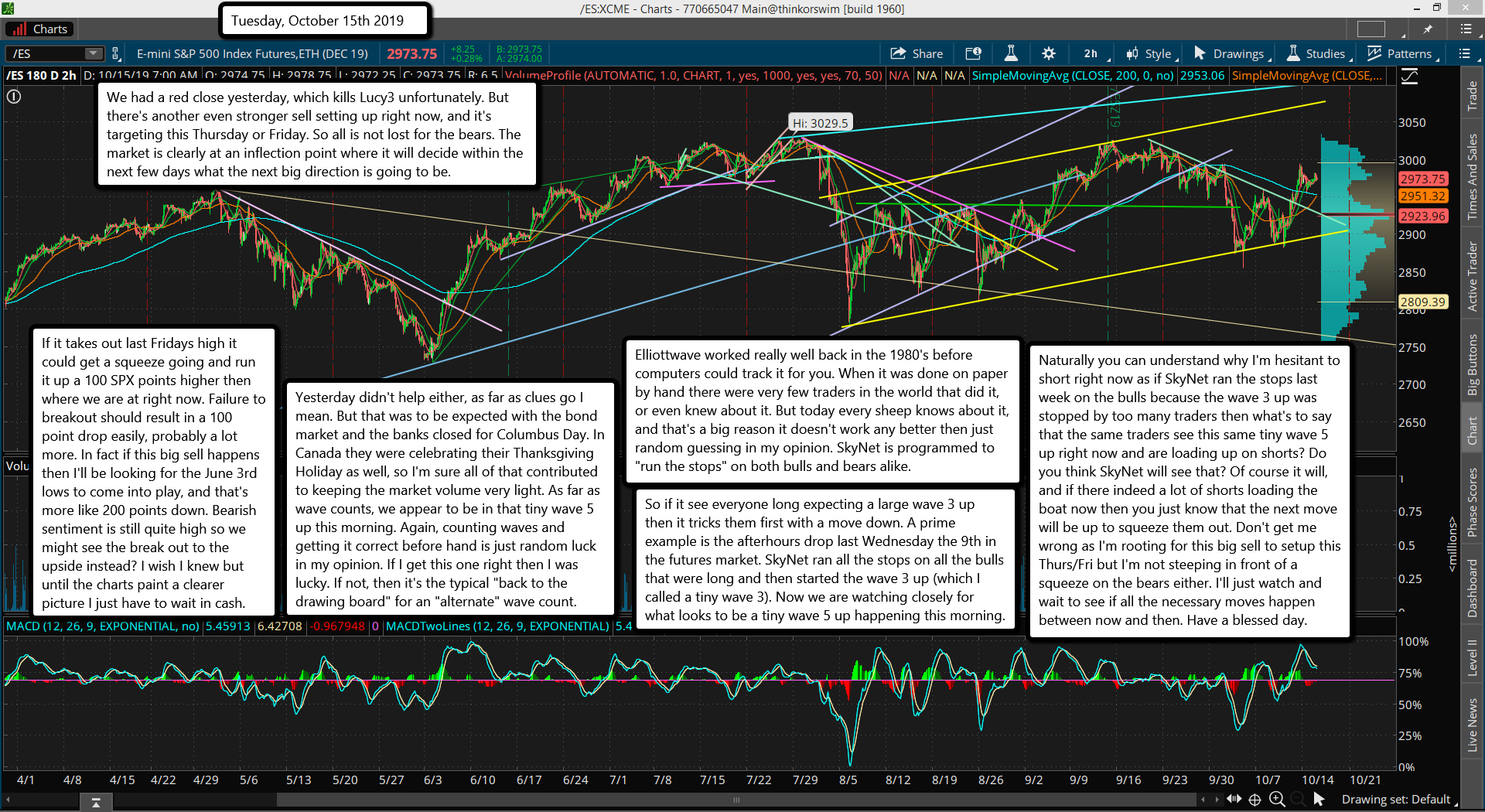 We had a red close yesterday, which kills Lucy3 unfortunately. But there's another even stronger sell setting up right now, and it's targeting this Thursday or Friday. So all is not lost for the bears. The market is clearly at an inflection point where it will decide within the next few days what the next big direction is going to be.

If it takes out last Fridays high it could get a squeeze going and run it up a 100 SPX points higher then where we are at right now. Failure to breakout should result in a 100 point drop easily, probably a lot more. In fact if this big sell happens then I'll be looking for the June 3rd lows to come into play, and that's more like 200 points down. Bearish sentiment is still quite high so we might see the break out to the upside instead? I wish I knew but until the charts paint a clearer picture I just have to wait in cash.

Yesterday didn't help either, as far as clues go I mean. But that was to be expected with the bond market and the banks closed for Columbus Day. In Canada they were celebrating their Thanksgiving Holiday as well, so I'm sure all of that contributed to keeping the market volume very light. As far as wave counts, we appear to be in that tiny wave 5 up this morning. Again, counting waves and getting it correct before hand is just random luck in my opinion. If I get this one right then I was lucky. If not, then it's the typical "back to the drawing board" for an "alternate" wave count.

Elliottwave worked really well back in the 1980's before computers could track it for you. When it was done on paper by hand there were very few traders in the world that did it, or even knew about it. But today every sheep knows about it, and that's a big reason it doesn't work any better then just random guessing in my opinion. SkyNet is programmed to "run the stops" on both bulls and bears alike.

So if it see everyone long expecting a large wave 3 up then it tricks them first with a move down. A prime example is the afterhours drop last Wednesday the 9th in the futures market. SkyNet ran all the stops on all the bulls that were long and then started the wave 3 up (which I called a tiny wave 3). Now we are watching closely for what looks to be a tiny wave 5 up happening this morning.

Naturally you can understand why I'm hesitant to short right now as if SkyNet ran the stops last week on the bulls because the wave 3 up was stopped by too many traders then what's to say that the same traders see this same tiny wave 5 up right now and are loading up on shorts? Do you think SkyNet will see that? Of course it will, and if there indeed a lot of shorts loading the boat now then you just know that the next move will be up to squeeze them out. Don't get me wrong as I'm rooting for this big sell to setup this Thurs/Fri but I'm not steeping in front of a squeeze on the bears either. I'll just watch and wait to see if all the necessary moves happen between now and then. Have a blessed day.