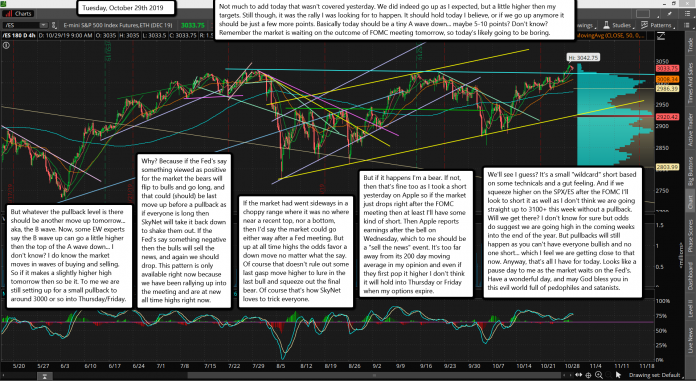 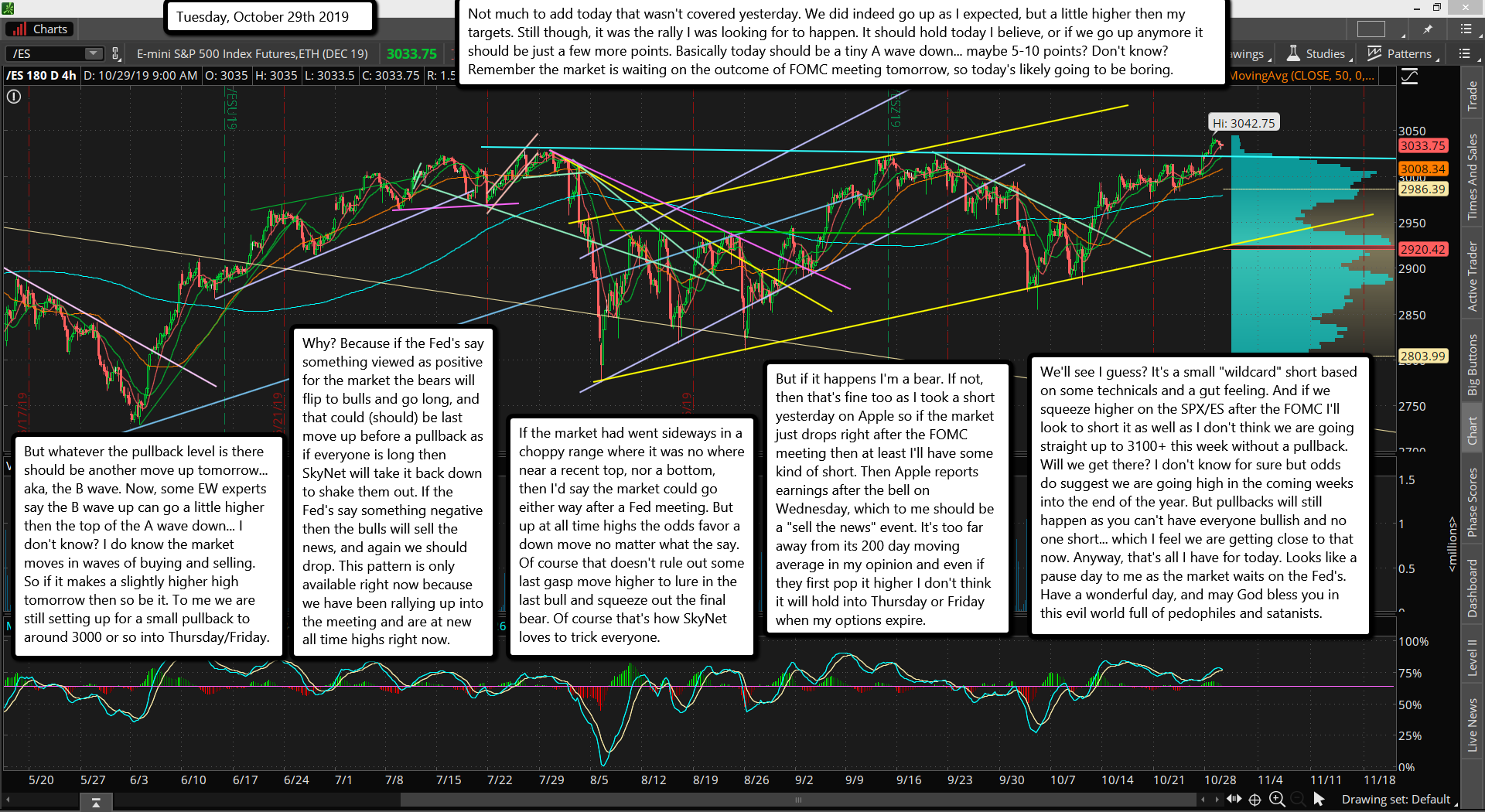 Not much to add today that wasn't covered yesterday. We did indeed go up as I expected, but a little higher then my targets. Still though, it was the rally I was looking for to happen. It should hold today I believe, or if we go up anymore it should be just a few more points. Basically today should be a tiny A wave down... maybe 5-10 points? Don't know? Remember the market is waiting on the outcome of FOMC meeting tomorrow, so today's likely going to be boring.

But whatever the pullback level is there should be another move up tomorrow... aka, the B wave. Now, some EW experts say the B wave up can go a little higher then the top of the A wave down... I don't know? I do know the market moves in waves of buying and selling. So if it makes a slightly higher high tomorrow then so be it. To me we are still setting up for a small pullback to around 3000 or so into Thursday/Friday.

Why? Because if the Fed's say something viewed as positive for the market the bears will flip to bulls and go long, and that could (should) be last move up before a pullback as if everyone is long then SkyNet will take it back down to shake them out. If the Fed's say something negative then the bulls will sell the news, and again we should drop. This pattern is only available right now because we have been rallying up into the meeting and are at new all time highs right now.

If the market had went sideways in a choppy range where it was no where near a recent top, nor a bottom, then I'd say the market could go either way after a Fed meeting. But up at all time highs the odds favor a down move no matter what the say. Of course that doesn't rule out some last gasp move higher to lure in the last bull and squeeze out the final bear. Of course that's how SkyNet loves to trick everyone.

But if it happens I'm a bear. If not, then that's fine too as I took a short yesterday on Apple so if the market just drops right after the FOMC meeting then at least I'll have some kind of short. Then Apple reports earnings after the bell on Wednesday, which to me should be a "sell the news" event. It's too far away from its 200 day moving average in my opinion and even if they first pop it higher I don't think it will hold into Thursday or Friday when my options expire.

We'll see I guess? It's a small "wildcard" short based on some technicals and a gut feeling. And if we squeeze higher on the SPX/ES after the FOMC I'll look to short it as well as I don't think we are going straight up to 3100+ this week without a pullback. Will we get there? I don't know for sure but odds do suggest we are going high in the coming weeks into the end of the year. But pullbacks will still happen as you can't have everyone bullish and no one short... which I feel we are getting close to that now. Anyway, that's all I have for today. Looks like a pause day to me as the market waits on the Fed's. Have a wonderful day, and may God bless you in this evil world full of pedophiles and satanists.