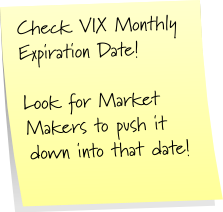 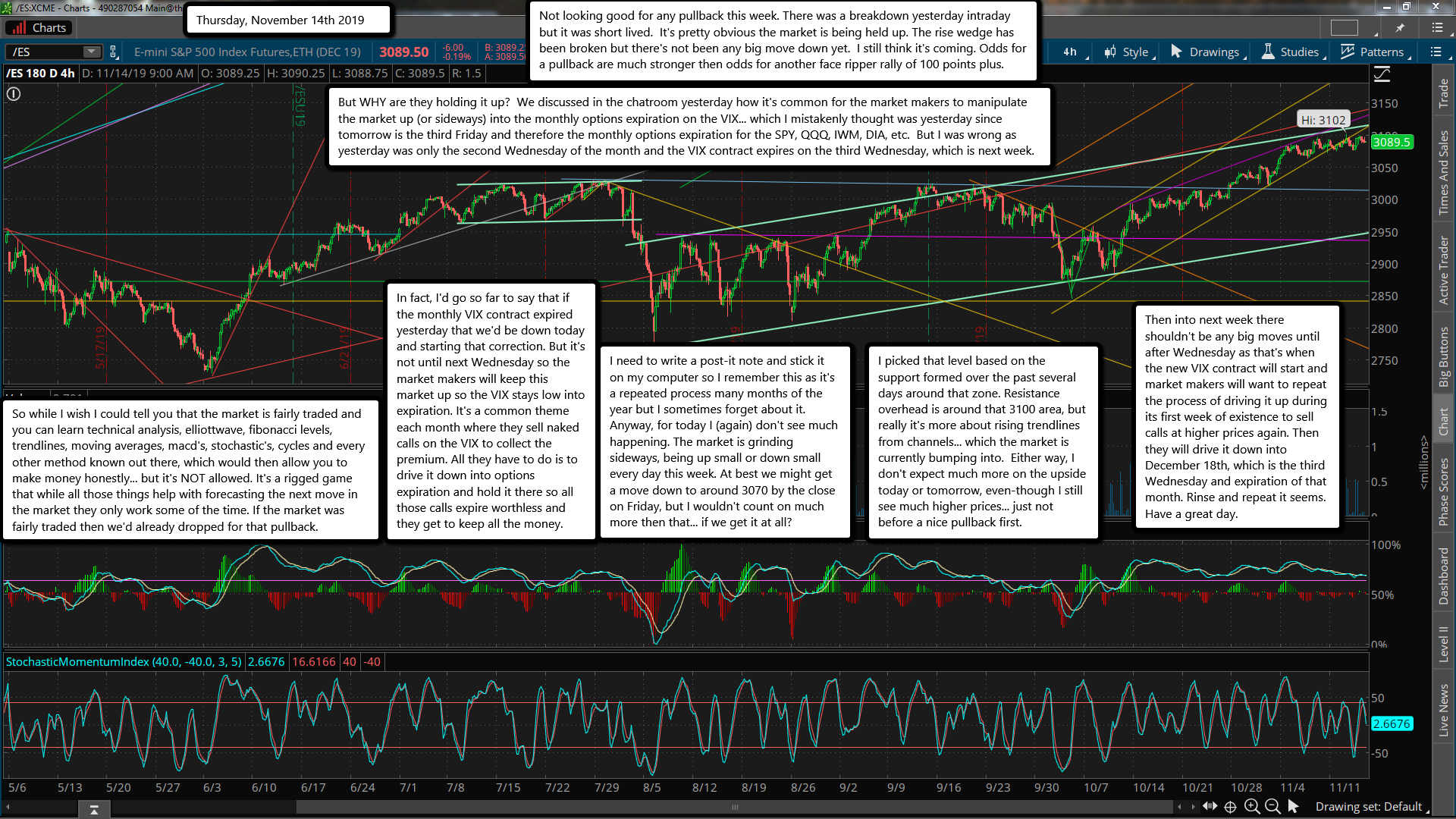 Not looking good for any pullback this week. There was a breakdown yesterday intraday but it was short lived.  It's pretty obvious the market is being held up. The rise wedge has been broken but there's not been any big move down yet.  I still think it's coming. Odds for a pullback are much stronger then odds for another face ripper rally of 100 points plus.

But WHY are they holding it up?  We discussed in the chatroom yesterday how it's common for the market makers to manipulate the market up (or sideways) into the monthly options expiration on the VIX... which I mistakenly thought was yesterday since tomorrow is the third Friday and therefore the monthly options expiration for the SPY, QQQ, IWM, DIA, etc.  But I was wrong as yesterday was only the second Wednesday of the month and the VIX contract expires on the third Wednesday, which is next week.

So while I wish I could tell you that the market is fairly traded and you can learn technical analysis, elliottwave, fibonacci levels, trendlines, moving averages, macd's, stochastic's, cycles and every other method known out there, which would then allow you to make money honestly... but it's NOT allowed. It's a rigged game that while all those things help with forecasting the next move in the market they only work some of the time. If the market was fairly traded then we'd already dropped for that pullback.

In fact, I'd go so far to say that if the monthly VIX contract expired yesterday that we'd be down today and starting that correction. But it's not until next Wednesday so the market makers will keep this market up so the VIX stays low into expiration. It's a common theme each month where they sell naked calls on the VIX to collect the premium. All they have to do is to drive it down into options expiration and hold it there so all those calls expire worthless and they get to keep all the money.

I need to write a post-it note and stick it on my computer so I remember this as it's a repeated process many months of the year but I sometimes forget about it. Anyway, for today I (again) don't see much happening. The market is grinding sideways, being up small or down small every day this week. At best we might get a move down to around 3070 by the close on Friday, but I wouldn't count on much more then that... if we get it at all?

I picked that level based on the support formed over the past several days around that zone. Resistance overhead is around that 3100 area, but really it's more about rising trendlines from channels... which the market is currently bumping into.  Either way, I don't expect much more on the upside today or tomorrow, even-though I still see much higher prices... just not before a nice pullback first.

Then into next week there shouldn't be any big moves until after Wednesday as that's when the new VIX contract will start and market makers will want to repeat the process of driving it up during its first week of existence to sell calls at higher prices again. Then they will drive it down into December 18th, which is the third Wednesday and expiration of that month. Rinse and repeat it seems. Have a great day.