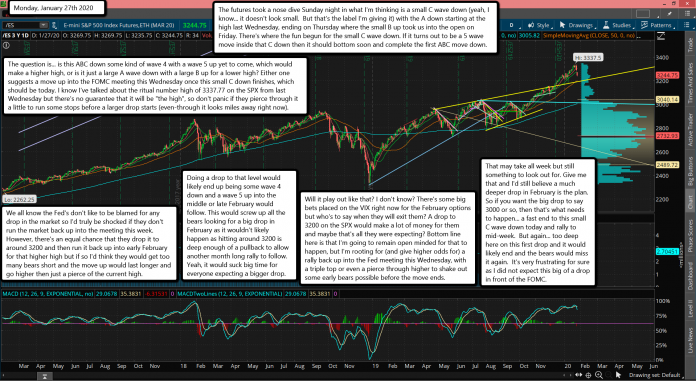 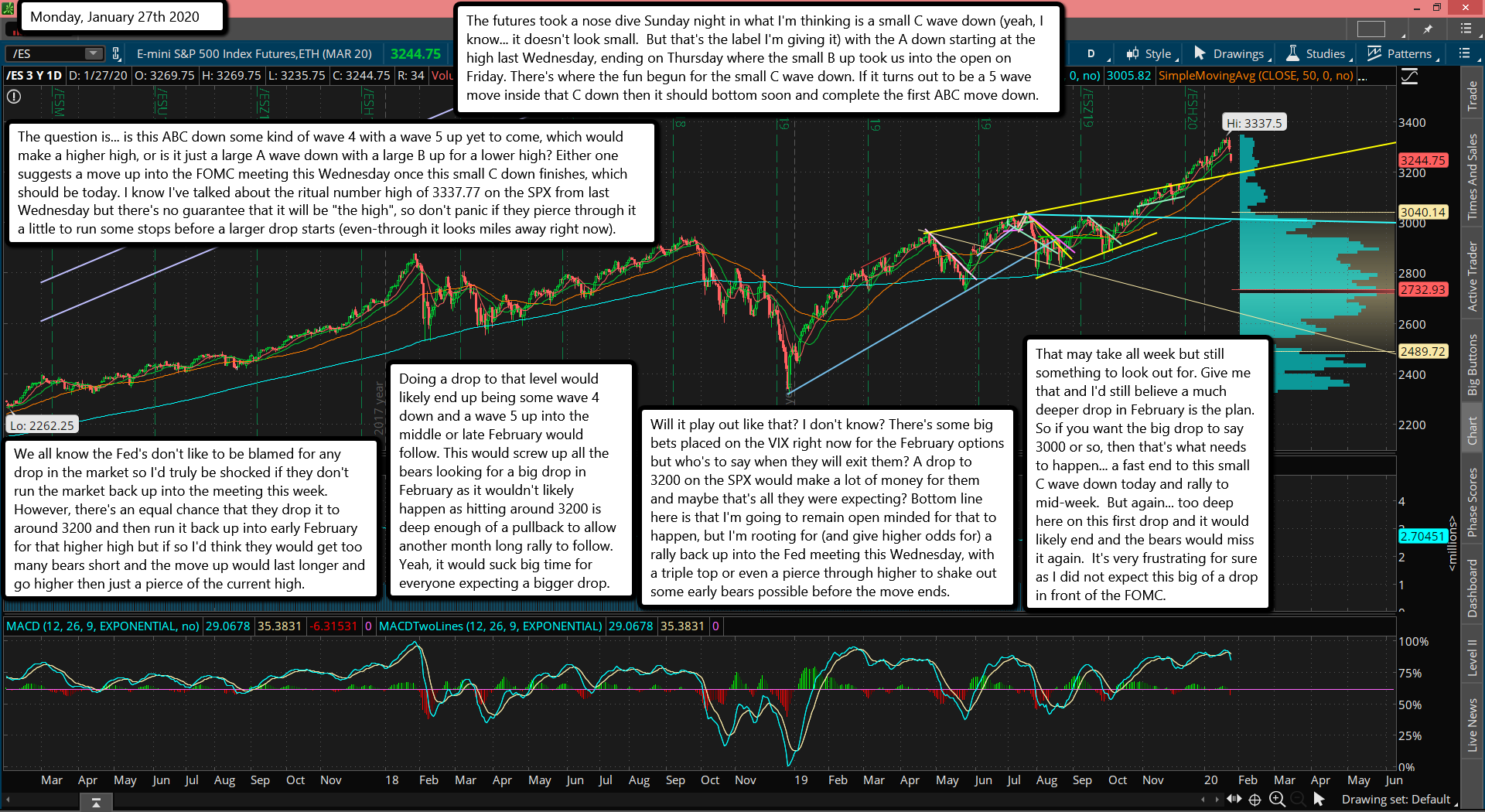 The futures took a nose dive Sunday night in what I'm thinking is a small C wave down (yeah, I know... it doesn't look small.  But that's the label I'm giving it) with the A down starting at the high last Wednesday, ending on Thursday where the small B up took us into the open on Friday. There's where the fun begun for the small C wave down. If it turns out to be a 5 wave move inside that C down then it should bottom soon and complete the first ABC move down.

The question is... is this ABC down some kind of wave 4 with a wave 5 up yet to come, which would make a higher high, or is it just a large A wave down with a large B up for a lower high? Either one suggests a move up into the FOMC meeting this Wednesday once this small C down finishes, which should be today. I know I've talked about the ritual number high of 3337.77 on the SPX from last Wednesday but there's no guarantee that it will be "the high", so don't panic if they pierce through it a little to run some stops before a larger drop starts (even-through it looks miles away right now).

We all know the Fed's don't like to be blamed for any drop in the market so I'd truly be shocked if they don't run the market back up into the meeting this week. However, there's an equal chance that they drop it to around 3200 and then run it back up into early February for that higher high but if so I'd think they would get too many bears short and the move up would last longer and go higher then just a pierce of the current high.

Doing a drop to that level would likely end up being some wave 4 down and a wave 5 up into the middle or late February would follow. This would screw up all the bears looking for a big drop in February as it wouldn't likely happen as hitting around 3200 is deep enough of a pullback to allow another month long rally to follow. Yeah, it would suck big time for everyone expecting a bigger drop.

Will it play out like that? I don't know? There's some big bets placed on the VIX right now for the February options but who's to say when they will exit them? A drop to 3200 on the SPX would make a lot of money for them and maybe that's all they were expecting? Bottom line here is that I'm going to remain open minded for that to happen, but I'm rooting for (and give higher odds for) a rally back up into the Fed meeting this Wednesday, with a triple top or even a pierce through higher to shake out some early bears possible before the move ends.

That may take all week but still something to look out for. Give me that and I'd still believe a much deeper drop in February is the plan. So if you want the big drop to say 3000 or so, then that's what needs to happen... a fast end to this small C wave down today and rally to mid-week.  But again... too deep here on this first drop and it would likely end and the bears would miss it again.  It's very frustrating for sure as I did not expect this big of a drop in front of the FOMC.