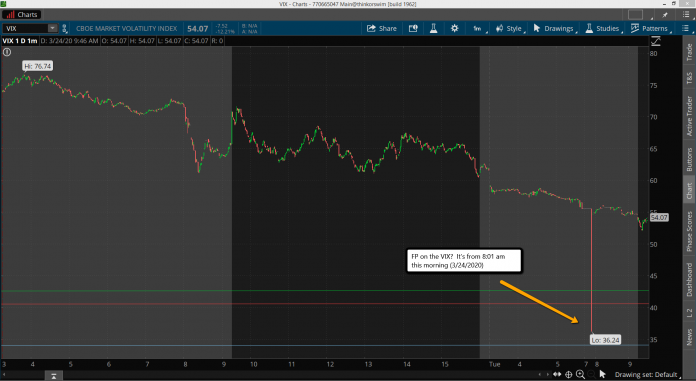 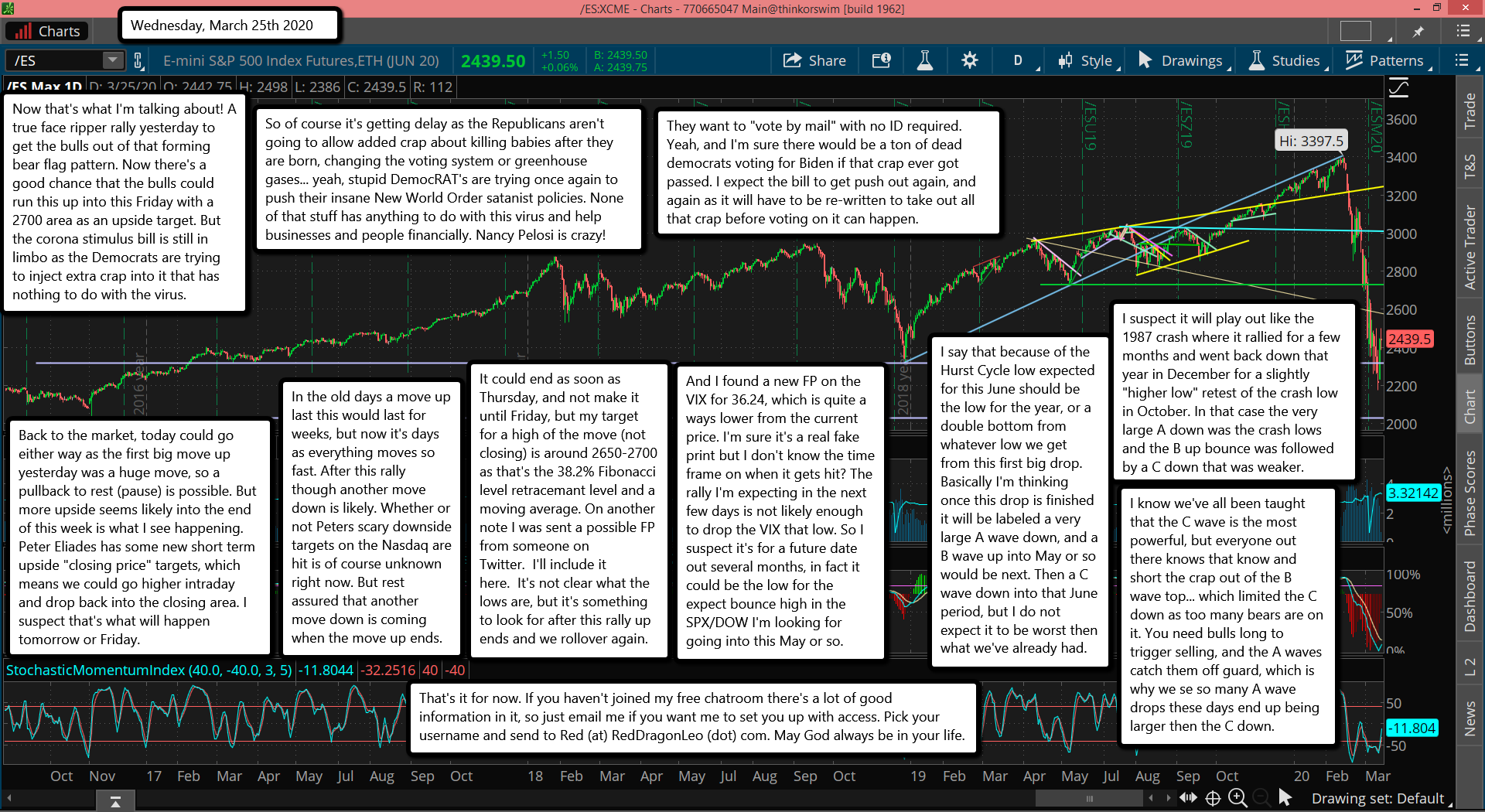 Now that's what I'm talking about! A true face ripper rally yesterday to get the bulls out of that forming bear flag pattern. Now there's a good chance that the bulls could run this up into this Friday with a 2700 area as an upside target. But the corona stimulus bill is still in limbo as the Democrats are trying to inject extra crap into it that has nothing to do with the virus.

So of course it's getting delay as the Republicans aren't going to allow added crap about killing babies after they are born, changing the voting system or greenhouse gases... yeah, stupid DemocRAT's are trying once again to push their insane New World Order satanist policies. None of that stuff has anything to do with this virus and help businesses and people financially. Nancy Pelosi is crazy!

They want to "vote by mail" with no ID required. Yeah, and I'm sure there would be a ton of dead democrats voting for Biden if that crap ever got passed. I expect the bill to get push out again, and again as it will have to be re-written to take out all that crap before voting on it can happen. It's all talked about in this video:

Back to the market, today could go either way as the first big move up yesterday was a huge move, so a pullback to rest (pause) is possible. But more upside seems likely into the end of this week is what I see happening. Peter Eliades has some new short term upside "closing price" targets, which means we could go higher intraday and drop back into the closing area. I suspect that's what will happen tomorrow or Friday.

In the old days a move up last this would last for weeks, but now it's days as everything moves so fast. After this rally though another move down is likely. Whether or not Peters scary downside targets on the Nasdaq are hit is of course unknown right now. But rest assured that another move down is coming when the move up ends.

It could end as soon as Thursday, and not make it until Friday, but my target for a high of the move (not closing) is around 2650-2700 as that's the 38.2% Fibonacci level retracemant level and a moving average. On another note I was sent a possible FP from someone on Twitter.  I'll include it here.  It's not clear what the lows are, but it's something to look for after this rally up ends and we rollover again.

And I found a new FP on the VIX for 36.24, which is quite a ways lower from the current price. I'm sure it's a real fake print but I don't know the time frame on when it gets hit? The rally I'm expecting in the next few days is not likely enough to drop the VIX that low. So I suspect it's for a future date out several months, in fact it could be the low for the expect bounce high in the SPX/DOW I'm looking for going into this May or so.

I say that because of the Hurst Cycle low expected for this June should be the low for the year, or a double bottom from whatever low we get from this first big drop. Basically I'm thinking once this drop is finished it will be labeled a very large A wave down, and a B wave up into May or so would be next. Then a C wave down into that June period, but I do not expect it to be worst then what we've already had.

I suspect it will play out like the 1987 crash where it rallied for a few months and went back down that year in December for a slightly "higher low" retest of the crash low in October. In that case the very large A down was the crash lows and the B up bounce was followed by a C down that was weaker.

I know we've all been taught that the C wave is the most powerful, but everyone out there knows that know and short the crap out of the B wave top... which limited the C down as too many bears are on it. You need bulls long to trigger selling, and the A waves catch them off guard, which is why we se so many A wave drops these days end up being larger then the C down.

That's it for now. If you haven't joined my free chatroom there's a lot of good information in it, so just email me if you want me to set you up with access. Pick your username and send to Red (at) RedDragonLeo (dot) com. May God always be in your life.