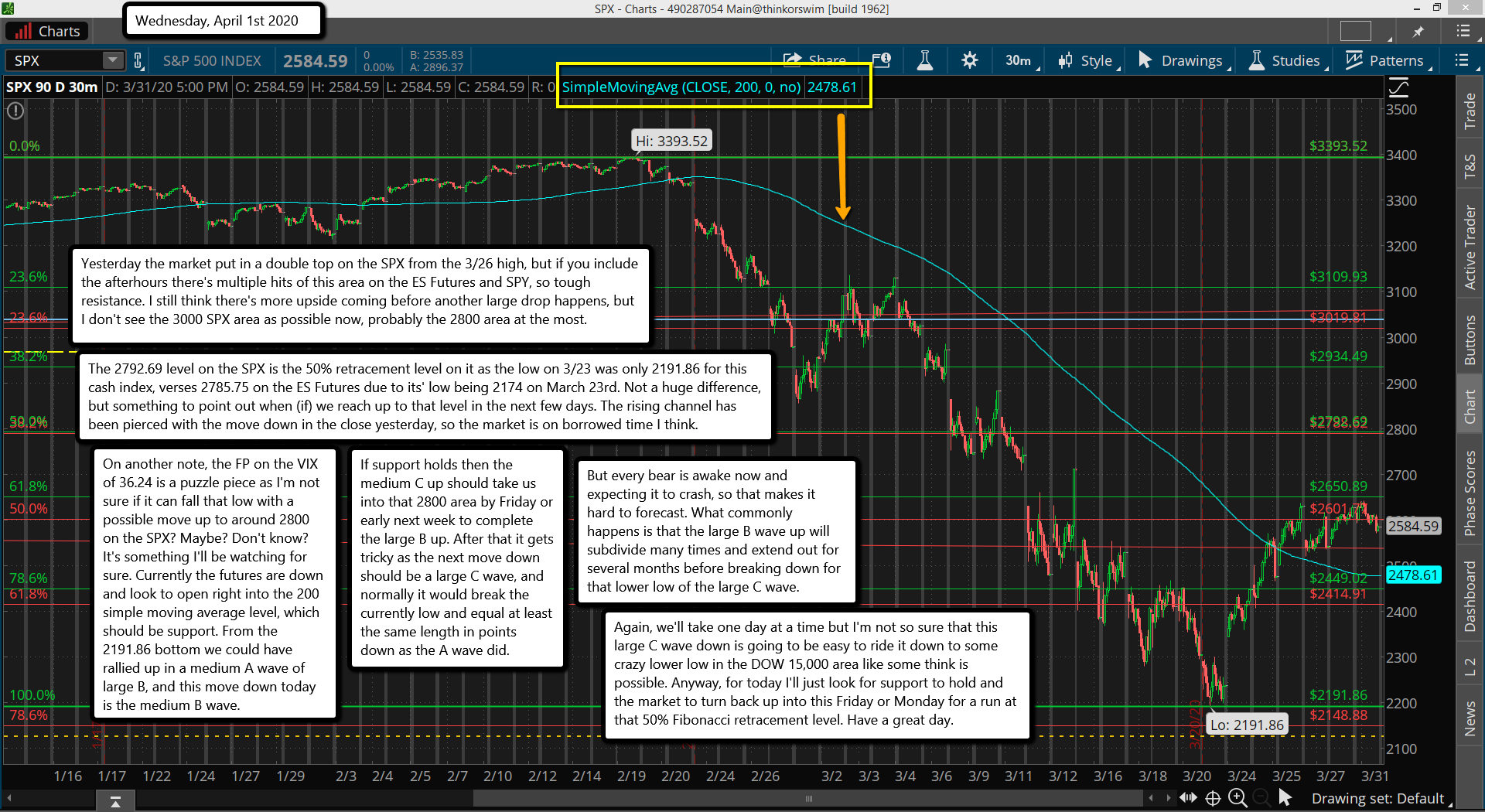 Yesterday the market put in a double top on the SPX from the 3/26 high, but if you include the afterhours there's multiple hits of this area on the ES Futures and SPY, so tough resistance. I still think there's more upside coming before another large drop happens, but I don't see the 3000 SPX area as possible now, probably the 2800 area at the most.

The 2792.69 level on the SPX is the 50% retracement level on it as the low on 3/23 was only 2191.86 for this cash index, verses 2785.75 on the ES Futures due to its' low being 2174 on March 23rd. Not a huge difference, but something to point out when (if) we reach up to that level in the next few days. The rising channel has been pierced with the move down in the close yesterday, so the market is on borrowed time I think.

On another note, the FP on the VIX of 36.24 is a puzzle piece as I'm not sure if it can fall that low with a possible move up to around 2800 on the SPX? Maybe? Don't know? It's something I'll be watching for sure. Currently the futures are down and look to open right into the 200 simple moving average level, which should be support. From the 2191.86 bottom we could have rallied up in a medium A wave of large B, and this move down today is the medium B wave.

If support holds then the medium C up should take us into that 2800 area by Friday or early next week to complete the large B up. After that it gets tricky as the next move down should be a large C wave, and normally it would break the currently low and equal at least the same length in points down as the A wave did.

But every bear is awake now and expecting it to crash, so that makes it hard to forecast. What commonly happens is that the large B wave up will subdivide many times and extend out for several months before breaking down for that lower low of the large C wave.

Again, we'll take one day at a time but I'm not so sure that this large C wave down is going to be easy to ride it down to some crazy lower low in the DOW 15,000 area like some think is possible. Anyway, for today I'll just look for support to hold and the market to turn back up into this Friday or Monday for a run at that 50% Fibonacci retracement level. Have a great day.