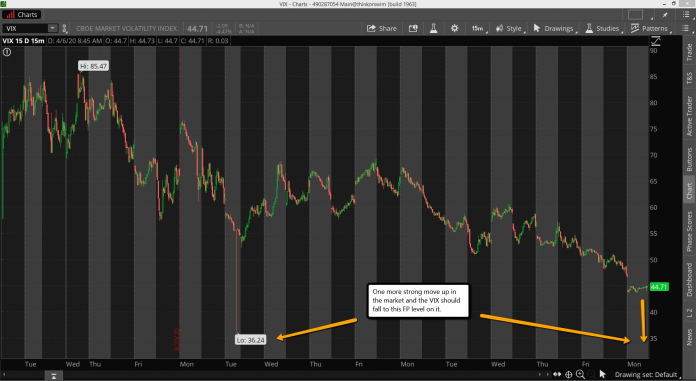 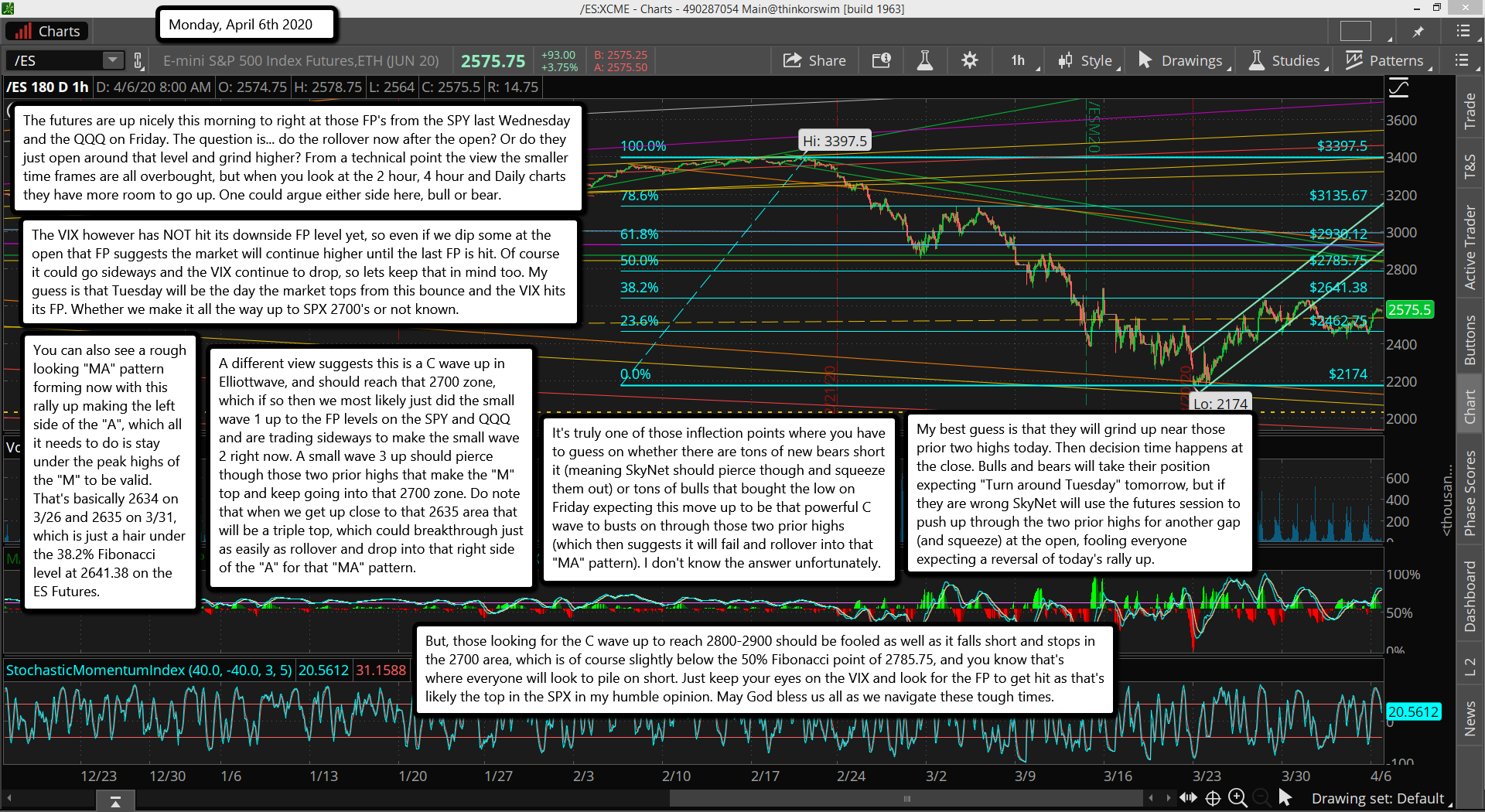 The futures are up nicely this morning to right at those FP's from the SPY last Wednesday and the QQQ on Friday. The question is... do the rollover now after the open? Or do they just open around that level and grind higher? From a technical point the view the smaller time frames are all overbought, but when you look at the 2 hour, 4 hour and Daily charts they have more room to go up. One could argue either side here, bull or bear.

The VIX however has NOT hit its downside FP level yet, so even if we dip some at the open that FP suggests the market will continue higher until the last FP is hit. Of course it could go sideways and the VIX continue to drop, so lets keep that in mind too. My guess is that Tuesday will be the day the market tops from this bounce and the VIX hits its FP. Whether we make it all the way up to SPX 2700's or not known.

A different view suggests this is a C wave up in Elliottwave, and should reach that 2700 zone, which if so then we most likely just did the small wave 1 up to the FP levels on the SPY and QQQ and are trading sideways to make the small wave 2 right now. A small wave 3 up should pierce though those two prior highs that make the "M" top and keep going into that 2700 zone. Do note that when we get up close to that 2635 area that will be a triple top, which could breakthrough just as easily as rollover and drop into that right side of the "A" for that "MA" pattern.

It's truly one of those inflection points where you have to guess on whether there are tons of new bears short it (meaning SkyNet should pierce though and squeeze them out) or tons of bulls that bought the low on Friday expecting this move up to be that powerful C wave to busts on through those two prior highs (which then suggests it will fail and rollover into that "MA" pattern). I don't know the answer unfortunately.

My best guess is that they will grind up near those prior two highs today. Then decision time happens at the close. Bulls and bears will take their position expecting "Turn around Tuesday" tomorrow, but if they are wrong SkyNet will use the futures session to push up through the two prior highs for another gap (and squeeze) at the open, fooling everyone expecting a reversal of today's rally up.

But, those looking for the C wave up to reach 2800-2900 should be fooled as well as it falls short and stops in the 2700 area, which is of course slightly below the 50% Fibonacci point of 2785.75, and you know that's where everyone will look to pile on short. Just keep your eyes on the VIX and look for the FP to get hit as that's likely the top in the SPX in my humble opinion. May God bless us all as we navigate these tough times.