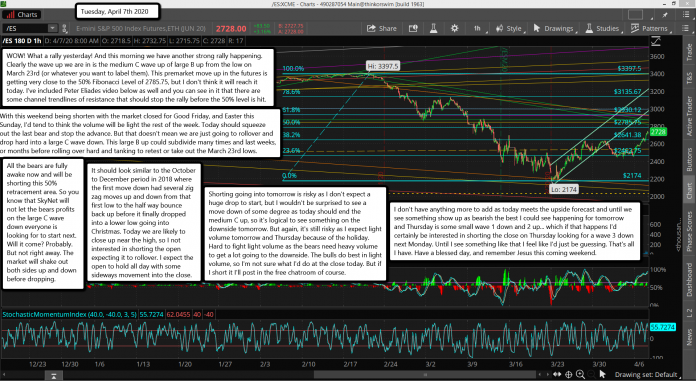 WOW! What a rally yesterday! And this morning we have another strong rally happening. Clearly the wave up we are in is the medium C wave up of large B up from the low on March 23rd (or whatever you want to label them). This premarket move up in the futures is getting very close to the 50% Fibonacci Level of 2785.75, but I don't think it will reach it today. I've included Peter Eliades video below as well and you can see in it that there are some channel trendlines of resistance that should stop the rally before the 50% level is hit.

With this weekend being shorten with the market closed for Good Friday, and Easter this Sunday, I'd tend to think the volume will be light the rest of the week. Today should squeeze out the last bear and stop the advance. But that doesn't mean we are just going to rollover and drop hard into a large C wave down. This large B up could subdivide many times and last weeks, or months before rolling over hard and tanking to retest or take out the March 23rd lows.

All the bears are fully awake now and will be shorting this 50% retracement area. So you know that SkyNet will not let the bears profits on the large C wave down everyone is looking for to start next. Will it come? Probably. But not right away. The market will shake out both sides up and down before dropping.

It should look similar to the October to December period in 2018 where the first move down had several zig zag moves up and down from that first low to the half way bounce back up before it finally dropped into a lower low going into Christmas. Today we are likely to close up near the high, so I not interested in shorting the open expecting it to rollover. I expect the open to hold all day with some sideways movement into the close.

Shorting going into tomorrow is risky as I don't expect a huge drop to start, but I wouldn't be surprised to see a move down of some degree as today should end the medium C up, so it's logical to see something on the downside tomorrow. But again, it's still risky as I expect light volume tomorrow and Thursday because of the holiday. Hard to fight light volume as the bears need heavy volume to get a lot going to the downside. The bulls do best in light volume, so I'm not sure what I'd do at the close today. But if I short it I'll post in the free chatroom of course.

I don't have anything more to add as today meets the upside forecast and until we see something show up as bearish the best I could see happening for tomorrow and Thursday is some small wave 1 down and 2 up... which if that happens I'd certainly be interested in shorting the close on Thursday looking for a wave 3 down next Monday. Until I see something like that I feel like I'd just be guessing. That's all I have. Have a blessed day, and remember Jesus this coming weekend.