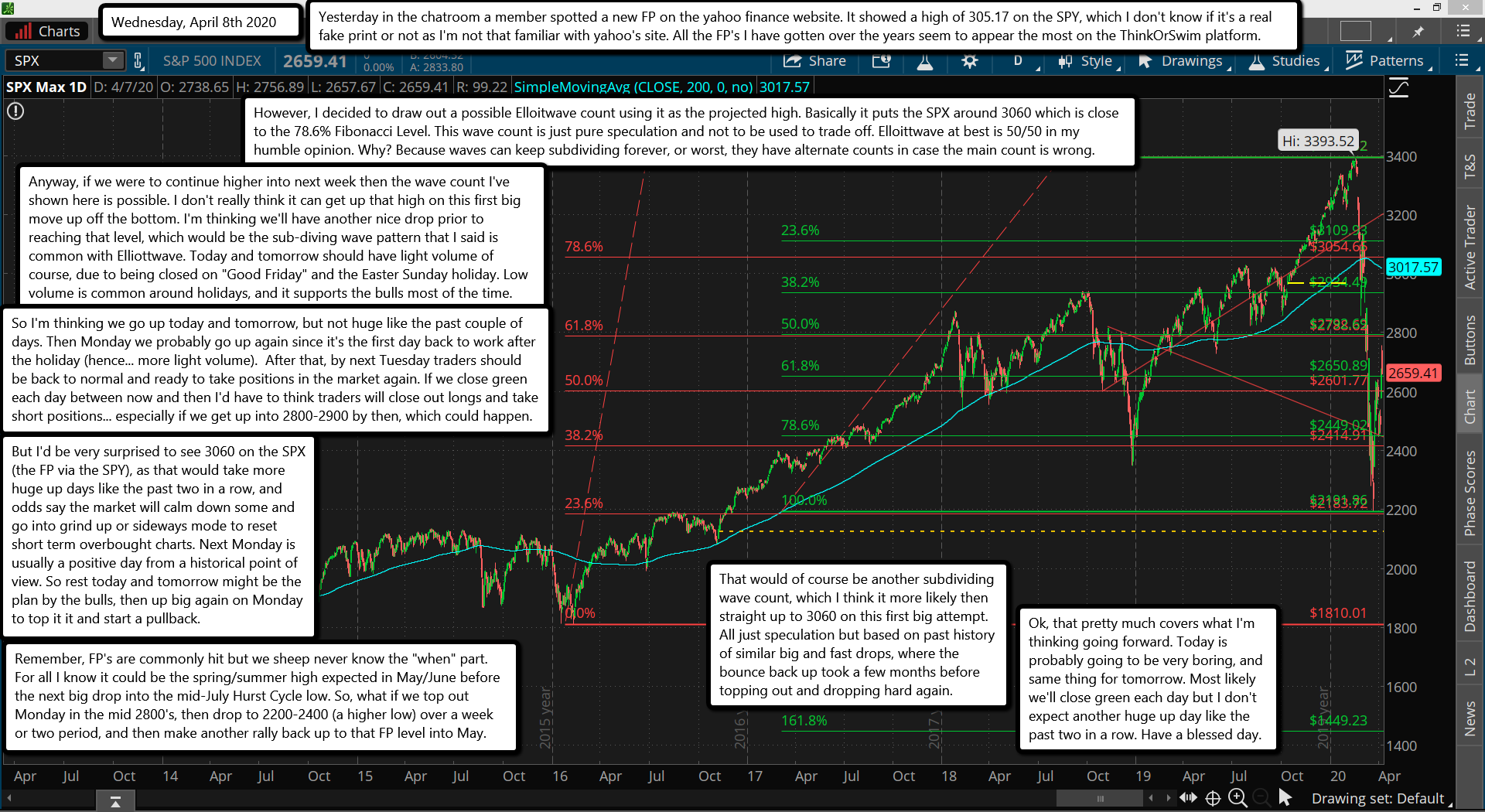 Yesterday in the chatroom a member spotted a new FP on the yahoo finance website. It showed a high of 305.17 on the SPY, which I don't know if it's a real fake print or not as I'm not that familiar with yahoo's site. All the FP's I have gotten over the years seem to appear the most on the ThinkOrSwim platform.

However, I decided to draw out a possible Elloitwave count using it as the projected high. Basically it puts the SPX around 3060 which is close to the 78.6% Fibonacci Level. This wave count is just pure speculation and not to be used to trade off. Elloittwave at best is 50/50 in my humble opinion. Why? Because waves can keep subdividing forever, or worst, they have alternate counts in case the main count is wrong.

Anyway, if we were to continue higher into next week then the wave count I've shown here is possible. I don't really think it can get up that high on this first big move up off the bottom. I'm thinking we'll have another nice drop prior to reaching that level, which would be the sub-diving wave pattern that I said is common with Elliottwave. Today and tomorrow should have light volume of course, due to being closed on "Good Friday" and the Easter Sunday holiday. Low volume is common around holidays, and it supports the bulls most of the time.

So I'm thinking we go up today and tomorrow, but not huge like the past couple of days. Then Monday we probably go up again since it's the first day back to work after the holiday (hence... more light volume).  After that, by next Tuesday traders should be back to normal and ready to take positions in the market again. If we close green each day between now and then I'd have to think traders will close out longs and take short positions... especially if we get up into 2800-2900 by then, which could happen.

But I'd be very surprised to see 3060 on the SPX (the FP via the SPY), as that would take more huge up days like the past two in a row, and odds say the market will calm down some and go into grind up or sideways mode to reset short term overbought charts. Next Monday is usually a positive day from a historical point of view. So rest today and tomorrow might be the plan by the bulls, then up big again on Monday to top it it and start a pullback.

Remember, FP's are commonly hit but we sheep never know the "when" part. For all I know it could be the spring/summer high expected in May/June before the next big drop into the mid-July Hurst Cycle low. So, what if we top out Monday in the mid 2800's, then drop to 2200-2400 (a higher low) over a week or two period, and then make another rally back up to that FP level into May.

That would of course be another subdividing wave count, which I think it more likely then straight up to 3060 on this first big attempt. All just speculation but based on past history of similar big and fast drops, where the bounce back up took a few months before topping out and dropping hard again.

Ok, that pretty much covers what I'm thinking going forward. Today is probably going to be very boring, and same thing for tomorrow. Most likely we'll close green each day but I don't expect another huge up day like the past two in a row. Have a blessed day.

P.S.  My thinking of a top by next Monday in the 2800's could line up with Peter's upside closing projection levels as well, depending on which offset time period you look at?