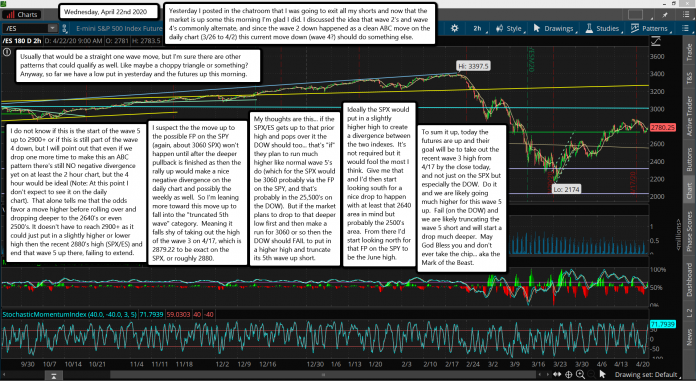 Yesterday I posted in the chatroom that I was going to exit all my shorts and now that the market is up some this morning I'm glad I did. I discussed the idea that wave 2's and wave 4's commonly alternate, and since the wave 2 down happened as a clean ABC move on the daily chart (3/26 to 4/2) this current move down (wave 4?) should do something else.

Usually that would be a straight one wave move, but I'm sure there are other patterns that could qualify as well. Like maybe a choppy triangle or something? Anyway, so far we have a low put in yesterday and the futures up this morning.

I do not know if this is the start of the wave 5 up to 2900+ or if this is still part of the wave 4 down, but I will point out that even if we drop one more time to make this an ABC pattern there's still NO negative divergence yet on at least the 2 hour chart, but the 4 hour would be ideal (Note: At this point I don't expect to see it on the daily chart).  That alone tells me that the odds favor a move higher before rolling over and dropping deeper to the 2640's or even 2500's. It doesn't have to reach 2900+ as it could just put in a slightly higher or lower high then the recent 2880's high (SPX/ES) and end that wave 5 up there, failing to extend.

I suspect the the move up to the possible FP on the SPY (again, about 3060 SPX) won't happen until after the deeper pullback is finished as then the rally up would make a nice negative divergence on the daily chart and possibly the weekly as well.  So I'm leaning more toward this move up to fall into the "truncated 5th wave" category.  Meaning it falls shy of taking out the high of the wave 3 on 4/17, which is 2879.22 to be exact on the SPX, or roughly 2880.

My thoughts are this... if the SPX/ES gets up to that prior high and pops over it the DOW should too... that's "if" they plan to run much higher like normal wave 5's do (which for the SPX would be 3060 probably via the FP on the SPY, and that's probably in the 25,500's on the DOW).  But if the market plans to drop to that deeper low first and then make a run for 3060 or so then the DOW should FAIL to put in a higher high and truncate its 5th wave up short.

Ideally the SPX would put in a slightly higher high to create a divergence between the two indexes.  It's not required but it would fool the most I think.  Give me that and I'd then start looking south for a nice drop to happen with at least that 2640 area in mind but probably the 2500's area.  From there I'd start looking north for that FP on the SPY to be the June high.

To sum it up, today the futures are up and their goal will be to take out the recent wave 3 high from 4/17 by the close today, and not just on the SPX but especially the DOW.  Do it and we are likely going much higher for this wave 5 up.  Fail (on the DOW) and we are likely truncating the wave 5 short and will start a drop much deeper.  May God Bless you and don't ever take the chip... aka the Mark of the Beast.