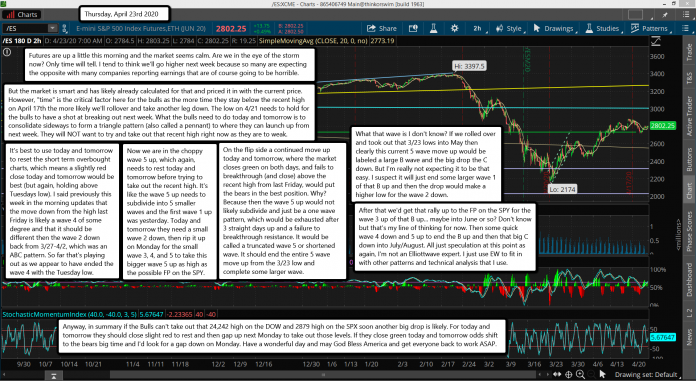 Futures are up a little this morning and the market seems calm. Are we in the eye of the storm now? Only time will tell. I tend to think we'll go higher next week because so many are expecting the opposite with many companies reporting earnings that are of course going to be horrible.

But the market is smart and has likely already calculated for that and priced it in with the current price. However, "time" is the critical factor here for the bulls as the more time they stay below the recent high on April 17th the more likely we'll rollover and take another leg down. The low on 4/21 needs to hold for the bulls to have a shot at breaking out next week. What the bulls need to do today and tomorrow is to consolidate sideways to form a triangle pattern (also called a pennant) to where they can launch up from next week. They will NOT want to try and take out that recent high right now as they are to weak.

It's best to use today and tomorrow to reset the short term overbought charts, which means a slightly red close today and tomorrow would be best (but again, holding above Tuesdays low). I said previously this week in the morning updates that the move down from the high last Friday is likely a wave 4 of some degree and that it should be different then the wave 2 down back from 3/27-4/2, which was an ABC pattern. So far that's playing out as we appear to have ended the wave 4 with the Tuesday low.

Now we are in the choppy wave 5 up, which again, needs to rest today and tomorrow before trying to take out the recent high. It's like the wave 5 up needs to subdivide into 5 smaller waves and the first wave 1 up was yesterday. Today and tomorrow they need a small wave 2 down, then rip it up on Monday for the small wave 3, 4, and 5 to take this bigger wave 5 up as high as the possible FP on the SPY.

On the flip side a continued move up today and tomorrow, where the market closes green on both days, and fails to breakthrough (and close) above the recent high from last Friday, would put the bears in the best position. Why? Because then the wave 5 up would not likely subdivide and just be a one wave pattern, which would be exhausted after 3 straight days up and a failure to breakthrough resistance. It would be called a truncated wave 5 or shortened wave. It should end the entire 5 wave move up from the 3/23 low and complete some larger wave.

What that wave is I don't know? If we rolled over and took out that 3/23 lows into May then clearly this current 5 wave move up would be labeled a large B wave and the big drop the C down. But I'm really not expecting it to be that easy. I suspect it will just end some larger wave 1 of that B up and then the drop would make a higher low for the wave 2 down.

After that we'd get that rally up to the FP on the SPY for the wave 3 up of that B up... maybe into June or so? Don't know but that's my line of thinking for now. Then some quick wave 4 down and 5 up to end the B up and then that big C down into July/August. All just speculation at this point as again, I'm not an Elliottwave expert. I just use EW to fit in with other patterns and technical analysis that I use.

Anyway, in summary if the Bulls can't take out that 24,242 high on the DOW and 2879 high on the SPX soon another big drop is likely. For today and tomorrow they should close slight red to rest and then gap up next Monday to take out those levels. If they close green today and tomorrow odds shift to the bears big time and I'd look for a gap down on Monday. Have a wonderful day and may God Bless America and get everyone back to work ASAP.