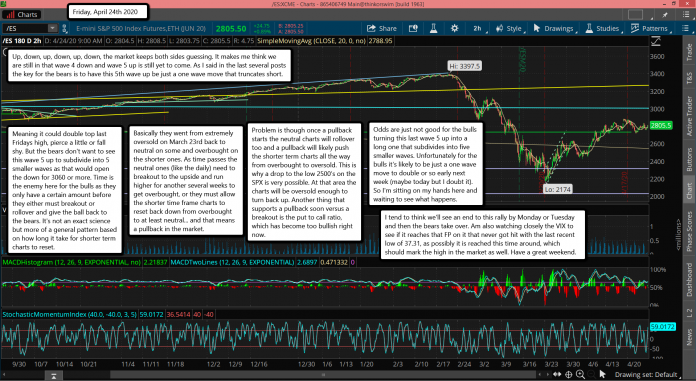 Up, down, up, down, up, down, the market keeps both sides guessing. It makes me think we are still in that wave 4 down and wave 5 up is still yet to come. As I said in the last several posts the key for the bears is to have this 5th wave up be just a one wave move that truncates short.

Meaning it could double top last Fridays high, pierce a little or fall shy. But the bears don't want to see this wave 5 up to subdivide into 5 smaller waves as that would open the down for 3060 or more. Time is the enemy here for the bulls as they only have a certain amount before they either must breakout or rollover and give the ball back to the bears. It's not an exact science but more of a general pattern based on how long it take for shorter term charts to reset.

Basically they went from extremely oversold on March 23rd back to neutral on some and overbought on the shorter ones. As time passes the neutral ones (like the daily) need to breakout to the upside and run higher for another several weeks to get overbought, or they must allow the shorter time frame charts to reset back down from overbought to at least neutral... and that means a pullback in the market.

Problem is though once a pullback starts the neutral charts will rollover too and a pullback will likely push the shorter term charts all the way from overbought to oversold. This is why a drop to the low 2500's on the SPX is very possible. At that area the charts will be oversold enough to turn back up. Another thing that supports a pullback soon versus a breakout is the put to call ratio, which has become too bullish right now.

Odds are just not good for the bulls turning this last wave 5 up into a long one that subdivides into five smaller waves. Unfortunately for the bulls it's likely to be just a one wave move to double or so early next week (maybe today but I doubt it). So I'm sitting on my hands here and waiting to see what happens.

I tend to think we'll see an end to this rally by Monday or Tuesday and then the bears take over. Am also watching closely the VIX to see if it reaches that FP on it that never got hit with the last recent low of 37.31, as possibly it is reached this time around, which should mark the high in the market as well. Have a great weekend.