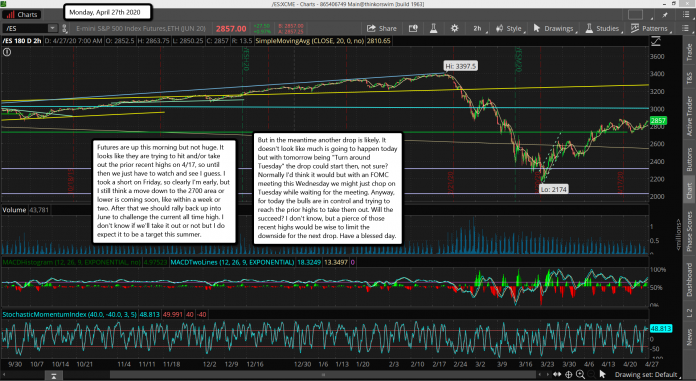 Futures are up this morning but not huge. It looks like they are trying to hit and/or take out the prior recent highs on 4/17, so until then we just have to watch and see I guess. I took a short on Friday, so clearly I'm early, but I still think a move down to the 2700 area or lower is coming soon, like within a week or two. After that we should rally back up into June to challenge the current all time high. I don't know if we'll take it out or not but I do expect it to be a target this summer.

But in the meantime another drop is likely. It doesn't look like much is going to happen today but with tomorrow being "Turn around Tuesday" the drop could start then, not sure? Normally I'd think it would but with an FOMC meeting this Wednesday we might just chop on Tuesday while waiting for the meeting. Anyway, for today the bulls are in control and trying to reach the prior highs to take them out. Will the succeed? I don't know, but a pierce of those recent highs would be wise to limit the downside for the next drop. Have a blessed day.