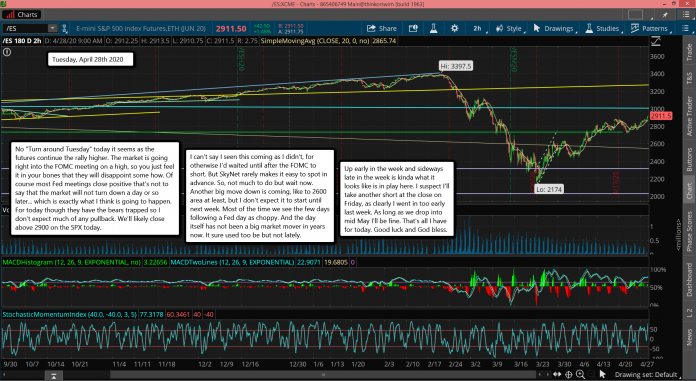 No "Turn around Tuesday" today it seems as the futures continue the rally higher. The market is going right into the FOMC meeting on a high, so you just feel it in your bones that they will disappoint some how. Of course most Fed meetings close positive that's not to say that the market will not turn down a day or so later... which is exactly what I think is going to happen. For today though they have the bears trapped so I don't expect much of any pullback. We'll likely close above 2900 on the SPX today.

I can't say I seen this coming as I didn't, for otherwise I'd waited until after the FOMC to short. But SkyNet rarely makes it easy to spot in advance. So, not much to do but wait now. Another big move down is coming, like to 2600 area at least, but I don't expect it to start until next week. Most of the time we see the few days following a Fed day as choppy. And the day itself has not been a big market mover in years now. It sure used too be but not lately.

Up early in the week and sideways late in the week is kinda what it looks like is in play here. I suspect I'll take another short at the close on Friday, as clearly I went in too early last week. As long as we drop into mid May I'll be fine. That's all I have for today. Good luck and God bless.