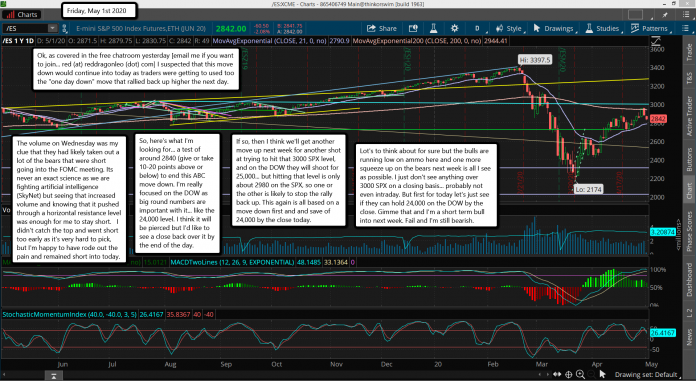 Ok, as covered in the free chatroom yesterday [email me if you want to join... red (at) reddragonleo (dot) com] I suspected that this move down would continue into today as traders were getting to used too the "one day down" move that rallied back up higher the next day.

The volume on Wednesday was my clue that they had likely taken out a lot of the bears that were short going into the FOMC meeting. Its never an exact science as we are fighting artificial intelligence (SkyNet) but seeing that increased volume and knowing that it pushed through a horizontal resistance level was enough for me to stay short.   I didn't catch the top and went short too early as it's very hard to pick, but I'm happy to have rode out the pain and remained short into today.

If so, then I think we'll get another move up next week for another shot at trying to hit that 3000 SPX level, and on the DOW they will shoot for 25,000... but hitting that level is only about 2980 on the SPX, so one or the other is likely to stop the rally back up. This again is all based on a move down first and and save of 24,000 by the close today.

Lot's to think about for sure but the bulls are running low on ammo here and one more squeeze up on the bears next week is all I see as possible. I just don't see anything over 3000 SPX on a closing basis... probably not even intraday. But first for today let's just see if they can hold 24,000 on the DOW by the close. Gimme that and I'm a short term bull into next week. Fail and I'm still bearish.