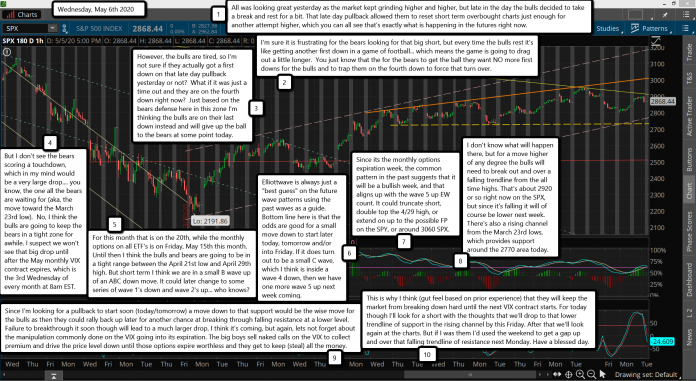 All was looking great yesterday as the market kept grinding higher and higher, but late in the day the bulls decided to take a break and rest for a bit. That late day pullback allowed them to reset short term overbought charts just enough for another attempt higher, which you can all see that's exactly what is happening in the futures right now.

I'm sure it is frustrating for the bears looking for that big short, but every time the bulls rest it's like getting another first down in a game of football... which means the game is going to drag out a little longer.  You just know that the for the bears to get the ball they want NO more first downs for the bulls and to trap them on the fourth down to force that turn over.

However, the bulls are tired, so I'm not sure if they actually got a first down on that late day pullback yesterday or not?  What if it was just a time out and they are on the fourth down right now?  Just based on the bears defense here in this zone I'm thinking the bulls are on their last down instead and will give up the ball to the bears at some point today.

But I don't see the bears scoring a touchdown, which in my mind would be a very large drop.... you know, the one all the bears are waiting for (aka, the move toward the March 23rd low).  No, I think the bulls are going to keep the bears in a tight zone for awhile. I suspect we won't see that big drop until after the May monthly VIX contract expires, which is the 3rd Wednesday of every month at 8am EST.

For this month that is on the 20th, while the monthly options on all ETF's is on Friday, May 15th this month. Until then I think the bulls and bears are going to be in a tight range between the April 21st low and April 29th high. But short term I think we are in a small B wave up of an ABC down move. It could later change to some series of wave 1's down and wave 2's up... who knows?

Elliottwave is always just a "best guess" on the future wave patterns using the past waves as a guide. Bottom line here is that the odds are good for a small move down to start later today, tomorrow and/or into Friday. If it does turn out to be a small C wave, which I think is inside a wave 4 down, then we have one more wave 5 up next week coming.

Since its the monthly options expiration week, the common pattern in the past suggests that it will be a bullish week, and that aligns up with the wave 5 up EW count. It could truncate short, double top the 4/29 high, or extend on up to the possible FP on the SPY, or around 3060 SPX.

I don't know what will happen there, but for a move higher of any degree the bulls will need to break out and over a falling trendline from the all time highs. That's about 2920 or so right now on the SPX, but since it's falling it will of course be lower next week. There's also a rising channel from the March 23rd lows, which provides support around the 2770 area today.

Since I'm looking for a pullback to start soon (today/tomorrow) a move down to that support would be the wise move for the bulls as then they could rally back up later for another chance at breaking through falling resistance at a lower level. Failure to breakthrough it soon though will lead to a much larger drop. I think it's coming, but again, lets not forget about the manipulation commonly done on the VIX going into its expiration. The big boys sell naked calls on the VIX to collect premium and drive the price level down until those options expire worthless and they get to keep (steal) all the money.

This is why I think (gut feel based on prior experience) that they will keep the market from breaking down hard until the next VIX contract starts. For today though I'll look for a short with the thoughts that we'll drop to that lower trendline of support in the rising channel by this Friday. After that we'll look again at the charts. But if I was them I'd used the weekend to get a gap up and over that falling trendline of resistance next Monday. Have a blessed day.