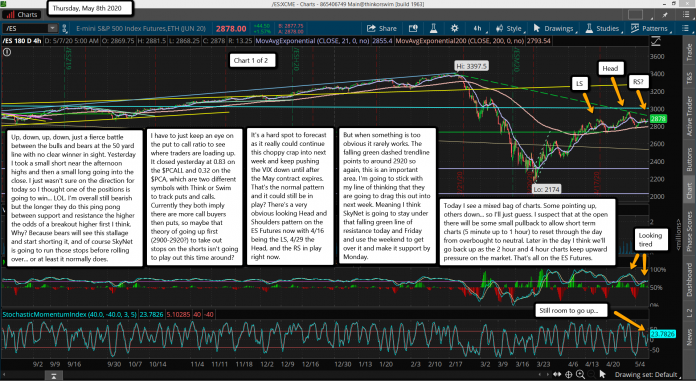 Up, down, up, down, just a fierce battle between the bulls and bears at the 50 yard line with no clear winner in sight. Yesterday I took a small short near the afternoon highs and then a small long going into the close. I just wasn't sure on the direction for today so I thought one of the positions is going to win... LOL. I'm overall still bearish but the longer they do this ping pong between support and resistance the higher the odds of a breakout higher first I think. Why? Because bears will see this stallage and start shorting it, and of course SkyNet is going to run those stops before rolling over... or at least it normally does.

I have to just keep an eye on the put to call ratio to see where traders are loading up. It closed yesterday at 0.83 on the $PCALL and 0.32 on the $PCA, which are two different symbols with Think or Swim to track puts and calls. Currently they both imply there are more call buyers then puts, so maybe that theory of going up first (2900-2920?) to take out stops on the shorts isn't going to play out this time around?

It's a hard spot to forecast as it really could continue this choppy crap into next week and keep pushing the VIX down until after the May contract expires. That's the normal pattern and it could still be in play? There's a very obvious looking Head and Shoulders pattern on the ES Futures now with 4/16 being the LS, 4/29 the Head, and the RS in play right now.

But when something is too obvious it rarely works. The falling green dashed trendline points to around 2920 so again, this is an important area. I'm going to stick with my line of thinking that they are going to drag this out into next week. Meaning I think SkyNet is going to stay under that falling green line of resistance today and Friday and use the weekend to get over it and make it support by Monday.

Today I see a mixed bag of charts. Some pointing up, others down... so I'll just guess. I suspect that at the open there will be some small pullback to allow short term charts (5 minute up to 1 hour) to reset through the day from overbought to neutral. Later in the day I think we'll go back up as the 2 hour and 4 hour charts keep upward pressure on the market. That's all on the ES Futures. 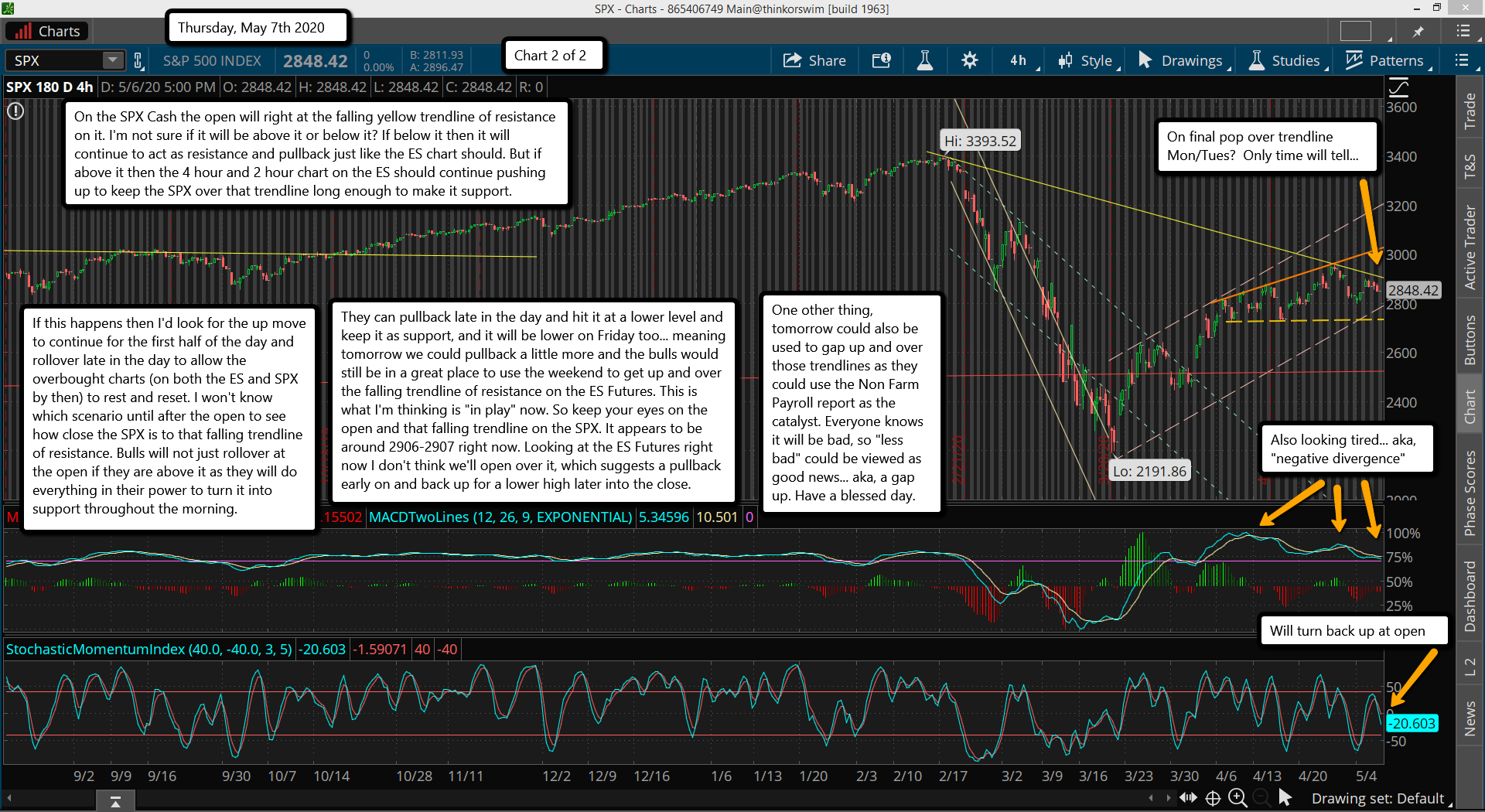 On the SPX Cash the open will right at the falling yellow trendline of resistance on it. I'm not sure if it will be above it or below it? If below it then it will continue to act as resistance and pullback just like the ES chart should. But if above it then the 4 hour and 2 hour chart on the ES should continue pushing up to keep the SPX over that trendline long enough to make it support.

If this happens then I'd look for the up move to continue for the first half of the day and rollover late in the day to allow the overbought charts (on both the ES and SPX by then) to rest and reset. I won't know which scenario until after the open to see how close the SPX is to that falling trendline of resistance. Bulls will not just rollover at the open if they are above it as they will do everything in their power to turn it into support throughout the morning.

They can pullback late in the day and hit it at a lower level and keep it as support, and it will be lower on Friday too... meaning tomorrow we could pullback a little more and the bulls would still be in a great place to use the weekend to get up and over the falling trendline of resistance on the ES Futures. This is what I'm thinking is "in play" now. So keep your eyes on the open and that falling trendline on the SPX. It appears to be around 2906-2907 right now. Looking at the ES Futures right now I don't think we'll open over it, which suggests a pullback early on and back up for a lower high later into the close.

One other thing, tomorrow could also be used to gap up and over those trendlines as they could use the Non Farm Payroll report as the catalyst. Everyone knows it will be bad, so "less bad" could be viewed as good news... aka, a gap up. Have a blessed day.