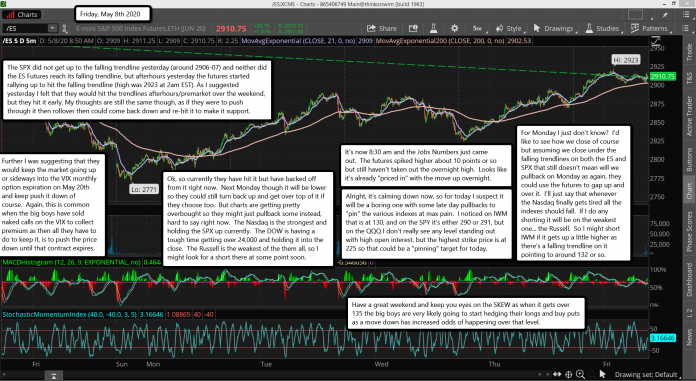 The SPX did not get up to the falling trendline yesterday (around 2906-07) and neither did the ES Futures reach its falling trendline, but afterhours yesterday the futures started rallying up to hit the falling trendline (high was 2923 at 2am EST). As I suggested yesterday I felt that they would hit the trendlines afterhours/premarket over the weekend, but they hit it early. My thoughts are still the same though, as if they were to push through it then rollover then could come back down and re-hit it to make it support.

Further I was suggesting that they would keep the market going up or sideways into the VIX monthly option expiration on May 20th and keep push it down of course.  Again, this is common when the big boys have sold naked calls on the VIX to collect premium as then all they have to do to keep it, is to push the price down until that contract expires.

Ok, so currently they have hit it but have backed off from it right now.  Next Monday though it will be lower so they could still turn back up and get over top of it if they choose too.  But charts are getting pretty overbought so they might just pullback some instead, hard to say right now.  The Nasdaq is the strongest and holding the SPX up currently.  The DOW is having a tough time getting over 24,000 and holding it into the close.  The Russell is the weakest of the them all, so I might look for a short there at some point soon.

It's now 8:30 am and the Jobs Numbers just came out.  The futures spiked higher about 10 points or so but still haven't taken out the overnight high.  Looks like it's already "priced in" with the move up overnight.

Alright, it's calming down now, so for today I suspect it will be a boring one with some late day pullbacks to "pin" the various indexes at max pain.  I noticed on IWM that is at 130, and on the SPY it's either 290 or 291, but on the QQQ I don't really see any level standing out with high open interest, but the highest strike price is at 225 so that could be a "pinning" target for today.

For Monday I just don't know?  I'd like to see how we close of course but assuming we close under the falling trendlines on both the ES and SPX that still doesn't mean will we pullback on Monday as again, they could use the futures to gap up and over it.  I'll just say that whenever the Nasdaq finally gets tired all the indexes should fall.  If I do any shorting it will be on the weakest one... the Russell.  So I might short IWM if it gets up a little higher as there's a falling trendline on it pointing to around 132 or so.

Have a great weekend and keep you eyes on the SKEW as when it gets over 135 the big boys are very likely going to start hedging their longs and buy puts as a move down has increased odds of happening over that level.