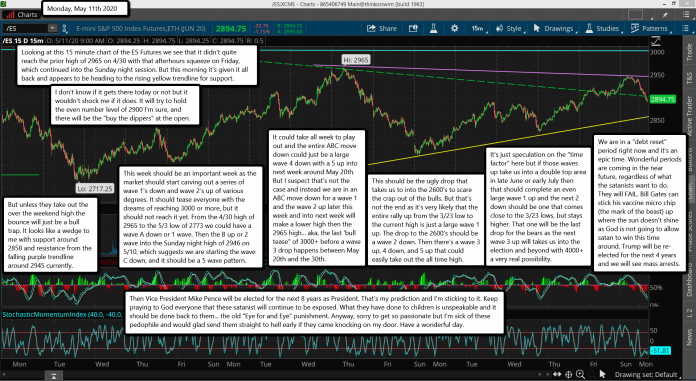 Looking at this 15 minute chart of the ES Futures we see that it didn't quite reach the prior high of 2965 on 4/30 with that afterhours squeeze on Friday, which continued into the Sunday night session. But this morning it's given it all back and appears to be heading to the rising yellow trendline for support.

I don't know if it gets there today or not but it wouldn't shock me if it does. It will try to hold the even number level of 2900 I'm sure, and there will be the "buy the dippers" at the open.

But unless they take out the over the weekend high the bounce will just be a bull trap. It looks like a wedge to me with support around 2858 and resistance from the falling purple trendline around 2945 currently.

This week should be an important week as the market should start carving out a series of wave 1's down and wave 2's up of various degrees. It should tease everyone with the dreams of reaching 3000 or more, but it should not reach it yet. From the 4/30 high of 2965 to the 5/3 low of 2773 we could have a wave A down or 1 wave. Then the B up or 2 wave into the Sunday night high of 2946 on 5/10, which suggests we are starting the wave C down, and it should be a 5 wave pattern.

It could take all week to play out and the entire ABC move down could just be a large wave 4 down with a 5 up into next week around May 20th. But I suspect that's not the case and instead we are in an ABC move down for a wave 1 and the wave 2 up later this week and into next week will make a lower high then the 2965 high... aka, the last 'bull tease" of 3000+ before a wave 3 drop happens between May 20th and the 30th.

This should be the ugly drop that takes us to into the 2600's to scare the crap out of the bulls. But that's not the end as it's very likely that the entire rally up from the 3/23 low to the current high is just a large wave 1 up. The drop to the 2600's should be a wave 2 down. Then there's a wave 3 up, 4 down, and 5 up that could easily take out the all time high.

It's just speculation on the "time factor" here but if those waves up take us into a double top area in late June or early July then that should complete an even large wave 1 up and the next 2 down should be one that comes close to the 3/23 lows, but stays higher. That one will be the last drop for the bears as the next wave 3 up will takes us into the election and beyond with 4000+ a very real possibility.

We are in a "debt reset" period right now and it's an epic time. Wonderful periods are coming in the near future, regardless of what the satanists want to do. They will FAIL. Bill Gates can stick his vaccine micro chip (the mark of the beast) up where the sun doesn't shine as God is not going to allow satan to win this time around. Trump will be re-elected for the next 4 years and we will see mass arrests.

Then Vice President Mike Pence will be elected for the next 8 years as President. That's my prediction and I'm sticking to it. Keep praying to God everyone that these satanist will continue to be exposed. What they have done to children is unspeakable and it should be done back to them... the old "Eye for and Eye" punishment. Anyway, sorry to get so passionate but I'm sick of these pedophile and would glad send them straight to hell early if they came knocking on my door. Have a wonderful day.