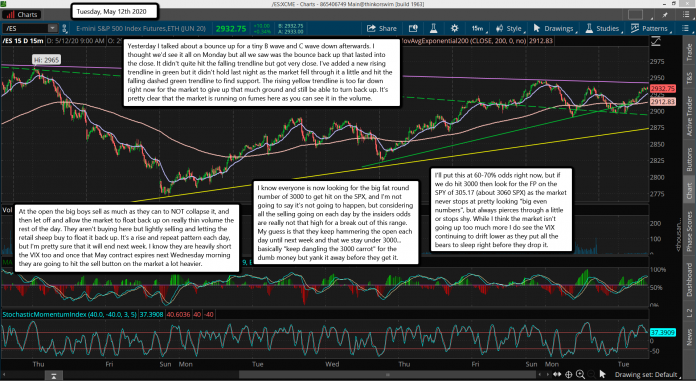 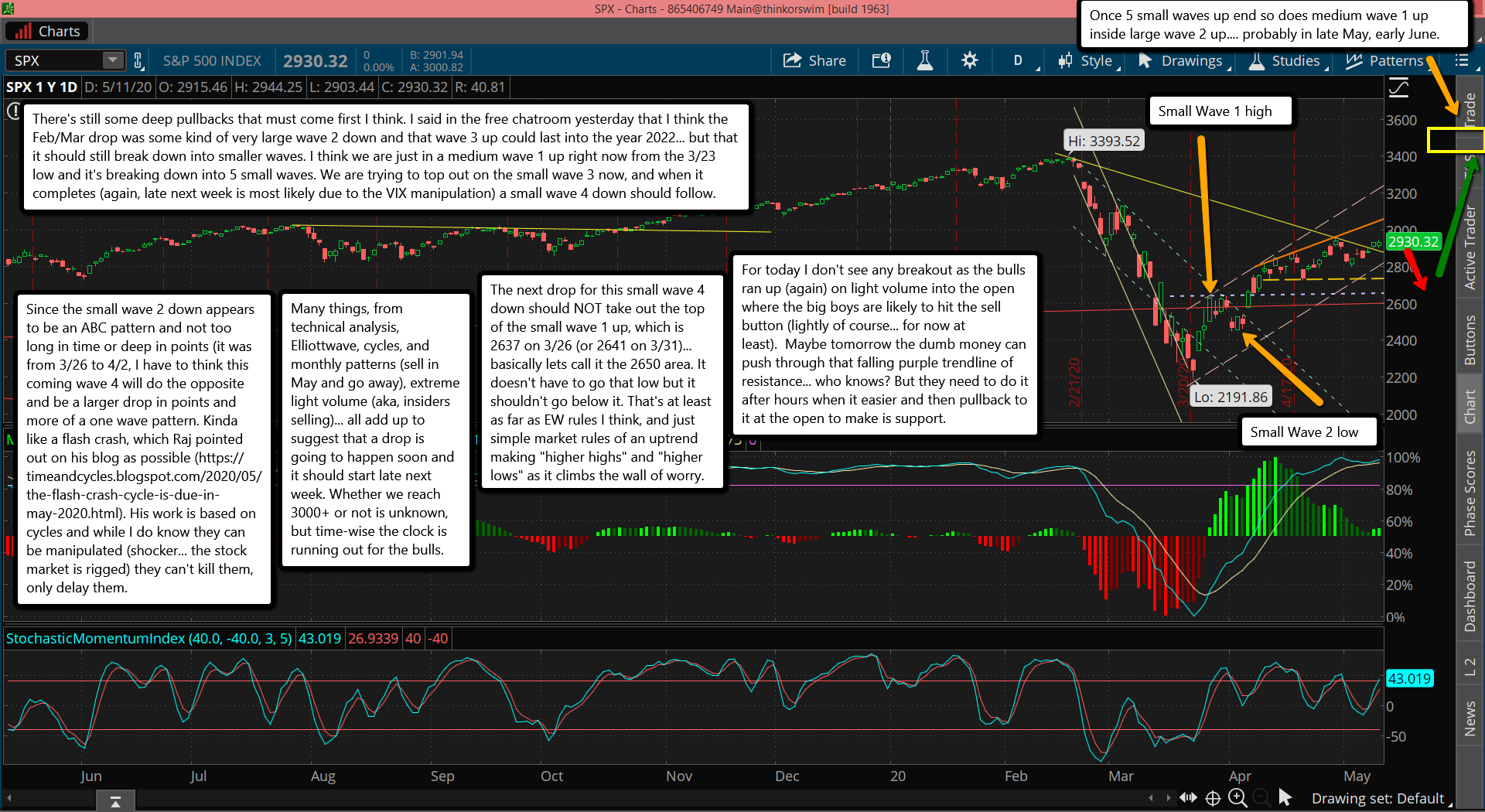 Yesterday I talked about a bounce up for a tiny B wave and C wave down afterwards. I thought we'd see it all on Monday but all we saw was the bounce back up that lasted into the close. It didn't quite hit the falling trendline but got very close. I've added a new rising trendline in green but it didn't hold last night as the market fell through it a little and hit the falling dashed green trendline to find support. The rising yellow trendline is too far down right now for the market to give up that much ground and still be able to turn back up. It's pretty clear that the market is running on fumes here as you can see it in the volume.

At the open the big boys sell as much as they can to NOT collapse it, and then let off and allow the market to float back up on really thin volume the rest of the day. They aren't buying here but lightly selling and letting the retail sheep buy to float it back up. It's a rise and repeat pattern each day, but I'm pretty sure that it will end next week. I know they are heavily short the VIX too and once that May contract expires next Wednesday morning they are going to hit the sell button on the market a lot heavier.

I know everyone is now looking for the big fat round number of 3000 to get hit on the SPX, and I'm not going to say it's not going to happen, but considering all the selling going on each day by the insiders odds are really not that high for a break out of this range. My guess is that they keep hammering the open each day until next week and that we stay under 3000... basically "keep dangling the 3000 carrot" for the dumb money but yank it away before they get it.

I'll put this at 60-70% odds right now, but if we do hit 3000 then look for the FP on the SPY of 305.17 (about 3060 SPX) as the market never stops at pretty looking "big even numbers", but always pierces through a little or stops shy. While I think the market isn't going up too much more I do see the VIX continuing to drift lower as they put all the bears to sleep right before they drop it. I'm including Peter Eliades latest video here...

Notice in his video that we are right in the middle zone where we've went through one of his offset lines but not the other. If we go up to 3000, (or the FP, which is more likely then stopping at just 3000) that will indeed confirm higher prices... like up to a double top. Now I do think we are going much higher, but later this year.

There's still some deep pullbacks that must come first I think. I said in the free chatroom yesterday that I think the Feb/Mar drop was some kind of very large wave 2 down and that wave 3 up could last into the year 2022... but that it should still break down into smaller waves. I think we are just in a medium wave 1 up right now from the 3/23 low and it's breaking down into 5 small waves. We are trying to top out on the small wave 3 now, and when it completes (again, late next week is most likely due to the VIX manipulation) a small wave 4 down should follow.

Since the small wave 2 down appears to be an ABC pattern and not too long in time or deep in points (it was from 3/26 to 4/2, I have to think this coming wave 4 will do the opposite and be a larger drop in points and more of a one wave pattern. Kinda like a flash crash, which Raj pointed out on his blog as possible (https://timeandcycles.blogspot.com/2020/05/the-flash-crash-cycle-is-due-in-may-2020.html). His work is based on cycles and while I do know they can be manipulated (shocker... the stock market is rigged) they can't kill them, only delay them.

Many things, from technical analysis, Elliottwave, cycles, and monthly patterns (sell in May and go away), extreme light volume (aka, insiders selling)... all add up to suggest that a drop is going to happen soon and it should start late next week. Whether we reach 3000+ or not is unknown, but time-wise the clock is running out for the bulls.

For today I don't see any breakout as the bulls ran up (again) on light volume into the open where the big boys are likely to hit the sell button (lightly of course... for now at least).  Maybe tomorrow the dumb money can push through that falling purple trendline of resistance... who knows? But they need to do it after hours when it easier and then pullback to it at the open to make is support.

Have a blessed and don't worry about satanist Bill Gates forcing a vaccine on us sheep. It's not going to happen. Trump mentions it around 10-12 minutes into this video.