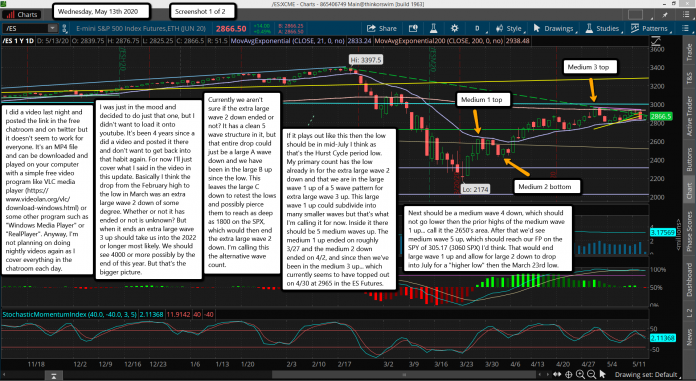 I did a video last night and posted the link in the free chatroom and on twitter but it doesn't seem to work for everyone. It's an MP4 file and can be downloaded and played on your computer with a simple free video program like VLC media player (https://www.videolan.org/vlc/download-windows.html) or some other program such as "Windows Media Player" or "RealPlayer". Anyway, I'm not planning on doing nightly videos again as I cover everything in the chatroom each day.

I uploaded it to BitChute for everyone..

I was just in the mood and decided to do just that one, but I didn't want to load it onto youtube. It's been 4 years since a did a video and posted it there and don't want to get back into that habit again. For now I'll just cover what I said in the video in this update. Basically I think the drop from the February high to the low in March was an extra large wave 2 down of some degree. Whether or not it has ended or not is unknown? But when it ends an extra large wave 3 up should take us into the 2022 or longer most likely. We should see 4000 or more possibly by the end of this year. But that's the bigger picture.

Currently we aren't sure if the extra large wave 2 down ended or not? It has a clean 5 wave structure in it, but that entire drop could just be a large A wave down and we have been in the large B up since the low. This leaves the large C down to retest the lows and possibly pierce them to reach as deep as 1800 on the SPX, which would then end the extra large wave 2 down. I'm calling this the alternative wave count.

If it plays out like this then the low should be in mid-July I think as that's the Hurst Cycle period low. My primary count has the low already in for the extra large wave 2 down and that we are in the large wave 1 up of a 5 wave pattern for extra large wave 3 up. This large wave 1 up could subdivide into many smaller waves but that's what I'm calling it for now. Inside it there should be 5 medium waves up. The medium 1 up ended on roughly 3/27 and the medium 2 down ended on 4/2, and since then we've been in the medium 3 up... which currently seems to have topped out on 4/30 at 2965 in the ES Futures. 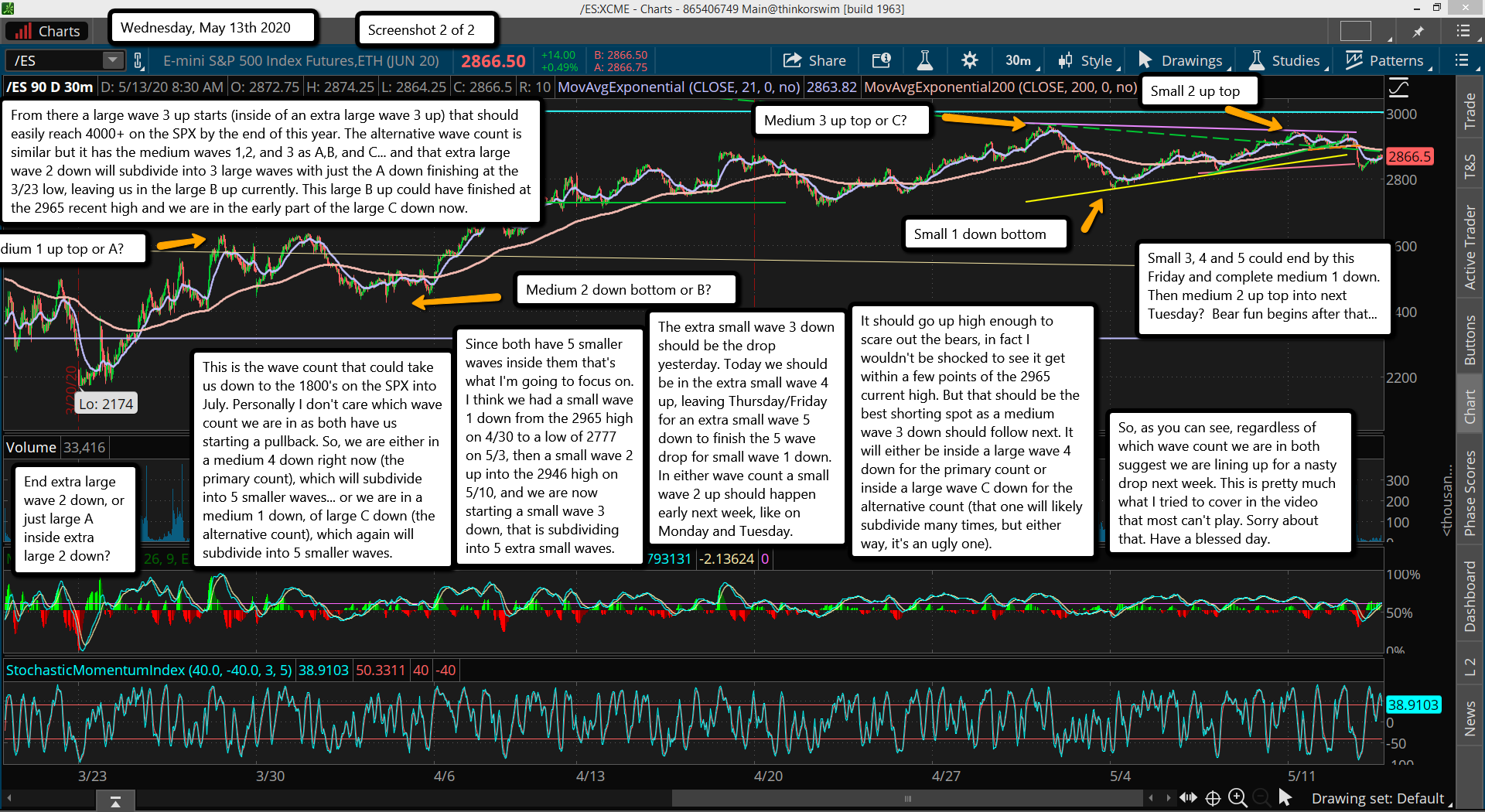 From there a large wave 3 up starts (inside of an extra large wave 3 up) that should easily reach 4000+ on the SPX by the end of this year. The alternative wave count is similar but it has the medium waves 1,2, and 3 as A,B, and C... and that extra large wave 2 down will subdivide into 3 large waves with just the A down finishing at the 3/23 low, leaving us in the large B up currently. This large B up could have finished at the 2965 recent high and we are in the early part of the large C down now.

This is the wave count that could take us down to the 1800's on the SPX into July. Personally I don't care which wave count we are in as both have us starting a pullback. So, we are either in a medium 4 down right now (the primary count), which will subdivide into 5 smaller waves... or we are in a medium 1 down, of large C down (the alternative count), which again will subdivide into 5 smaller waves.

It should go up high enough to scare out the bears, in fact I wouldn't be shocked to see it get within a few points of the 2965 current high. But that should be the best shorting spot as a medium wave 3 down should follow next. It will either be inside a large wave 4 down for the primary count or inside a large wave C down for the alternative count (that one will likely subdivide many times, but either way, it's an ugly one).

So, as you can see, regardless of which wave count we are in both suggest we are lining up for a nasty drop next week. This is pretty much what I tried to cover in the video that most can't play. Sorry about that. Have a blessed day.