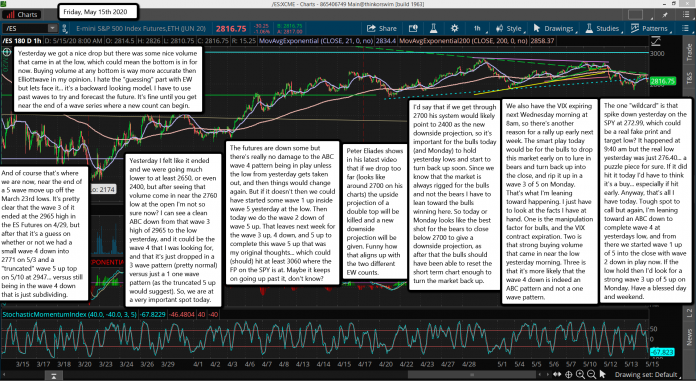 Yesterday we got a nice drop but there was some nice volume that came in at the low, which could mean the bottom is in for now. Buying volume at any bottom is way more accurate then Elliottwave in my opinion. I hate the "guessing" part with EW but lets face it... it's a backward looking model. I have to use past waves to try and forecast the future. It's fine until you get near the end of a wave series where a new count can begin.

Yesterday I felt like it ended and we were going much lower to at least 2650, or even 2400, but after seeing that volume come in near the 2760 low at the open I'm not so sure now? I can see a clean ABC down from that wave 3 high of 2965 to the low yesterday, and it could be the wave 4 that I was looking for, and that it's just dropped in a 3 wave pattern (pretty normal) versus just a 1 one wave pattern (as the truncated 5 up would suggest). So, we are at a very important spot today.

The futures are down some but there's really no damage to the ABC wave 4 pattern being in play unless the low from yesterday gets taken out, and then things would change again. But if it doesn't then we could have started some wave 1 up inside wave 5 yesterday at the low. Then today we do the wave 2 down of wave 5 up. That leaves next week for the wave 3 up, 4 down, and 5 up to complete this wave 5 up that was my original thoughts... which could (should) hit at least 3060 where the FP on the SPY is at. Maybe it keeps on going up past it, don't know?

Peter Eliades shows in his latest video that if we drop too far (looks like around 2700 on his charts) the upside projection of a double top will be killed and a new downside projection will be given. Funny how that aligns up with the two different EW counts.

I'd say that if we get through 2700 his system would likely point to 2400 as the new downside projection, so it's important for the bulls today (and Monday) to hold yesterday lows and start to turn back up soon. Since we know that the market is always rigged for the bulls and not the bears I have to lean toward the bulls winning here. So today or Monday looks like the best shot for the bears to close below 2700 to give a downside projection, as after that the bulls should have been able to reset the short term chart enough to turn the market back up.

We also have the VIX expiring next Wednesday morning at 8am, so there's another reason for a rally up early next week. The smart play today would be for the bulls to drop this market early on to lure in bears and turn back up into the close, and rip it up in a wave 3 of 5 on Monday. That's what I'm leaning toward happening. I just have to look at the facts I have at hand. One is the manipulation factor for bulls, and the VIX contract expiration. Two is that strong buying volume that came in near the low yesterday morning. Three is that it's more likely that the wave 4 down is indeed an ABC pattern and not a one wave pattern.

The one "wildcard" is that spike down yesterday on the SPY at 272.99, which could be a real fake print and target low? It happened at 9:40 am but the real low yesterday was just 276.40... a puzzle piece for sure. If it did hit it today I'd have to think it's a buy... especially if hit early. Anyway, that's all I have today. Tough spot to call but again, I'm leaning toward an ABC down to complete wave 4 at yesterdays low, and from there we started wave 1 up of 5 into the close with wave 2 down in play now. If the low hold then I'd look for a strong wave 3 up of 5 up on Monday. Have a blessed day and weekend.