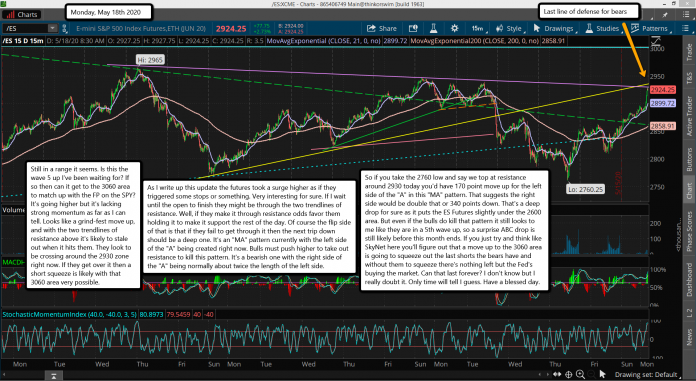 Still in a range it seems. Is this the wave 5 up I've been waiting for? If so then can it get to the 3060 area to match up with the FP on the SPY? It's going higher but it's lacking strong momentum as far as I can tell. Looks like a grind-fest move up, and with the two trendlines of resistance above it's likely to stale out when it hits them. They look to be crossing around the 2930 zone right now. If they get over it then a short squeeze is likely with that 3060 area very possible.

As I write up this update the futures took a surge higher as if they triggered some stops or something. Very interesting for sure. If I wait until the open to finish they might be through the two trendlines of resistance. Well, if they make it through resistance odds favor them holding it to make it support the rest of the day. Of course the flip side of that is that if they fail to get through it then the next trip down should be a deep one. It's an "MA" pattern currently with the left side of the "A" being created right now. Bulls must push higher to take out resistance to kill this pattern. It's a bearish one with the right side of the "A" being normally about twice the length of the left side.

So if you take the 2760 low and say we top at resistance around 2930 today you'd have 170 point move up for the left side of the "A" in this "MA" pattern. That suggests the right side would be double that or 340 points down. That's a deep drop for sure as it puts the ES Futures slightly under the 2600 area. But even if the bulls do kill that pattern it still looks to me like they are in a 5th wave up, so a surprise ABC drop is still likely before this month ends. If you just try and think like SkyNet here you'll figure out that a move up to the 3060 area is going to squeeze out the last shorts the bears have and without them to squeeze there's nothing left but the Fed's buying the market. Can that last forever? I don't know but I really doubt it. Only time will tell I guess. Have a blessed day.