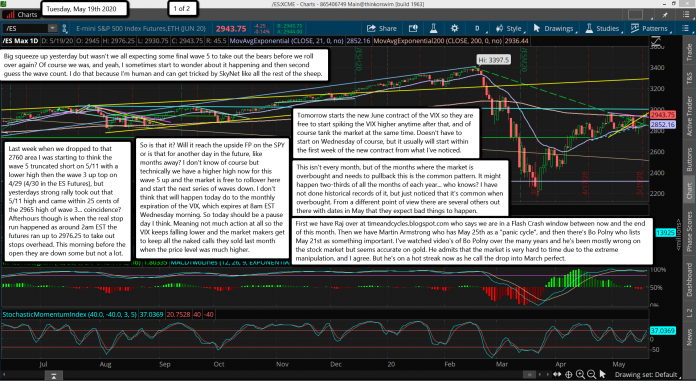 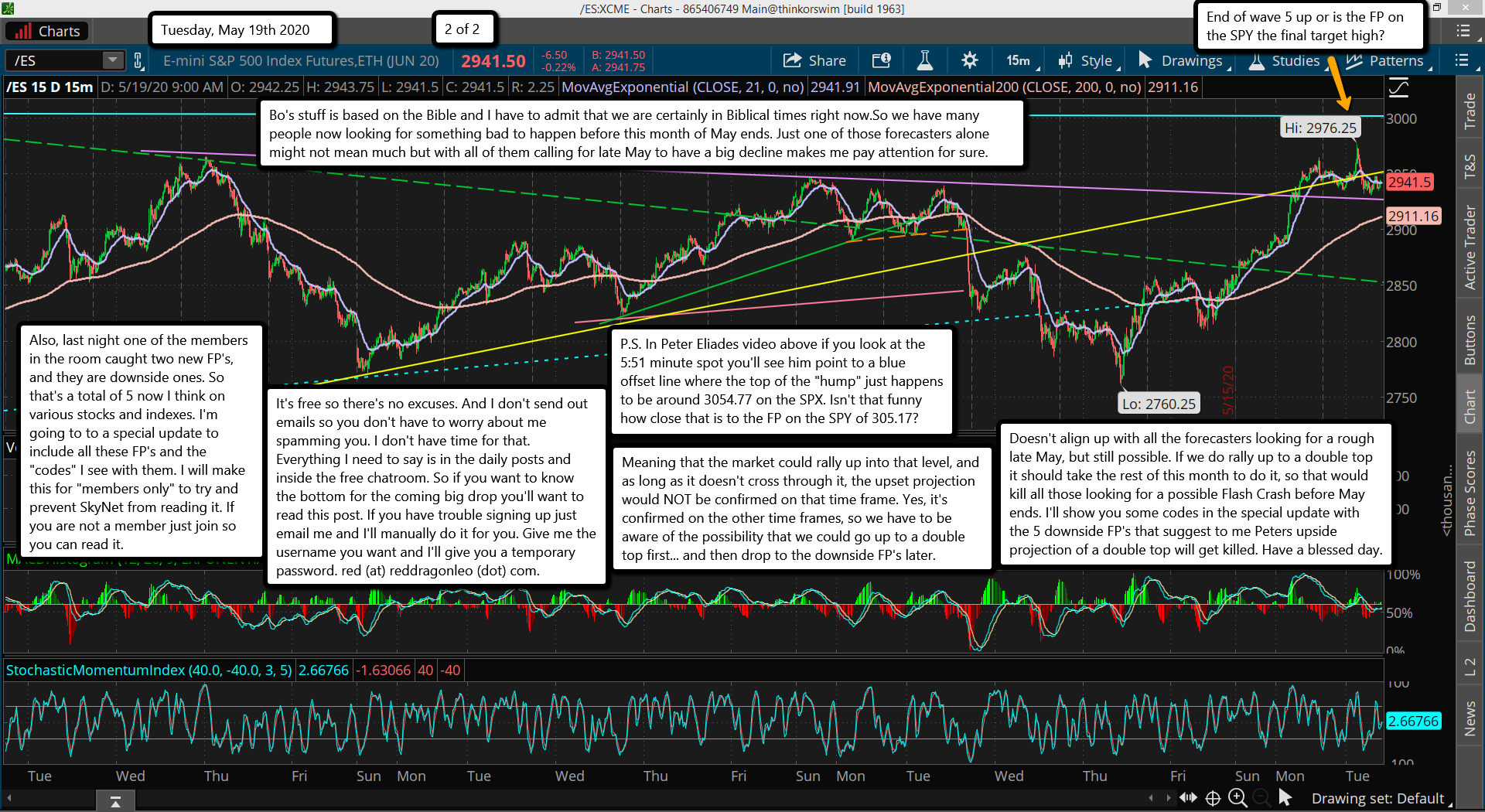 Big squeeze up yesterday but wasn't we all expecting some final wave 5 to take out the bears before we roll over again? Of course we was, and yeah, I sometimes start to wonder about it happening and then second guess the wave count. I do that because I'm human and can get tricked by SkyNet like all the rest of the sheep.

Last week when we dropped to that 2760 area I was starting to think the wave 5 truncated short on 5/11 with a lower high then the wave 3 up top on 4/29 (4/30 in the ES Futures), but yesterdays strong rally took out that 5/11 high and came within 25 cents of the 2965 high of wave 3... coincidence? Afterhours though is when the real stop run happened as around 2am EST the futures ran up to 2976.25 to take out stops overhead. This morning before the open they are down some but not a lot.

So is that it? Will it reach the upside FP on the SPY or is that for another day in the future, like months away? I don't know of course but technically we have a higher high now for this wave 5 up and the market is free to rollover here and start the next series of waves down. I don't think that will happen today do to the monthly expiration of the VIX, which expires at 8am EST Wednesday morning. So today should be a pause day I think. Meaning not much action at all so the VIX keeps falling lower and the market makers get to keep all the naked calls they sold last month when the price level was much higher.

Tomorrow starts the new June contract of the VIX so they are free to start spiking the VIX higher anytime after that, and of course tank the market at the same time. Doesn't have to start on Wednesday of course, but it usually will start within the first week of the new contract from what I've noticed.

This isn't every month, but of the months where the market is overbought and needs to pullback this is the common pattern. It might happen two-thirds of all the months of each year... who knows? I have not done historical records of it, but just noticed that it's common when overbought. From a different point of view there are several others out there with dates in May that they expect bad things to happen.

First we have Raj over at https://timeandcycles.blogspot.com/2020/05/the-flash-crash-cycle-is-due-in-may-2020.html who says we are in a Flash Crash window between now and the end of this month. Then we have Martin Armstrong who has May 25th as a "panic cycle", and then there's Bo Polny who lists May 21st as something important. I've watched video's of Bo Polny over the many years and he's been mostly wrong on the stock market but seems accurate on gold. He admits that the market is very hard to time due to the extreme manipulation, and I agree. But he's on a hot streak now as he call the drop into March perfect. Here's his latest video interview with Greg Hunter.

His stuff is based on the Bible and I have to admit that we are certainly in Biblical times right now.

So we have many people now looking for something bad to happen before this month of May ends. Just one of those forecasters alone might not mean much but with all of them calling for late May to have a big decline makes me pay attention for sure.

Also, last night one of the members in the room caught two new FP's, and they are downside ones. So that's a total of 5 now I think on various stocks and indexes. I'm going to to a special update to include all these FP's and the "codes" I see with them. I will make this for "members only" to try and prevent SkyNet from reading it. If you are not a member just join so you can read it.

It's free so there's no excuses. And I don't send out emails so you don't have to worry about me spamming you. I don't have time for that. Everything I need to say is in the daily posts and inside the free chatroom. So if you want to know the bottom for the coming big drop you'll want to read this post. If you have trouble signing up just email me and I'll manually do it for you. Give me the username you want and I'll give you a temporary password. red (at) reddragonleo (dot) com. 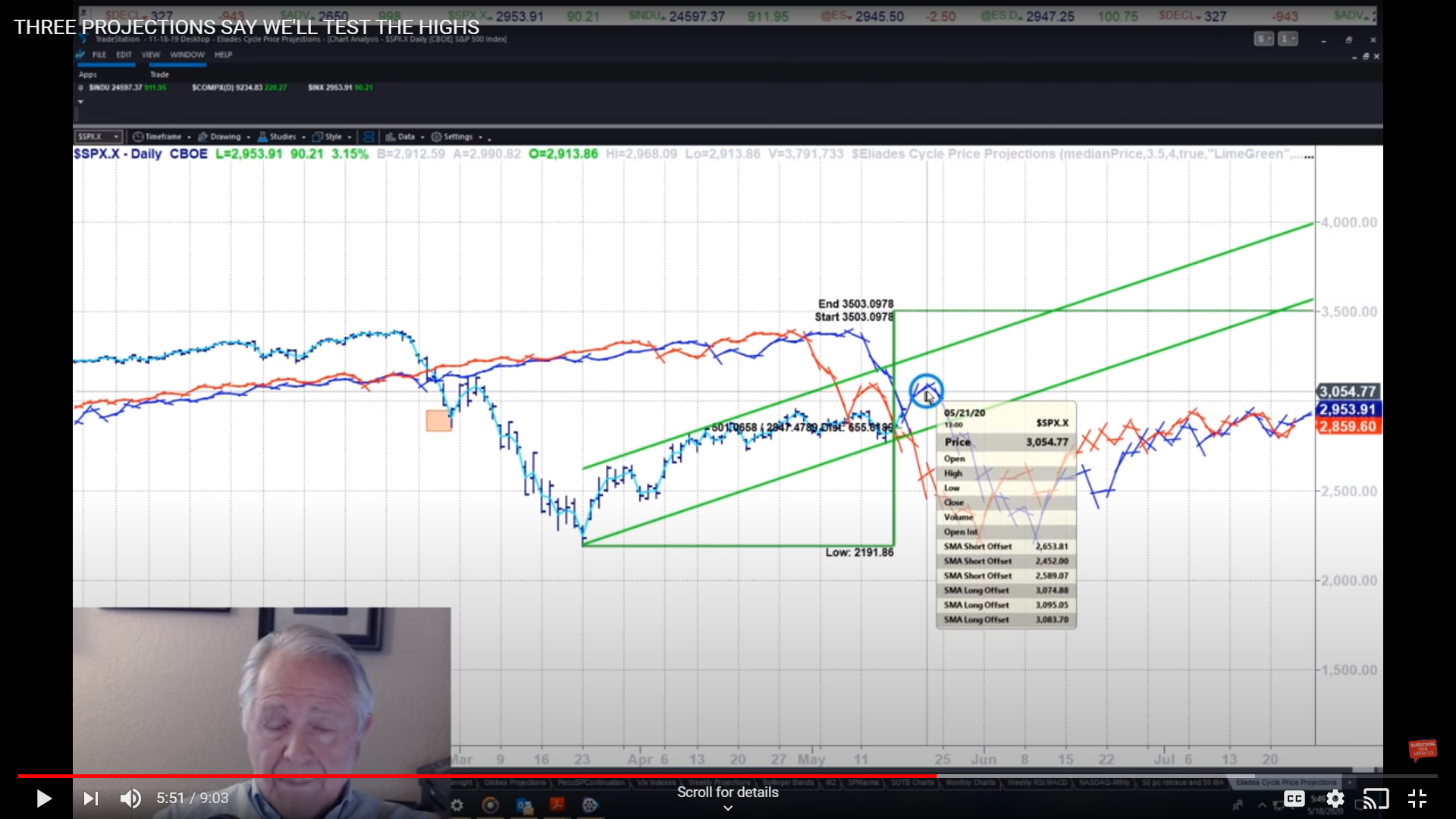 Meaning that the market could rally up into that level, and as long as it doesn't cross through it, the upset projection would NOT be confirmed on that time frame. Yes, it's confirmed on the other time frames, so we have to be aware of the possibility that we could go up to a double top first... and then drop to the downside FP's later.

Doesn't align up with all the forecasters looking for a rough late May, but still possible. If we do rally up to a double top it should take the rest of this month to do it, so that would kill all those looking for a possible Flash Crash before May ends. I'll show you some codes in the special update with the 5 downside FP's that suggest to me Peters upside projection of a double top will get killed. Have a blessed day.