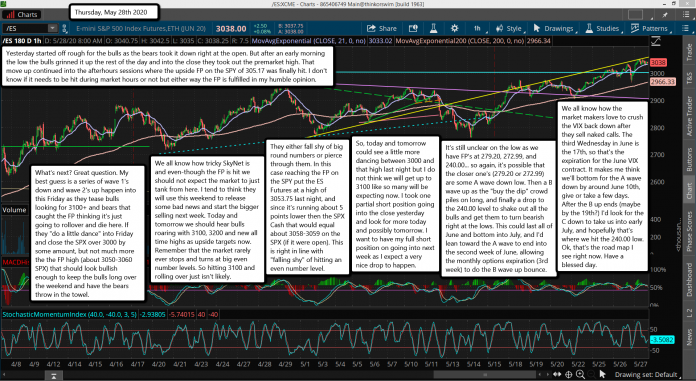 Yesterday started off rough for the bulls as the bears took it down right at the open. But after an early morning the low the bulls grinned it up the rest of the day and into the close they took out the premarket high. That move up continued into the afterhours sessions where the upside FP on the SPY of 305.17 was finally hit. I don't know if it needs to be hit during market hours or not but either way the FP is fulfilled in my humble opinion.

What's next? Great question. My best guess is a series of wave 1's down and wave 2's up happen into this Friday as they tease bulls looking for 3100+ and bears that caught the FP thinking it's just going to rollover and die here. If they "do a little dance" into Friday and close the SPX over 3000 by some amount, but not much more the the FP high (about 3050-3060 SPX) that should look bullish enough to keep the bulls long over the weekend and have the bears throw in the towel.

We all know how tricky SkyNet is and even-though the FP is hit we should not expect the market to just tank from here. I tend to think they will use this weekend to release some bad news and start the bigger selling next week. Today and tomorrow we should hear bulls roaring with 3100, 3200 and new all time highs as upside targets now. Remember that the market rarely ever stops and turns at big even number levels. So hitting 3100 and rolling over just isn't likely.

They either fall shy of big round numbers or pierce through them. In this case reaching the FP on the SPY put the ES Futures at a high of 3053.75 last night, and since it's running about 5 points lower then the SPX Cash that would equal about 3058-3059 on the SPX (if it were open). This is right in line with "falling shy" of hitting an even number level.

So, today and tomorrow could see a little more dancing between 3000 and that high last night but I do not think we will get up to 3100 like so many will be expecting now. I took one partial short position going into the close yesterday and look for more today and possibly tomorrow. I want to have my full short position on going into next week as I expect a very nice drop to happen.

We all know how the market makers love to crush the VIX back down after they sell naked calls. The third Wednesday in June is the 17th, so that's the expiration for the June VIX contract. It makes me think we'll bottom for the A wave down by around June 10th, give or take a few days. After the B up ends (maybe by the 19th?) I'd look for the C down to take us into early July, and hopefully that's where we hit the 240.00 low. Ok, that's the road map I see right now. Have a blessed day.