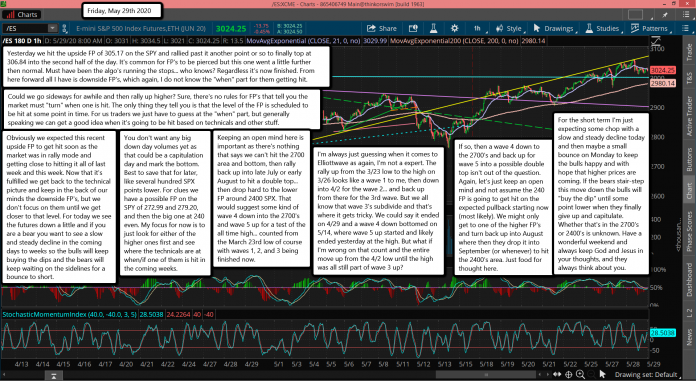 Yesterday we hit the upside FP of 305.17 on the SPY and rallied past it another point or so to finally top at 306.84 into the second half of the day. It's common for FP's to be pierced but this one went a little further then normal. Must have been the algo's running the stops... who knows? Regardless it's now finished. From here forward all I have is downside FP's, which again, I do not know the "when" part for them getting hit.

Could we go sideways for awhile and then rally up higher? Sure, there's no rules for FP's that tell you the market must "turn" when one is hit. The only thing they tell you is that the level of the FP is scheduled to be hit at some point in time. For us traders we just have to guess at the "when" part, but generally speaking we can get a good idea when it's going to be hit based on technicals and other stuff.

Obviously we expected this recent upside FP to get hit soon as the market was in rally mode and getting close to hitting it all of last week and this week. Now that it's fulfilled we get back to the technical picture and keep in the back of our minds the downside FP's, but we don't focus on them until we get closer to that level. For today we see the futures down a little and if you are a bear you want to see a slow and steady decline in the coming days to weeks so the bulls will keep buying the dips and the bears will keep waiting on the sidelines for a bounce to short.

You don't want any big down day volumes yet as that could be a capitulation day and mark the bottom. Best to save that for later, like several hundred SPX points lower. For clues we have a possible FP on the SPY of 272.99 and 279.20, and then the big one at 240 even. My focus for now is to just look for either of the higher ones first and see where the technicals are at when/if one of them is hit in the coming weeks.

Keeping an open mind here is important as there's nothing that says we can't hit the 2700 area and bottom, then rally back up into late July or early August to hit a double top... then drop hard to the lower FP around 2400 SPX. That would suggest some kind of wave 4 down into the 2700's and wave 5 up for a test of the all time high... counted from the March 23rd low of course with waves 1, 2, and 3 being finished now.

I'm always just guessing when it comes to Elliottwave as again, I'm not a expert. The rally up from the 3/23 low to the high on 3/26 looks like a wave 1 to me, then down into 4/2 for the wave 2... and back up from there for the 3rd wave. But we all know that wave 3's subdivide and that's where it gets tricky. We could say it ended on 4/29 and a wave 4 down bottomed on 5/14, where wave 5 up started and likely ended yesterday at the high. But what if I'm wrong on that count and the entire move up from the 4/2 low until the high was all still part of wave 3 up?

If so, then a wave 4 down to the 2700's and back up for wave 5 into a possible double top isn't out of the question. Again, let's just keep an open mind and not assume the 240 FP is going to get hit on the expected pullback starting now (most likely). We might only get to one of the higher FP's and turn back up into August where then they drop it into September (or whenever) to hit the 2400's area. Just food for thought here.

For the short term I'm just expecting some chop with a slow and steady decline today and then maybe a small bounce on Monday to keep the bulls happy and with hope that higher prices are coming. If the bears stair-step this move down the bulls will "buy the dip" until some point lower when they finally give up and capitulate. Whether that's in the 2700's or 2400's is unknown. Have a wonderful weekend and always keep God and Jesus in your thoughts, and they always think about you.