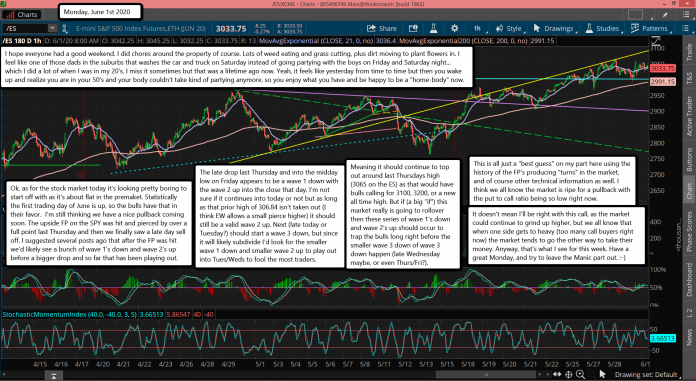 I hope everyone had a good weekend. I did chores around the property of course. Lots of weed eating and grass cutting, plus dirt moving to plant flowers in. I feel like one of those dads in the suburbs that washes the car and truck on Saturday instead of going partying with the boys on Friday and Saturday night... which I did a lot of when I was in my 20's. I miss it sometimes but that was a lifetime ago now. Yeah, it feels like yesterday from time to time but then you wake up and realize you are in your 50's and your body couldn't take kind of partying anymore, so you enjoy what you have and be happy to be a "home-body" now.

Ok, as for the stock market today it's looking pretty boring to start off with as it's about flat in the premaket. Statistically the first trading day of June is up, so the bulls have that in their favor.  I'm still thinking we have a nice pullback coming soon. The upside FP on the SPY was hit and pierced by over a full point last Thursday and then we finally saw a late day sell off. I suggested several posts ago that after the FP was hit we'd likely see a bunch of wave 1's down and wave 2's up before a bigger drop and so far that has been playing out.

The late drop last Thursday and into the midday low on Friday appears to be a wave 1 down with the wave 2 up into the close that day. I'm not sure if it continues into today or not but as long as that prior high of 306.84 isn't taken out (I think EW allows a small pierce higher) it should still be a valid wave 2 up. Next (late today or Tuesday?) should start a wave 3 down, but since it will likely subdivide I'd look for the smaller wave 1 down and smaller wave 2 up to play out into Tues/Weds to fool the most traders.

Meaning it should continue to top out around last Thursdays high (3065 on the ES) as that would have bulls calling for 3100, 3200, or a new all time high. But if (a big "if") this market really is going to rollover then these series of wave 1's down and wave 2's up should occur to trap the bulls long right before the smaller wave 3 down of wave 3 down happen (late Wednesday maybe, or even Thurs/Fri?).

This is all just a "best guess" on my part here using the history of the FP's producing "turns" in the market, and of course other technical information as well. I think we all know the market is ripe for a pullback with the put to call ratio being so low right now.

It doesn't mean I'll be right with this call, as the market could continue to grind up higher, but we all know that when one side gets to heavy (too many call buyers right now) the market tends to go the other way to take their money. Anyway, that's what I see for this week. Have a great Monday, and try to leave the Manic part out. 🙂