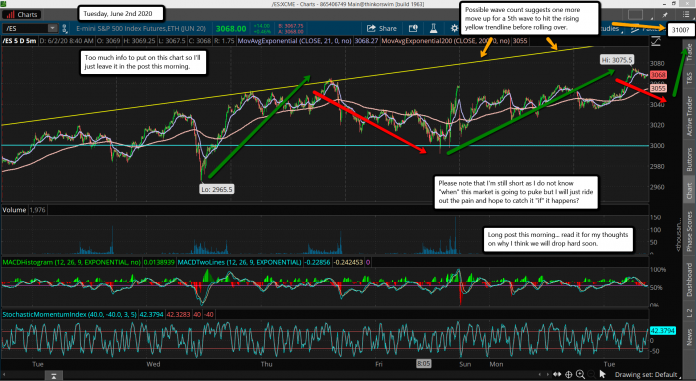 The futures are up this morning again to hit a high so far of 3075.50 squeezing more shorts it seems. At some point this is going to end badly... we all know it.

The "when" part though is the toughest thing to figure out. For now those it's just more pain for the bears. That FP now seems like a dud, or maybe it was a valid hit and pierce last Thursday but too many people are catching on to them and therefore they had to do one more squeeze? Who knows for sure? But something is brewing as the deep state just refuses to give up on their attack of President Trump. Love him or hate him isn't the issue here, as it's clear the deep state want him out. Everything they are doing though is failing.

The corona virus plandemic failed as Trump brought to light a cure for it with a 65 year old drug called Hydroxychloroquine, which is super cheap, like 10 cents a pill or something like that. It killed their plan to keep the economy shutdown going into the election, or even longer. It killed their dreams of a vaccine promoted by Bill Gates so they could chip us all with some nation ID card saying we took it (which would kill us most likely).

Their next plan is of course to "Divide and Conquer" by staging violent killings and protests involving blacks and whites.

Truly sad as I have zero hate toward any color of skin or race. I think most people feel that way as I have black friends I just love and they have no hate toward whites or anyone for that matter. It's just the deep state satanists trying to create hate through fear again. This killing (or fake killing... who knows?) of George Floyd is clearly a False Flag Event directed at dividing America... of course getting rid of Trump this coming election.

I guess they think all black people are stupid and won't see through this crap. I think they are much smarter and will flip to Republican this November in masses. I suspect Trump is going to win in a landslide. People in America are extremely friendly for the most part and do not hate each other over color or race like they want the world to believe. That event was staged using crisis actors like they did in the Boston Bombing and Sandy Hook school shootings.

Kinda looks like the same actor that was involved in the boston bombing false flag. https://twitter.com/dezorjetisanip1/status/1266916201470595073

Yesterday Trump called them out and labeled Antifa as a terrorist group, and it's pretty clear to me that's who is behind these events.

Here's more clues to suggest it was a Flase Flag...

Looks like the DC riots might not have even happened?   These street cameras don't show the protesters but empty streets.  Was it done in a Hollywood studio? https://twitter.com/Inevitable_ET/status/1267456450776850438

And finally this video shows men in a black suburban that likely work for the terrorist group Antifa (hired by the demon-crats?)
-

Everything about this killing smells of a false flag.  I don't know if they really killed the man or not as they are saying the policeman and George worked together as security at a night club. Very suspicious is all I'm thinking.  It's just another event to get Americans to hate each other.

False Flags have been going on for centuries...

They are trying to start a civil war in America just like like did back in the time of President Lincoln. Yes, that was the Queen and the Rothschilds back then as well. You didn't really think that was all about slavery did you?

In fact it was the north that had the most slaves, not the south. All the slaves were shipped into New York on boats and after the northern cities picked out what they wanted they sent the rest down south to be sold. Everything about that war was a lie.

The southern people did not want a civil war, but the Queen of England wanted control of America and had lost badly when she sent the British "Red Coats" to try to take us back in the War of Independence. So the new plan was to bankrupt America by getting us to fight ourselves... which worked. The winner would have to borrow money from the Queen to rebuild and that came with a big price of course.

President Lincoln seen through the banksters plan to take America by debt and refused to borrow money from the Queens bankers.

Instead he decided to print his own money for America and back it by the resources we had. This didn't go over to well with England, so they assassinated Lincoln and America was forced into debt with the central banksters of that time period. Of course we know that President Kennedy tried to get rid of the central banksters too, and you know what happened there.

Why do you think the elite satanists are trying so hard to get rid of Trump? Same reason. But so far Trump is winning. He succeeded in merging the central bank (called the Federal Reserve today) into the United States Treasury.

Both Lincoln and Kennedy felt the US Treasury should be the one printing money and not some foreign controlled  bank, so this is a good thing for America that Trump has done.

How did Trump succeed you ask?

In my humble opinion he knew the deep state banksters were planning the corona virus hoax to shutdown America. He liked decide to let the stock market fall much lower then they thought he would.  He knew that if he came in too early and stopped the decline with some kind of massive stimulus that the deep state would win, but if it let it crash then it would bankrupt them as well and force the Fed to be merged into the Treasury, which is exactly what happened.

Trump has God on his side, I firmly believe that.

These people are pure evil and God is tired of it I suspect. Like I said previously those Navy Red Cross ships that went to NYC and LA where NOT there for corona virus patients but for the children the military rescued from underground places the elite kept them in as their sex slaves.

What these people (Jeffery Epstein is just one of many) do to children is so sick it hurts my heart to even think about it. Anyway, I don't want to go down that road so let's get back on track.

What I think here is happening is that Trump will be force to use the military to enact martial law in the cities where the deep state is doing the False Flag events. He must stop this before it gets out of hand. At some point this is going to put fear back in the stock market and we will see a nasty drop happen. When is again hard to say but I think sooner then later it's going to rollover.

Many indicators I follow are primed and ready for another big drop to start. Like the put to call ratio for one, as well as the SKEW that's getting close to a danger level where big funds start worrying about a big drop and will buy hedges to protect themselves. This is a ticking time bomb I think and when it goes boom this market is going down hard and fast. These deep state satanists will not give up.

They will continue to stage more False Flags to try and divide America.

Don't fall for it! Love your neighbor like you always have, and pray to God to keep Trump safe as he's being attacked hard right now just like Lincoln and Kennedy was. Remember that the military asked him to run for president. He didn't choose it. But did to help out his fellow Americans. So while he may rub some people wrong he didn't need this job as he was already a Billionaire. Support him or support satan, the choice is yours. God bless America.

P.S. Sorry for the long post. Just had a lot on my mind this morning I guess.