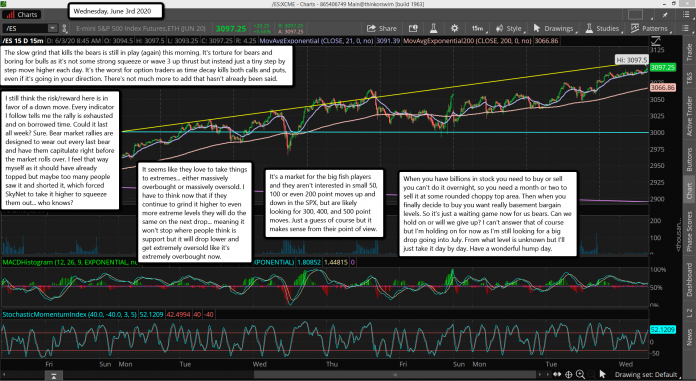 The slow grind that kills the bears is still in play (again) this morning. It's torture for bears and boring for bulls as it's not some strong squeeze or wave 3 up thrust but instead just a tiny step by step move higher each day. It's the worst for option traders as time decay kills both calls and puts, even if it's going in your direction. There's not much more to add that hasn't already been said.

I still think the risk/reward here is in favor of a down move. Every indicator I follow tells me the rally is exhausted and on borrowed time. Could it last all week? Sure. Bear market rallies are designed to wear out every last bear and have them capitulate right before the market rolls over. I feel that way myself as it should have already topped but maybe too many people saw it and shorted it, which forced SkyNet to take it higher to squeeze them out... who knows?

It seems like they love to take things to extremes... either massively overbought or massively oversold. I have to think now that if they continue to grind it higher to even more extreme levels they will do the same on the next drop... meaning it won't stop where people think is support but it will drop lower and get extremely oversold like it's extremely overbought now.

It's a market for the big fish players and they aren't interested in small 50, 100 or even 200 point moves up and down in the SPX, but are likely looking for 300, 400, and 500 point moves. Just a guess of course but it makes sense from their point of view.

When you have billions in stock you need to buy or sell you can't do it overnight, so you need a month or two to sell it at some rounded choppy top area. Then when you finally decide to buy you want really basement bargain levels. So it's just a waiting game now for us bears. Can we hold on or will we give up? I can't answer that of course but I'm holding on for now as I'm still looking for a big drop going into July. From what level is unknown but I'll just take it day by day. Have a wonderful hump day.

The video got removed from YouTube... again!  LOL!  I guess when you tell the truth and expose the hoax they have to remove your video.  The actor that played George Floyd seems to be playing a basketball player in this video who claims he's like a twin to him.   Yeah, twin huh?  How about the same person?  Everyone in this video are crisis actors for the deep state, even the women (about half way into it) that claim George was their cousin. Bottom line is that the entire event is staged.