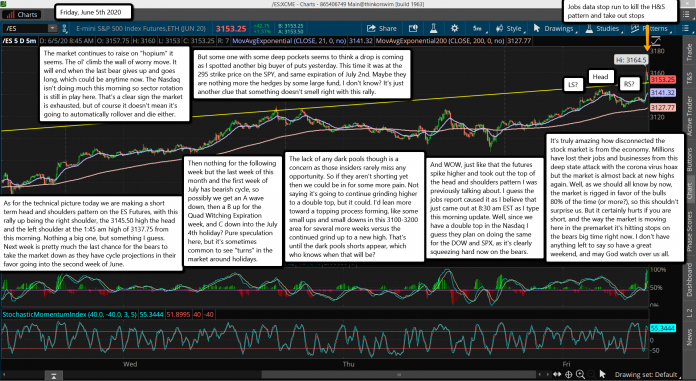 The market continues to raise on "hopium" it seems. The ol' climb the wall of worry move. It will end when the last bear gives up and goes long, which could be anytime now. The Nasdaq isn't doing much this morning so sector rotation is still in play here. That's a clear sign the market is exhausted, but of course it doesn't mean it's going to automatically rollover and die either.

But some one with some deep pockets seems to think a drop is coming as I spotted another big buyer of puts yesterday. This time it was at the 295 strike price on the SPY, and same expiration of July 2nd. Maybe they are nothing more the hedges by some large fund, I don't know? It's just another clue that something doesn't smell right with this rally. 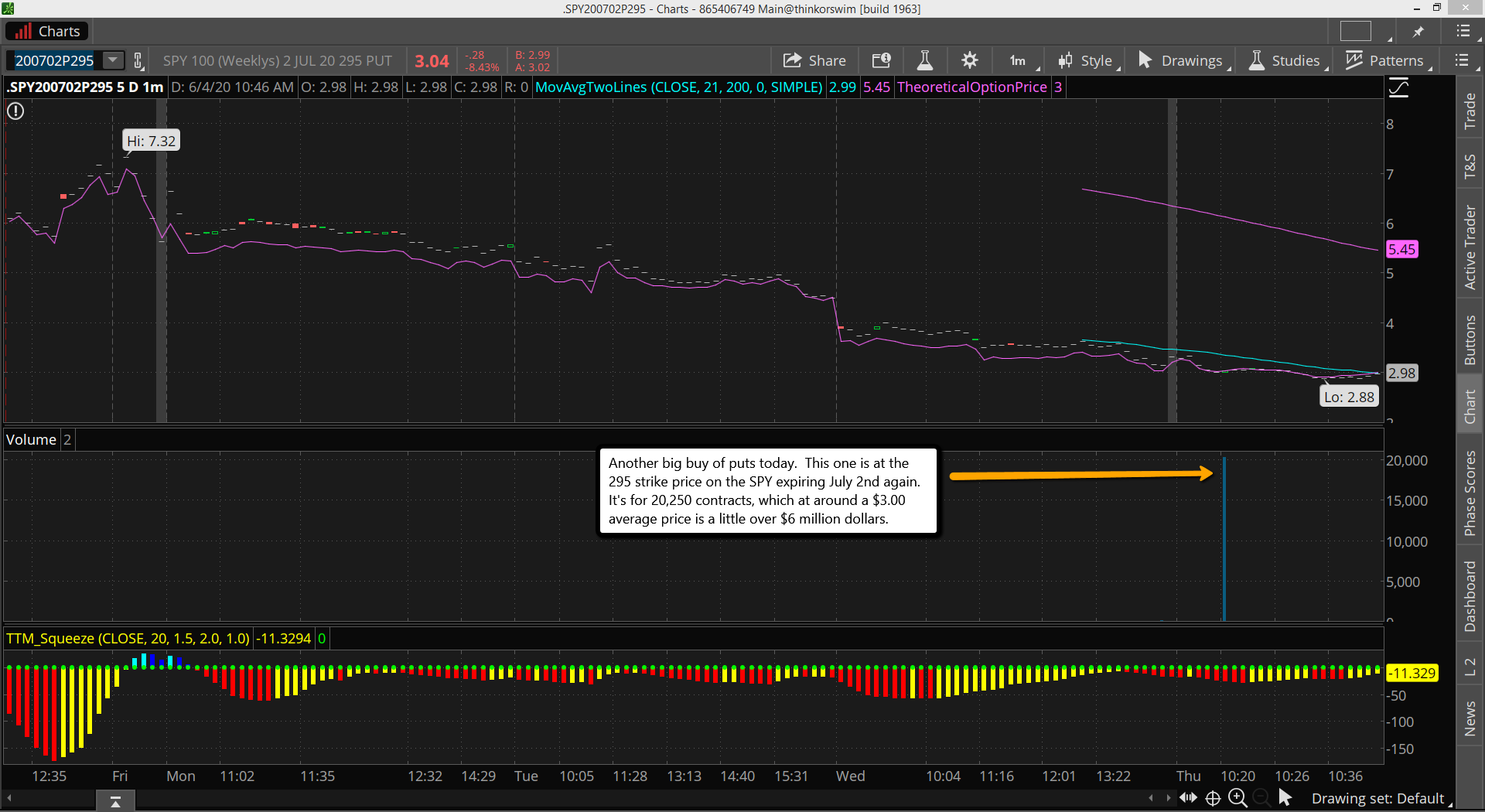 As for the technical picture today we are making a short term head and shoulders pattern on the ES Futures, with this rally up being the right shoulder, the 3145.50 high the head and the left shoulder at the 1:45 am high of 3137.75 from this morning. Nothing a big one, but something I guess. Next week is pretty much the last chance for the bears to take the market down as they have cycle projections in their favor going into the second week of June.

Then nothing for the following week but the last week of this month and the first week of July has bearish cycle, so possibly we get an A wave down, then a B up for the Quad Witching Expiration week, and C down into the July 4th holiday? Pure speculation here, but it's sometimes common to see "turns" in the market around holidays.

The lack of any dark pools though is a concern as those insiders rarely miss any opportunity. So if they aren't shorting yet then we could be in for some more pain. Not saying it's going to continue grinding higher to a double top, but it could. I'd lean more toward a topping process forming, like some small ups and small downs in this 3100-3200 area for several more weeks versus the continued grind up to a new high. That's until the dark pools shorts appear, which who knows when that will be?

And WOW, just like that the futures spike higher and took out the top of the head and shoulders pattern I was previously talking about. I guess the jobs report caused it as I believe that just came out at 8:30 am EST as I type this morning update. Well, since we have a double top in the Nasdaq I guess they plan on doing the same for the DOW and SPX, as it's clearly squeezing hard now on the bears.

It's truly amazing how disconnected the stock market is from the economy. Millions have lost their jobs and businesses from this deep state attack with the corona virus hoax but the market is almost back at new highs again. Well, as we should all know by now, the market is rigged in favor of the bulls 80% of the time (or more?), so this shouldn't surprise us. But it certainly hurts if you are short, and the way the market is moving here in the premarket it's hitting stops on the bears big time right now. I don't have anything left to say so have a great weekend, and may God watch over us all.