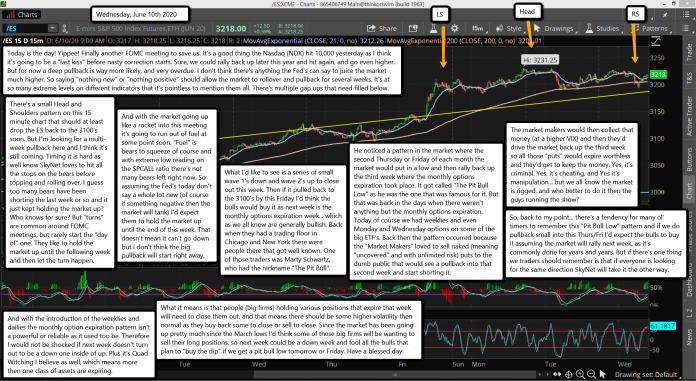 Today is the day! Yippee! Finally another FOMC meeting to save us. It's a good thing the Nasdaq (NDX) hit 10,000 yesterday as I think it's going to be a "last kiss" before nasty correction starts. Sure, we could rally back up later this year and hit again, and go even higher. But for now a deep pullback is way more likely, and very overdue. I don't think there's anything the Fed's can say to juice the market much higher. So saying "nothing new" or "nothing positive" should allow the market to rollover and pullback for several weeks. It's at so many extreme levels on different indicators that it's pointless to mention them all. There's multiple gap ups that need filled below.

There's a small Head and Shoulders pattern on this 15 minute chart that should at least drop the ES back to the 3100's soon. But I"m looking for a multi-week pullback here and I think it's still coming. Timing it is hard as well know SkyNet loves to hit all the stops on the bears before topping and rolling over. I guess too many bears have been shorting the last week or so and it just kept holding the market up? Who knows for sure? But "turns" are common around FOMC meetings, but rarely start the "day of" one. They like to hold the market up until the following week and then let the turn happen.

And with the market going up like a rocket into this meeting it's going to run out of fuel at some point soon. "Fuel" is bears to squeeze of course and with extreme low reading on the $PCALL ratio there's not many bears left right now. So assuming the Fed's today don't say a whole lot new (of course if something negative then the market will tank) I'd expect them to hold the market up until the end of this week. That doesn't mean it can't go down but I don't think the big pullback will start right away.

What I'd like to see is a series of small wave 1's down and wave 2's up to close out this week. Then if it pulled back to the 3100's by this Friday I'd think the bulls would buy it as next week is the monthly options expiration week... which as we all know are generally bullish. Back when they had a trading floor in Chicago and New York there were people there that got well known. One of those traders was Marty Schwartz, who had the nickname "The Pit Bull".

He noticed a pattern in the market where the second Thursday or Friday of each month the market would put in a low and then rally back up the third week where the monthly options expiration took place. It got called "The Pit Bull Low" as he was the one that was famous for it. But that was back in the days when there weren't anything but the monthly options expiration. Today of course we had weeklies and even Monday and Wednesday options on some of the big ETF's. Back then the pattern occurred because the "Market Makers" loved to sell naked (meaning "uncovered" and with unlimited risk) puts to the dumb public that would see a pullback into that second week and start shorting it.

The market makers would then collect that money (at a higher VIX) and then they'd drive the market back up the third week so all those "puts" would expire worthless and they'd get to keep the money. Yes, it's criminal. Yes, it's cheating, and Yes it's manipulation... but we all know the market is rigged, and who better to do it then the guys running the show?

So, back to my point... there's a tendency for many ol' timers to remember this "Pit Bull Low" pattern and if we do pullback small into this Thurs/Fri I'd expect the bulls to buy it assuming the market will rally next week, as it's commonly done for years and years. But if there's one thing we traders should remember is that if everyone is looking for the same direction SkyNet will take it the other way.

And with the introduction of the weeklies and dailies the monthly option expiration pattern isn't a powerful or reliable as it used too be. Therefore I would not be shocked if next week doesn't turn out to be a down one inside of up. Plus it's Quad Witching I believe as well, which means more then one class of assets are expiring. Here's a link explaining it: https://www.dictionary.com/e/quadruple-witching-day/

What it means is that people (big firms) holding various positions that expire that week will need to close them out, and that means there should be some higher volatility then normal as they buy back some to close or sell to close. Since the market has been going up pretty much since the March lows I'd think some of these big firms will be wanting to sell their long positions, so next week could be a down week and fool all the bulls that plan to "buy the dip" if we get a pit bull low tomorrow or Friday. Have a blessed day. 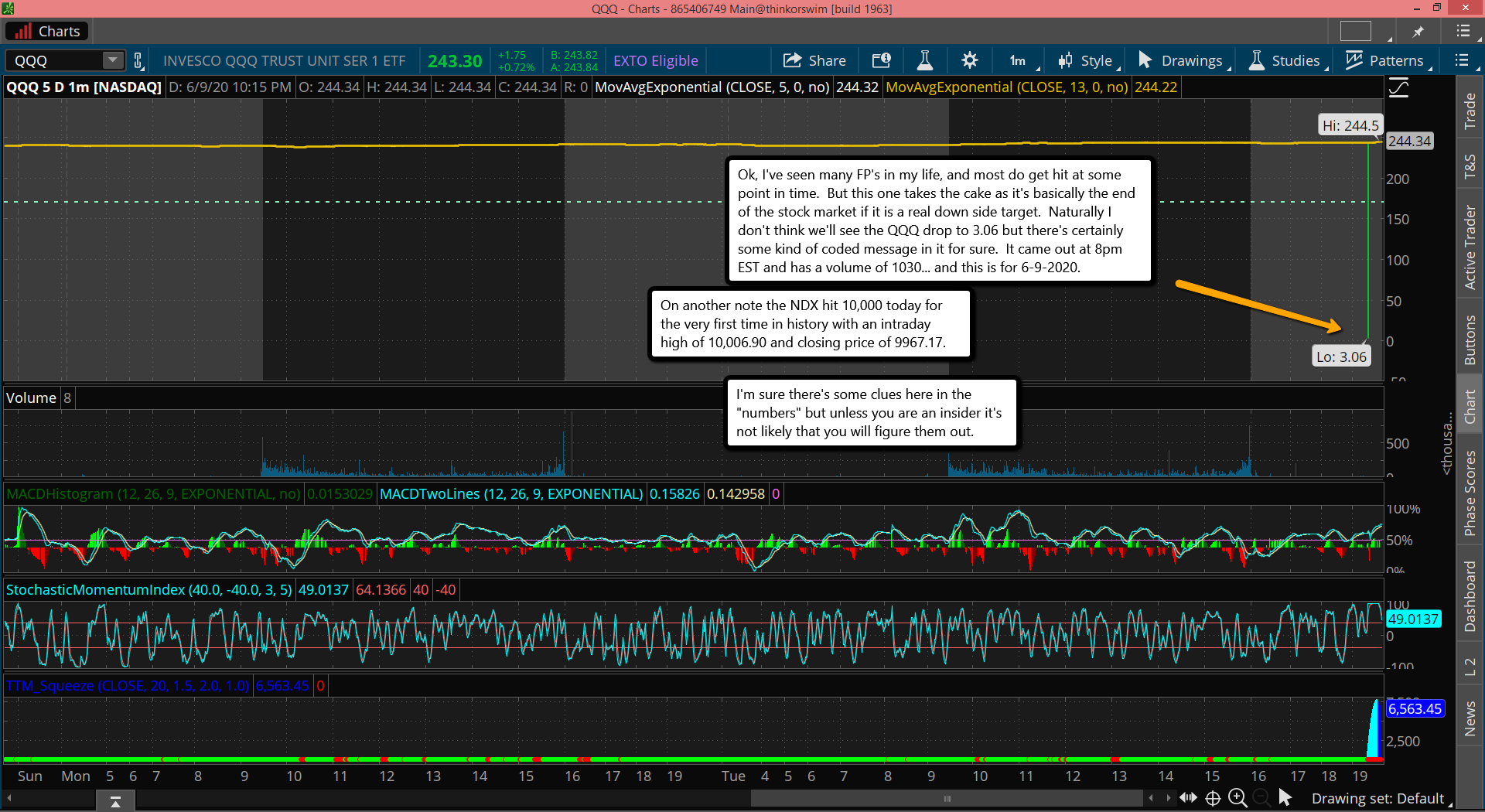