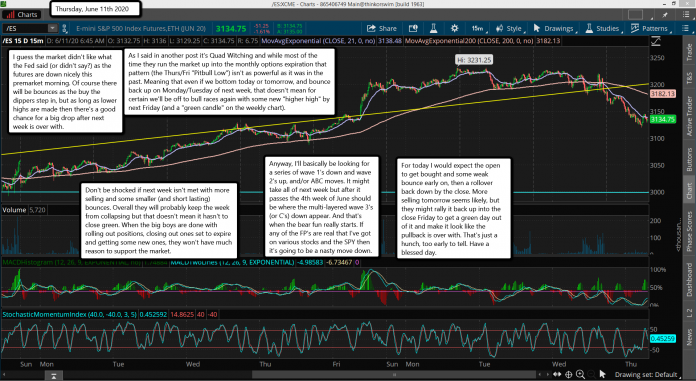 I guess the market didn't like what the Fed said (or didn't say?) as the futures are down nicely this premarket morning. Of course there will be bounces as the buy the dippers step in, but as long as lower highs are made then there's a good chance for a big drop after next week is over with.

As I said in another post it's Quad Witching and while most of the time they run the market up into the monthly options expiration that pattern (the Thurs/Fri "Pitbull Low") isn't as powerful as it was in the past. Meaning that even if we bottom today or tomorrow, and bounce back up on Monday/Tuesday of next week, that doesn't mean for certain we'll be off to bull races again with some new "higher high" by next Friday (and a "green candle" on the weekly chart).

Don't be shocked if next week isn't met with more selling and some smaller (and short lasting) bounces. Overall they will probably keep the week from collapsing but that doesn't mean it hasn't to close green. When the big boys are done with rolling out positions, closing out ones set to expire and getting some new ones, they won't have much reason to support the market.

Anyway, I'll basically be looking for a series of wave 1's down and wave 2's up, and/or ABC moves. It might take all of next week but after it passes the 4th week of June should be where the multi-layered wave 3's (or C's) down appear. And that's when the bear fun really starts. If any of the FP's are real that I've got on various stocks and the SPY then it's going to be a nasty move down.

For today I would expect the open to get bought and some weak bounce early on, then a rollover back down by the close. More selling tomorrow seems likely, but they might rally it back up into the close Friday to get a green day out of it and make it look like the pullback is over with. That's just a hunch, too early to tell. Have a blessed day.