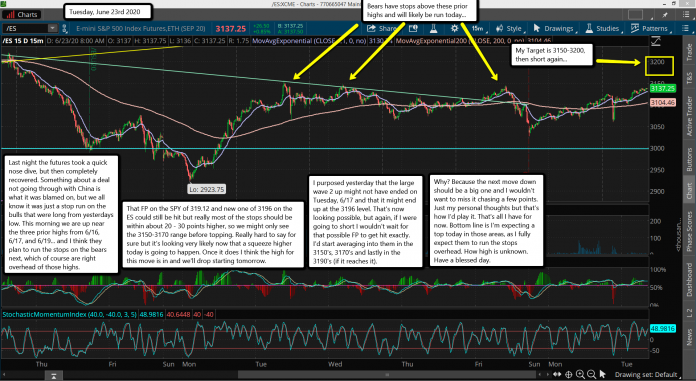 Last night the futures took a quick nose dive, but then completely recovered. Something about a deal not going through with China is what it was blamed on, but we all know it was just a stop run on the bulls that were long from yesterdays low. This morning we are up near the three prior highs from 6/16, 6/17, and 6/19... and I think they plan to run the stops on the bears next, which of course are right overhead of those highs.

That FP on the SPY of 319.12 and new one of 3196 on the ES could still be hit but really most of the stops should be within about 20 - 30 points higher, so we might only see the 3150-3170 range before topping. Really hard to say for sure but it's looking very likely now that a squeeze higher today is going to happen. Once it does I think the high for this move is in and we'll drop starting tomorrow.

I purposed yesterday that the large wave 2 up might not have ended on Tuesday, 6/17 and that it might end up at the 3196 level. That's now looking possible, but again, if I were going to short I wouldn't wait for that possible FP to get hit exactly. I'd start averaging into them in the 3150's, 3170's and lastly in the 3190's (if it reaches it).

Why? Because the next move down should be a big one and I wouldn't want to miss it chasing a few points. Just my personal thoughts but that's how I'd play it. That's all I have for now. Bottom line is I'm expecting a top today in those areas, as I fully expect them to run the stops overhead. How high is unknown. Have a blessed day.