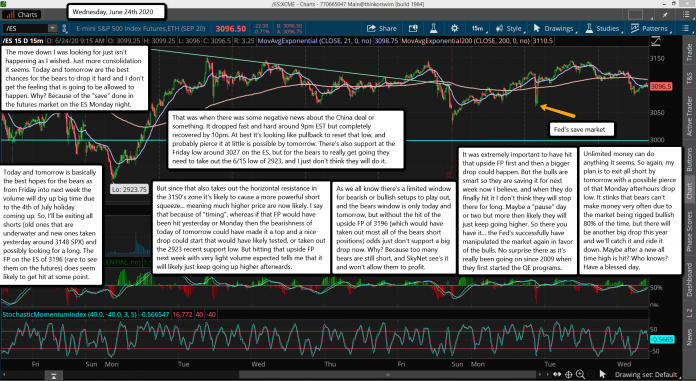 The move down I was looking for just isn't happening as I wished. Just more consolidation it seems. Today and tomorrow are the best chances for the bears to drop it hard and I don't get the feeling that is going to be allowed to happen. Why? Because of the "save" done in the futures market on the ES Monday night.

That was when there was some negative news about the China deal or something. It dropped fast and hard around 9pm EST but completely recovered by 10pm. At best it's looking like pullback to reset that low, and probably pierce it at little is possible by tomorrow. There's also support at the Friday low around 3027 on the ES, but for the bears to really get going they need to take out the 6/15 low of 2923, and I just don't think they will do it.

Today and tomorrow is basically the best hopes for the bears as from Friday into next week the volume will dry up big time due to the 4th of July holiday coming up. So, I'll be exiting all shorts (old ones that are underwater and new ones taken yesterday around 3148 SPX) and possibly looking for a long. The FP on the ES of 3196 (rare to see them on the futures) does seem likely to get hit at some point.

But since that also takes out the horizontal resistance in the 3150's zone it's likely to cause a more powerful short squeeze... meaning much higher price are now likely. I say that because of "timing", whereas if that FP would have been hit yesterday or Monday then the bearishness of today of tomorrow could have made it a top and a nice drop could start that would have likely tested, or taken out the 2923 recent support low. But hitting that upside FP next week with very light volume expected tells me that it will likely just keep going up higher afterwards.

As we all know there's a limited window for bearish or bullish setups to play out, and the bears window is only today and tomorrow, but without the hit of the upside FP of 3196 (which would have taken out most all of the bears short positions) odds just don't support a big drop now. Why? Because too many bears are still short, and SkyNet see's it and won't allow them to profit.

It was extremely important to have hit that upside FP first and then a bigger drop could happen. But the bulls are smart so they are saving it for next week now I believe, and when they do finally hit it I don't think they will stop there for long. Maybe a "pause" day or two but more then likely they will just keep going higher. So there you have it... the Fed's successfully have manipulated the market again in favor of the bulls. No surprise there as it's really been going on since 2009 when they first started the QE programs.

Unlimited money can do anything it seems. So again, my plan is to exit all short by tomorrow with a possible pierce of that Monday afterhours drop low. It stinks that bears can't make money very often due to the market being rigged bullish 80% of the time, but there will be another big drop this year and we'll catch it and ride it down. Maybe after a new all time high is hit? Who knows? Have a blessed day.