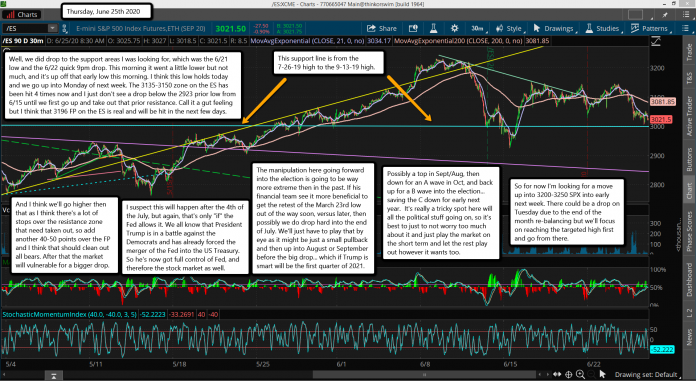 Well, we did drop to the support areas I was looking for, which was the 6/21 low and the 6/22 quick 9pm drop. This morning it went a little lower but not much, and it's up off that early low this morning. I think this low holds today and we go up into Monday of next week. The 3135-3150 zone on the ES has been hit 4 times now and I just don't see a drop below the 2923 prior low from 6/15 until we first go up and take out that prior resistance. Call it a gut feeling but I think that 3196 FP on the ES is real and will be hit in the next few days.

And I think we'll go higher then that as I think there's a lot of stops over the resistance zone that need taken out, so add another 40-50 points over the FP and I think that should clean out all bears. After that the market will vulnerable for a bigger drop.

I suspect this will happen after the 4th of the July, but again, that's only "if" the Fed allows it. We all know that President Trump is in a battle against the Democrats and has already forced the merger of the Fed into the US Treasury. So he's now got full control of Fed, and therefore the stock market as well.

The manipulation here going forward into the election is going to be way more extreme then in the past. If his financial team see it more beneficial to get the retest of the March 23rd low out of the way soon, versus later, then possibly we do drop hard into the end of July. We'll just have to play that by eye as it might be just a small pullback and then up into August or September before the big drop... which if Trump is smart will be the first quarter of 2021.

Possibly a top in Sept/Aug, then down for an A wave in Oct, and back up for a B wave into the election... saving the C down for early next year.  It's really a tricky spot here will all the political stuff going on, so it's best to just to not worry too much about it and just play the market on the short term and let the rest play out however it wants too.

So for now I'm looking for a move up into 3200-3250 SPX into early next week. There could be a drop on Tuesday due to the end of the month re-balancing but we'll focus on reaching the targeted high first and go from there.

Have a wonderful day and be sure to watch the video below.