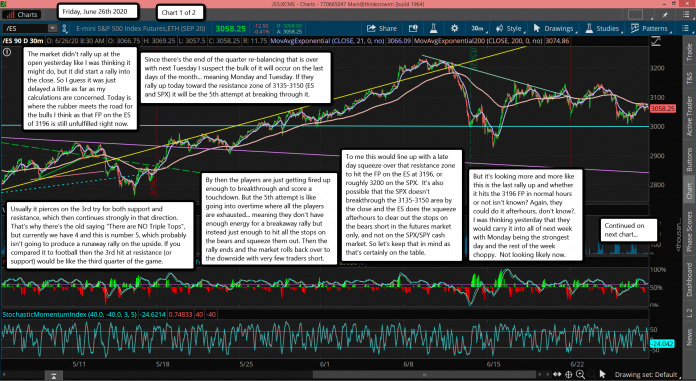 The market didn't rally up at the open yesterday like I was thinking it might do, but it did start a rally into the close. So I guess it was just delayed a little as far as my calculations are concerned. Today is where the rubber meets the road for the bulls I think as that FP on the ES of 3196 is still unfulfilled right now.

Since there's the end of the quarter re-balancing that is over with next Tuesday I suspect the bulk of it will occur on the last days of the month... meaning Monday and Tuesday. If they rally up today toward the resistance zone of 3135-3150 (ES and SPX) it will be the 5th attempt at breaking through it.

Usually it pierces on the 3rd try for both support and resistance, which then continues strongly in that direction. That's why there's the old saying "There are NO Triple Tops", but currently we have 4 and this is number 5, which probably isn't going to produce a runaway rally on the upside. If you compared it to football then the 3rd hit at resistance (or support) would be like the third quarter of the game.

By then the players are just getting fired up enough to breakthrough and score a touchdown. But the 5th attempt is like going into overtime where all the players are exhausted... meaning they don't have enough energy for a breakaway rally but instead just enough to hit all the stops on the bears and squeeze them out. Then the rally ends and the market rolls back over to the downside with very few traders short.

To me this would line up with a late day squeeze over that resistance zone to hit the FP on the ES at 3196, or roughly 3200 on the SPX.  It's also possible that the SPX doesn't breakthrough the 3135-3150 area by the close and the ES does the squeeze afterhours to clear out the stops on the bears short in the futures market only, and not on the SPX/SPY cash market. So let's keep that in mind as that's certainly on the table.

But it's looking more and more like this is the last rally up and whether it hits the 3196 FP in normal hours or not isn't known? Again, they could do it afterhours, don't know?. I was thinking yesterday that they would carry it into all of next week with Monday being the strongest day and the rest of the week choppy.  Not looking likely now. 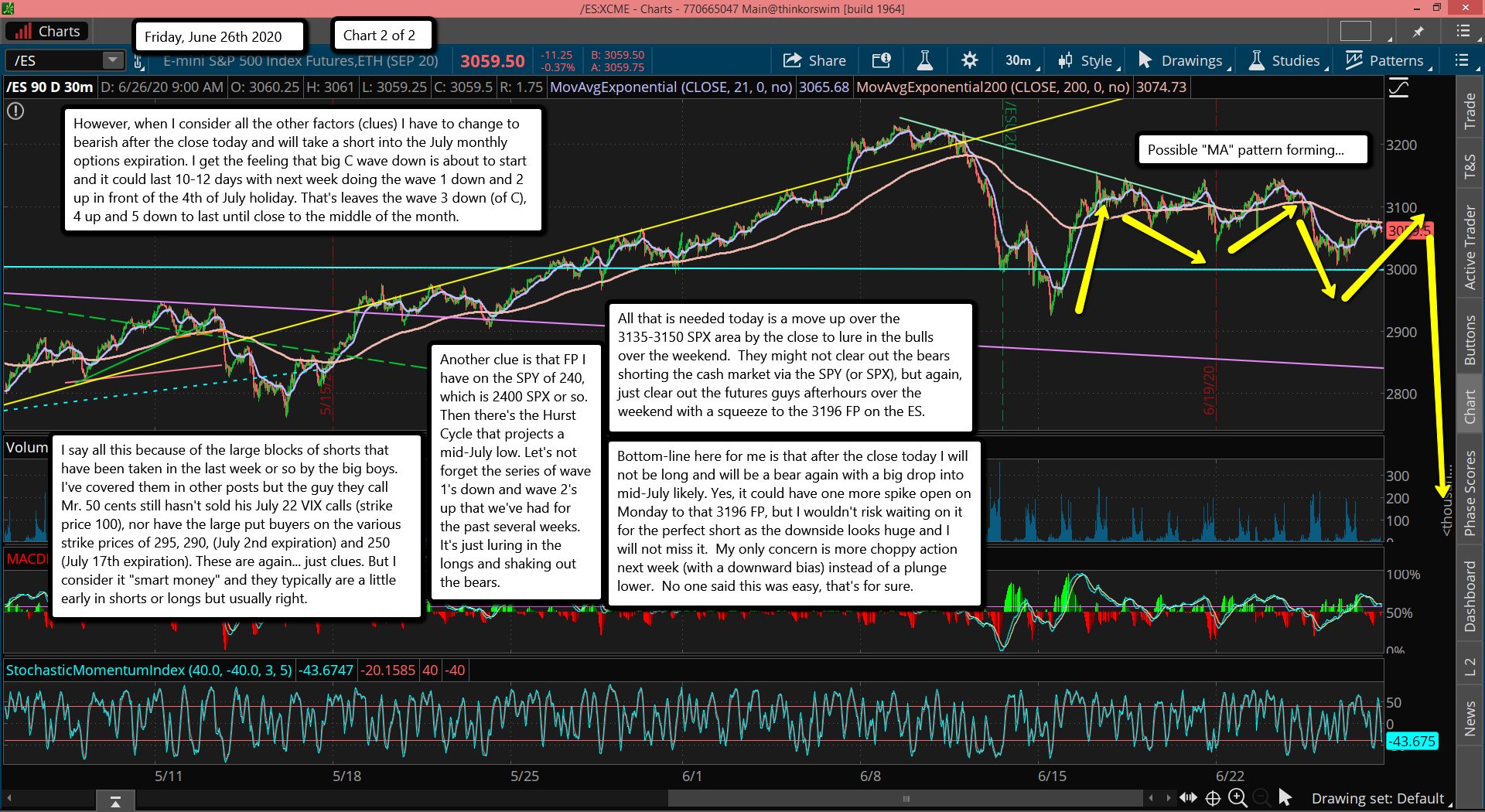 However, when I consider all the other factors (clues) I have to change to bearish after the close today and will take a short into the July monthly options expiration. I get the feeling that big C wave down is about to start and it could last 10-12 days with next week doing the wave 1 down and 2 up in front of the 4th of July holiday. That's leaves the wave 3 down (of C), 4 up and 5 down to last until close to the middle of the month.

I say all this because of the large blocks of shorts that have been taken in the last week or so by the big boys. I've covered them in other posts but the guy they call Mr. 50 cents still hasn't sold his July 22 VIX calls (strike price 100), nor have the large put buyers on the various strike prices of 295, 290, (July 2nd expiration) and 250 (July 17th expiration). These are again... just clues. But I consider it "smart money" and they typically are a little early in shorts or longs but usually right.

Another clue is that FP I have on the SPY of 240, which is 2400 SPX or so. Then there's the Hurst Cycle that projects a mid-July low. Let's not forget the series of wave 1's down and wave 2's up that we've had for the past several weeks. It's just luring in the longs and shaking out the bears.

Bottom-line here for me is that after the close today I will not be long and will be a bear again with a big drop into mid-July likely. Yes, it could have one more spike open on Monday to that 3196 FP, but I wouldn't risk waiting on it for the perfect short as the downside looks huge and I will not miss it.  My only concern is more choppy action next week (with a downward bias) instead of a plunge lower.  No one said this was easy, that's for sure.