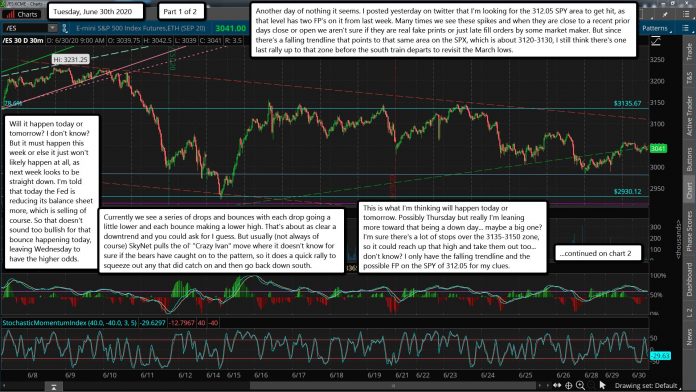 Another day of nothing it seems. I posted yesterday on twitter that I'm looking for the 312.05 SPY area to get hit, as that level has two FP's on it from last week. Many times we see these spikes and when they are close to a recent prior days close or open we aren't sure if they are real fake prints or just late fill orders by some market maker. But since there's a falling trendline that points to that same area on the SPX, which is about 3120-3130, I still think there's one last rally up to that zone before the south train departs to revisit the March lows.

Will it happen today or tomorrow? I don't know? But it must happen this week or else it just won't likely happen at all, as next week looks to be straight down. I'm told that today the Fed is reducing its balance sheet more, which is selling of course. So that doesn't sound too bullish for that bounce happening today, leaving Wednesday to have the higher odds.

Currently we see a series of drops and bounces with each drop going a little lower and each bounce making a lower high. That's about as clear a downtrend and you could ask for I guess. But usually (not always of course) SkyNet pulls the ol' "Crazy Ivan" move where it doesn't know for sure if the bears have caught on to the pattern, so it does a quick rally to squeeze out any that did catch on and then go back down south.

This is what I'm thinking will happen today or tomorrow. Possibly Thursday but really I'm leaning more toward that being a down day... maybe a big one? I'm sure there's a lot of stops over the 3135-3150 zone, so it could reach up that high and take them out too... don't know? I only have the falling trendline and the possible FP on the SPY of 312.05 for my clues. 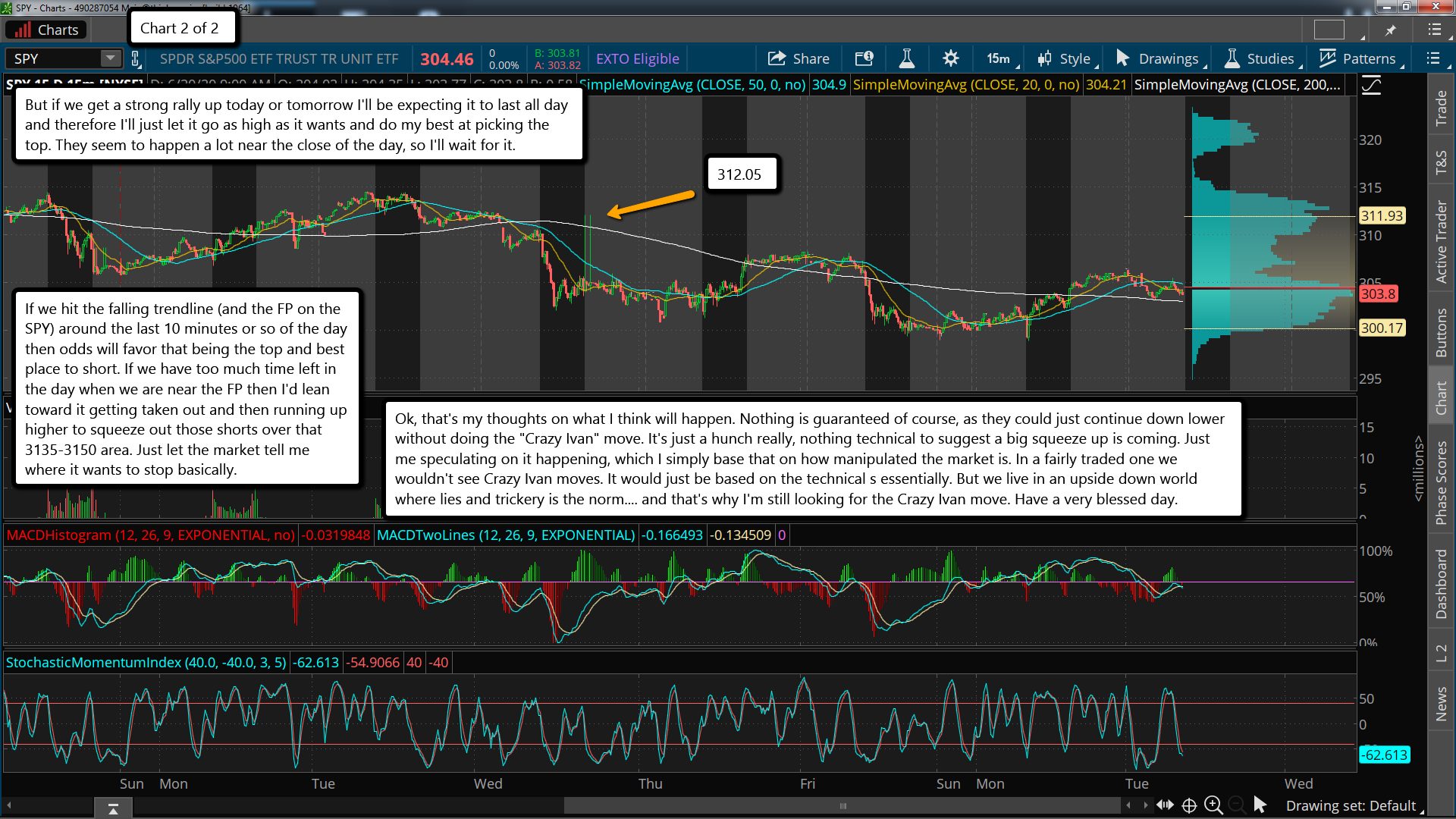 But if we get a strong rally up today or tomorrow I'll be expecting it to last all day and therefore I'll just let it go as high as it wants and do my best at picking the top. They seem to happen a lot near the close of the day, so I'll wait for it.

If we hit the falling trendline (and the FP on the SPY) around the last 10 minutes or so of the day then odds will favor that being the top and best place to short. If we have too much time left in the day when we are near the FP then I'd lean toward it getting taken out and then running up higher to squeeze out those shorts over that 3135-3150 area. Just let the market tell me where it wants to stop basically.

Ok, that's my thoughts on what I think will happen. Nothing is guaranteed of course, as they could just continue down lower without doing the "Crazy Ivan" move. It's just a hunch really, nothing technical to suggest a big squeeze up is coming. Just me speculating on it happening, which I simply base that on how manipulated the market is. In a fairly traded one we wouldn't see Crazy Ivan moves. It would just be based on the technical s essentially. But we live in an upside down world where lies and trickery is the norm.... and that's why I'm still looking for the Crazy Ivan move. Have a very blessed day.